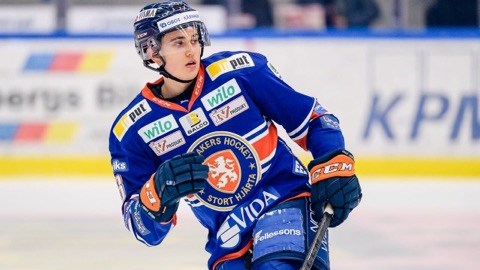 Lucas Edmonds in action with the Vaxjo Lakers. Photo submitted.

A North Bay native is one step closer to having the opportunity to play in the World Junior Hockey Championship next Christmas in Edmonton-Red Deer.

The only thing is it would be for Team Sweden, not Team Canada.

Lucas Edmonds, a dual citizen, has been named to Team Sweden's U19 team for the Five Nations Tournament which takes place in Berlin beginning February 4.

Edmonds, who plays left and right wing, has put up 16 goals along with 22 assists for 38 points in 31 games with the Vaxjo Lakers HC J20 team in Sweden. He has also been called up to a game with the SHL pro team this season.

Randy Edmonds, Lucas’ father who coached professionally in Sweden, says his son has made some tremendous sacrifices moving over to Sweden and they are starting to pay off.

Lucas Edmonds was a seventh-round pick of the Kingston Frontenacs in 2017 and turned down an NCAA Division One hockey commitment from UMass to play junior overseas in Sweden.

Edmonds was also featured in the Ugly Pucklings Podcast this fall which included his highlight-reel shootout winner over Frolunda.