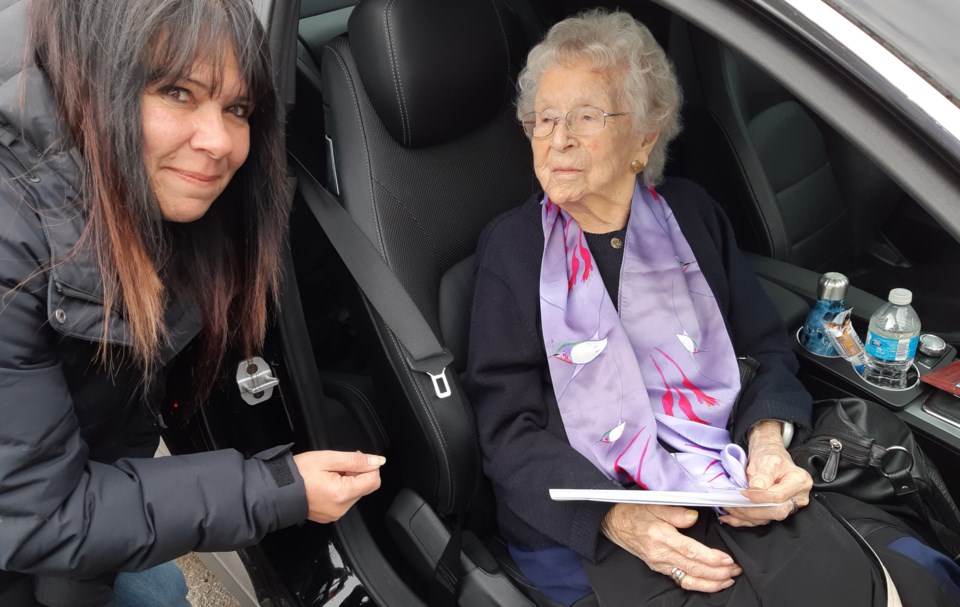 For Ruby Marsden Hicks, the resolution of a 95-year-old injustice translates into about 15 months rent she won't have to worry about paying at her Peterborough retirement home. She was one of an estimated 500 Alderville First Nation members who travelled to the community centre to pick up their per capita distribution cheques in person.

It was a long time coming,” says Ruby, the only current Alderville member -- and perhaps the only living member of all seven Mississauga and Chippewa First Nations -- who was alive when the federal and provincial governments imposed the Williams Treaties on them in 1923. “It would have really helped Ma and Pa.”

“Ma and Pa”were Moses Muskrat Marsden, Alderville First Nation Chief from 1905 to 1909, and his wife Nellie Orma Franklin. Ruby, the youngest and only survivor of their 13 children, remembers her parents' struggle to make ends meet after leaving their reserve – and their Indian status – for what they hoped would be a brighter future for themselves and their family.

She recalls growing up in the little village of Lakefield, where she was teased at school for being part of the first “Indian” family in the community. They rented a farmhouse until Moses parlayed his carpentry skills into enough cash to purchase a lot for their own home.

That was about 1919 – the year Ruby was born -- and “they were asking $300 for it,” she recalls. “My Dad always said they never thought an Indian could come up with that much money!”

Her parents spent most of their 64 years of married life in the little mortar and fieldstone house Moses built on that lot. They never enjoyed such luxuries as indoor plumbing, running water, or central heating. Nellie cooked family dinners on a woodstove had a pump for water in her closet-sized kitchen and lined the dirt walls of her root cellar with fruit and vegetable preserves.

Ruby remembers her father continuing his advocacy for Native rights long after he had left life on the reserve.

“He couldn't write very well – (he ran away from Alnwick Industrial Training School when he was 8) – so he dictated letters to newspapers and politicians to my mother for her to write.”

They maintained close ties with family members and friends in Alderville, and Moses attended the meeting on Nov. 19, 1923, when the three members of the Williams Treaty commission met with the community's “headmen” to try and convince them to sign away their rights to some 20,000 square miles of central Ontario land.

“The Indians only wanted to know if they would still have their hunting and fishing rights,” Moses would write years later. “And when they were told they would, they signed.” The Indian Act of the day forbade First Nations to hire lawyers to pursue their interests or protect their rights.

Included on the agenda of the official Nov. 17th treaty settlement ceremony at Casino Rama were apologies by federal and provincial governments for lying about the guarantee of those harvesting rights, a deliberate untruth that resulted in countless members of the First Nation signatory communities being persecuted and prosecuted over the years for “breaking the law”.

“We are sorry,” Carolyn Bennett, federal minister of Crown/Indigenous Relations, told chiefs from the seven Williams Treaty First Nations, noting that what academics have termed the worst treaty in Canadian history “continued injustices, provided insufficient compensation and inadequate reserve lands .... and failed to recognize and protect your treaty rights.”

Elder Doug Williams, a former Curve Lake First Nation chief, recalls some tactics community members had to resort to in order to continue providing food for their families when the treaty outlawed their traditional practices.

“One of our favourite tricks in winter was to plan our fishing expeditions for Saturday nights – we knew the game wardens would be watching Hockey Night in Canada!”

Ruby Marsden Hicks did not regain her Indian status until 1986. Her parents had both died before a change to the discriminatory membership provisions of the Indian Act would have reinstated the status they lost by leaving their reserve.

After accepting her long-overdue treaty cheque at the Alderville Community Centre, she agreed that the First Nations were wise in retaining a sizable portion of the settlement for future investments in land and community development.

“That kind of money can disappear pretty fast,” she says.

The $1.1- Billion settlement amounts to $85 an acre for the land which the Crown claims was “surrendered” by the terms of the Williams Treaties, from the shore of Lake Ontario to Lake Nipissing in the north, from Lake Huron east to the Ottawa River.

Maurice Switzer is a citizen of the Mississaugas of Alderville First Nation. He lives in North Bay, where he is the principal of Nimkii Communications, a public education practice with a focus on the treaty relationship.

OPINION Brown water better than none at all
Oct 27, 2017 5:30 PM
Comments
We welcome your feedback and encourage you to share your thoughts. We ask that you be respectful of others and their points of view, refrain from personal attacks and stay on topic. To learn about our commenting policies and how we moderate, please read our Community Guidelines.