'The City will be required to close this facility if this work is not undertaken and does not have the capacity to complete this work with internal forces'
Sep 17, 2020 1:00 PM By: Stu Campaigne 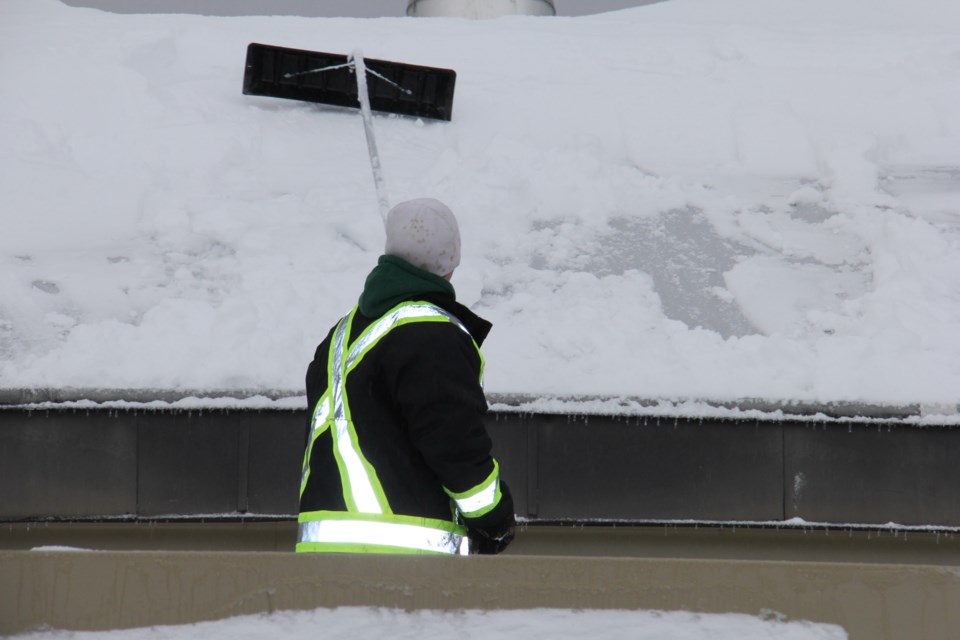 A worker use a snow rake to clear the roof of the West Ferris Arena. File photo by Jeff Turl.

North Bay City Council has approved a two-year contract to clear the roof over the West Ferris Arena's dressing rooms after snowfalls.

Council awarded the nearly $103,000 contract unanimously to lowest-bidder Canor Construction Inc. after a request-for-quote process. The City has the option to extend the contract for an additional year. The funds will come from the arena's operational budget.

Without the snow removal contract in place, "the City will be required to close this facility if this work is not undertaken and the City does not have the capacity to complete this work with internal forces," reads a staff report to council.

"The quote from Canor Construction Inc. was the lowest bid and provides the best overall value to the City. Their bid is considered fair and reasonable. The actual quantity and value of the work requested will vary based on operational requirements," according to the report.

A five-year review of the structural integrity of the facility was conducted in 2016 and resulted in an order for snow to be "removed from the change room roof when accumulation exceeds 600 mm. This requirement has been reaffirmed in a 2020 structural engineering report."

That same report acknowledges, "West Ferris Arena is approaching its end of life."

And: Ice users concerned over two arena closures within a week

The City of North Bay has expressed its goal is to keep West Ferris Arena as a viable option for user groups until a new complex is built. Therefore, the recommendation to award the roof snow removal contract came with little wiggle room.

The City says the Ministry of Labour has made site visits "on numerous occasions to verify that the City is monitoring snow accumulation on the facility and that snow accumulations exceeding 600 mm are being promptly removed."

See also: Construction of new arena could take up to three years to complete

"When it comes to reopening West Ferris Arena, there are no immediate plans. It could potentially open if there’s enough demand — we’re continuously monitoring usage and communicating with traditional user groups," says Communications Officer Gord Young. "We’re also working with other user groups such as ball hockey to determine if there would be interest in the facility without ice."

Councillor Chris Mayne, who chairs council's infrastructure and operations committee says having city employees perform the roof shovelling duties is not a viable option. He advises, during a snow event, it's all hands on deck for staff. Also, the work is performed at heights with specialized equipment and training by the contractor.

Earlier this week, after the new arena project was denied ICIP funding, Mayor Al McDonald expressed confidence that, with the "will of Council," the new community centre would move forward — even if it meant building without grants.

Memorial Gardens and its ice surface reopened in late summer to the public and one rink at Pete Palangio Arena is back in use, with the second to be made available within weeks. The City had been using the latter facility as an emergency homeless shelter as part of its response to the COVID-19 pandemic and the operation has since been moved to the former OPP property declared surplus, located off Chippewa Street West. All arenas closed in March due to the pandemic.