Police mum on cause of death in triple-murder/suicide 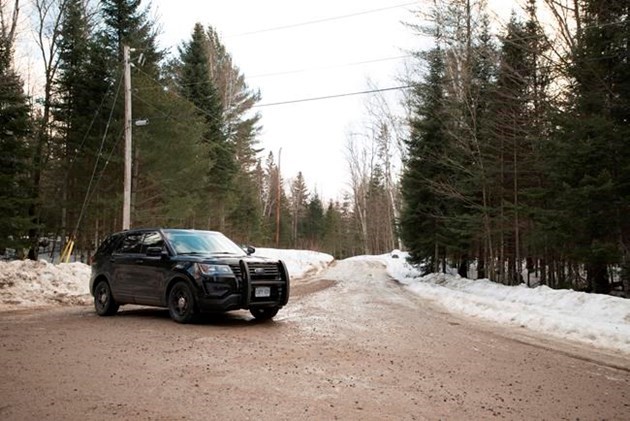 Police have blocked the road in Ryerson Township where the tragic triple murder took place,

RYERSON TOWNSHIP, Ont. — A man killed three members of the same family — two women and one man — at their central Ontario home before taking his own life, police said Sunday.

OPP said the incident, which is being investigated as a triple murder-suicide, took place in Ryerson Township, a rural community near Burk's Falls, about an hour's drive south of North Bay.

OPP Det. Insp. Martin Graham said a friend had stopped by the home for a prearranged visit Friday night around 7:30 p.m. and "came across this tragic scene" and called 911 immediately.

"The fourth deceased in the residence is not related by blood to the three victims of the homicide, but is also a resident of Ryerson Township," Graham said.

He added that the three family members all lived in the house where they were found dead.

On Sunday, police had blocked off access to the home as they continued their investigation.

The home sits at the end of a rural road in the isolated community of just under 650 people.

Graham, who's leading the investigation, said police found guns at the home, but wouldn't say whether any of the victims were shot, only that all four had signs of trauma.

He said he wasn't sure when the killings occurred.

"We're trying to narrow down the time that this incident took place," Graham said. "We know it took place sometime between Wednesday evening and up to 7:30 p.m. on Friday."

Police have not released the names of the dead. Graham said police won't be commenting on any potential cause of death until a post-mortem is complete, which might happen later this week.

The township's deputy reeve, Barbara Marlow, said she hadn't heard of a tragedy of this scale happening in the area during the 45 years she's lived there.

"It's just a small community, so everybody is quite shocked," she said.

Cathy Still, the mayor of the nearby village of Burk's Falls, where Ryerson's population does its socializing, said she too was surprised by the deaths.

"This is really strange. We've only had maybe four incidents in the last 60 years of anything involving shootings or guns, or anything like that."

Outside a Tim Hortons coffee shop in Burk's Falls, Ahren Simmons spoke about the tragedy.

"It's a very low crime area, it's frightening," Simmons said.

"Stuff does happen, but not often at all."

The last major incident he could remember was two years ago when a woman was killed during a robbery.