'Today I am asking local candidate Jordy Carr if she supports this type of 'dirty tricks' campaign, or if she unequivocally denounces Andrew Scheer'
Oct 20, 2019 10:31 AM By: Jeff Turl 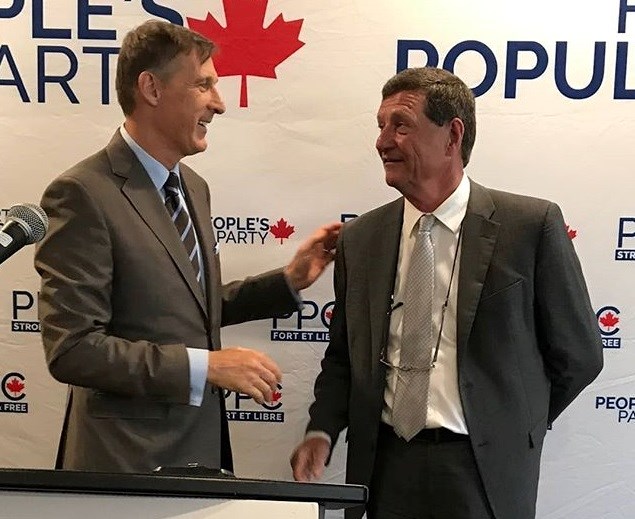 Reports by the Globe & Mail and CBC have linked the Conservative party to a co-ordinated effort to smear former caucus colleague Maxime Bernier and his People's Party of Canada.

They indicate a dirty tricks campaign involving the Conservative Party of Canada and former Liberal organizer Warren Kinsella, sought to discredit the People's Party of Canada to stop Bernier from participating in the Leaders Debates.

“This type of underhanded, undemocratic behavior is exactly why so many Canadians are fed up with politics as usual and the old-line parties” said Mark King, Peoples Party candidate for Nipissing-Timiskaming.

“This is a direct attack on our democratic process. Just like Trudeau, Andrew Scheer is ready to say and do anything to get power. He is ready to steal the election with lies and manipulations.”

The Globe and Mail reported that strategist Warren Kinsella and his firm Daisy Group were hired to "seek and destroy" Bernier's party and portray its supporters as racist.

Sheer is refusing to confirm, deny or even acknowledge the report.

King says “Not only does it appear the Conservative Party paid a conservative hack to attack the Peoples Party, they stopped their activities a day before Elections Canada rules would have required them to disclose their relationship.

“Today I am asking local candidate Jordy Carr if she supports this type of 'dirty tricks' campaign, or if she unequivocally denounces Andrew Scheer. Is this the kind of government we can expect from Andrew Scheer – underhanded and secretive?

“This is the same style of dishonorable tactics that were used earlier in this local election campaign by the Conservative establishment, which resulted in my nomination as a candidate for the Peoples Party. The voters of Nipissing-Timiskaming, in fact, the people of Canada, deserve much better. And believe me, people see through this.”