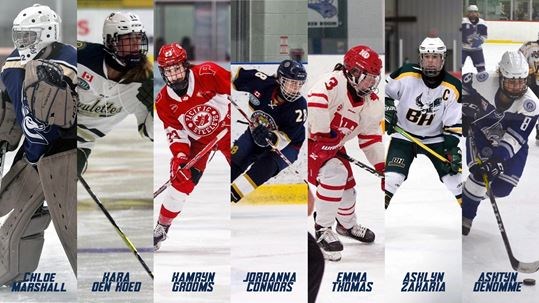 Darren Turcotte has not stopped working to help build the Nipissing Lakers varsity women's hockey team despite the fact he has not had a chance to get on the ice with his players in 2021.

The Lakers announced recently that they have added seven new recruits including some coming over with USport experience.

In total, Turcotte brings in one goalie, three defenders and three forwards.

"We are very excited to have these seven players join us in 2021," said the longtime Lakers coach and recruiter who has been with since the program's inception in 2013.

"We have added depth at every position with some very skilled players with great people skills. This is yet another recruiting class that will allow us to continue to grow into the program that we have been striving for."

In goal, the Lakers have added netminder Chloe Marshall who played previously for the University of Lethbridge Pronghorns women's team which folded in the summer of 2020.

The Neilburg, Saskatchewan product plans to take Psychology at Nipissing and describes herself as a goal who is aggressive, confident and quick.

The Fergus, Ontario native says she's a defender that thrives in the physical part of each and every ice time.

Jordanna Connors comes to the Lakers from the Central York Panthers U22 from the Provincial Women's Hockey League.

The defender, who hails from Scarborough, believes she is an aggressive playmaker who is strong defensively.

Kamryn Grooms comes from the West Coast and the Vancouver Island Seals of the FMAAA.

The defender from Ladysmith, B.C., believes she reads the game well and has solid offensive instincts from the blueline.

The North Bay resident is quick, smart and considers herself a quality playmaker.

The Illinois product is enrolled in Nursing and believes she is creative and strong positionally.

The third forward signed was Ashlyn Zaharia from the Balmoral Hall Blazers in Manitoba.

The Winnipeg resident can play centre and left wing.

Zaharia believes she has a strong hockey IQ and has a great shot.

Provincial cuts will have dire consequences for northern hospitals, unions predict
May 5, 2021 5:30 PM