'We campaigned on finding four cents for every provincial dollar spent and we are asking our partners to do the same'
May 26, 2019 11:01 AM By: Sudbury.com Staff 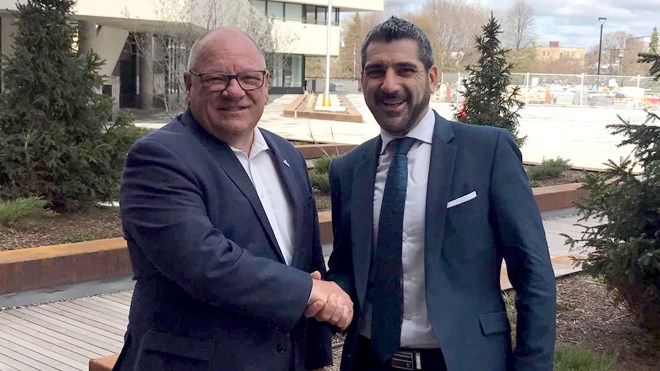 Sault Ste. Marie MPP Ross Romano was in Sudbury meeting with Mayor Brian Bigger to highlight the Tory government's effort to push line-by-line spending reviews of large municipalities and schoool boards to save four cents for every dollar spent. (Supplied)

Announced this week, Premier Doug Ford's government has set aside $7.35 million so large urban municipalities and school boards can conduct line-by-line reviews of spending, with an eye to saving four cents for every dollar spent.

Blaming the previous government for "15 years of Liberal mismanagement," Romano said the Tories campaigned on saving Ontario taxpayers four cents on the dollar, so they're asking municipalities and school boards to do the same.

"We campaigned on finding four cents for every provincial dollar spent and we are asking our partners to do the same," Romano said today.

The $7.35 million to fund line-by-line reviews aims, the Conservatives say, to identify "potential savings while maintaining vital front-line services." The money is coming through the Audit and Accountability Fund.

No word yet on whether the government will extend the scheme to smaller cities like North Bay.

In a news release, the government said, "In Ontario, over 90 per cent of provincial spending goes towards funding school boards, hospitals, municipalities and other outside organizations. By providing resources through the Audit and Accountability Fund, the government is empowering school boards and municipalities to work towards the shared goal of returning the province to fiscal balance while making sure vital programs and services are maintained."