From Midget AAA to the NCAA 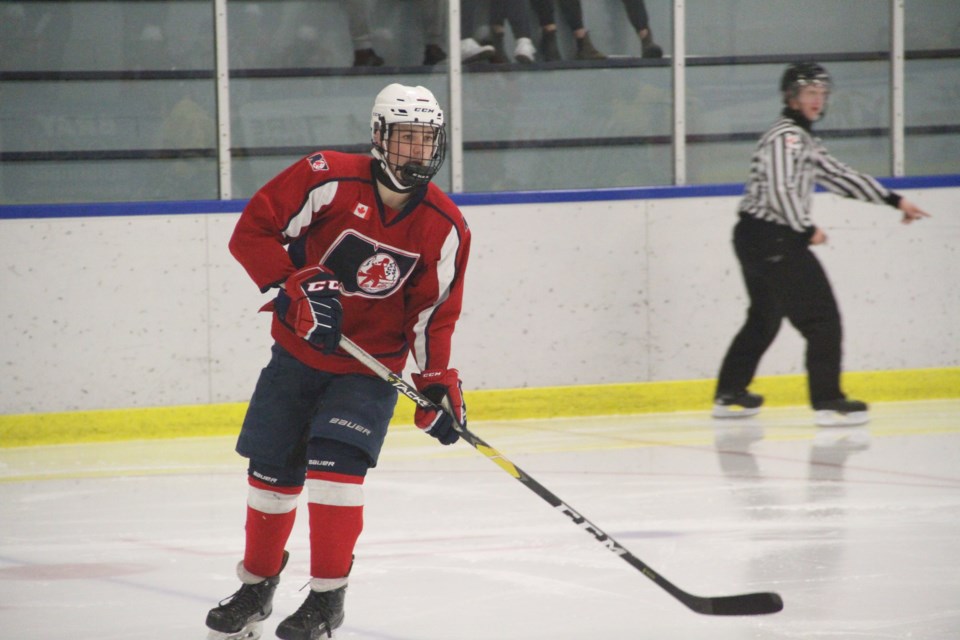 Trappers defenceman Ben Brunette in action this fall against the Kapuskasing Flyers. Photo by Chris Dawson/BayToday.ca.

Ben Brunette has had to deal with disappointment during his budding hockey career.

He was cut by his AAA team in peewee and went unselected in his OHL draft year in 2018.

But how things blossomed for the talented defenceman this season on the blueline with the North Bay Major Midget AAA Trappers.

Brunette had a breakout year for the Great North Midget League champions as he netted 17 goals along with 37 assists for 54 points in 36 regular season games with the Trappers this season.

That success created some hype around the 17-year-old this season and his success caught the attention of the University of Massachusetts-Lowell NCAA Division 1 hockey program.

“I am very grateful to have been offered a D1 commitment to UMASS Lowell,” said Brunette.

“It’s exciting to see that some of my hard work has paid off, and it will also help me stay focused and continue working to prepare for this next level.”

Brunette credits Jason Clarke, the coach and GM of the Carleton Place Canadians of the CCHL, for helping him get connected to the NCAA.

Brunette has committed to play junior A for the CCHL powerhouse squad in Carleton Place next season.  That’s the same team Colton Point joined out of midget and went on to play NCAA D 1 with Colgate and was selected by the Dallas Stars in the 5th round of the 2016 NHL Entry Draft.

“I owe thanks to Jason Clarke from the Carleton Place Canadians who promoted me to NCAA schools and has offered me a spot to continue to improve, and play Jr A next season,” said Brunette.

Ironically, only days after receiving the NCAA commitment, Brunette was selected in the second round of the Under-18 OHL draft by the Kingston Frontenacs.

Brunette is a team guy and he credits the success his team had, winning three tournaments, going unbeaten in the Great North Midget League, and finishing second at the recent Central Regional playdowns as a key reason why he has been recognized.

“I would like to thank my teammates for this unforgettable season,” said Brunette.

“I’d also like to thank my past and present coaches who put a lot of time and effort in each year to make me a better player and to help achieve our team goals. Another big thanks goes to the Powassan Voodoos organization and coaching staff who were very welcoming and offered me a chance to play with them as an affiliate player this year,” added Brunette who also played handful affiliate games with the NOJHL team this season.

He believes those junior ‘A’ games gave him additional confidence that was recognized by the NCAA coaches at Lowell.

“I believe these games gave me an opportunity to see what hockey at the next level was like, and showed me what I needed to work on as a player to be able to play at this level,” he said.

“Also, the recruiters said they spent time reviewing my games from Powassan, so playing as an affiliate player at the Jr A level last year helped me to achieve a NCAA scholarship.”

Brunette is hoping to play at least one season of junior ‘A’ hockey before making the jump as a potential true freshman to UMass-Lowell.

He also sends thanks for the family support he has had from his parents and his younger brothers through his hockey journey.

Brunette does have this advice for hockey players when dealing with disappointment.

“My advice is to just keep working hard and having fun,” he said.

“Use it as motivation and try to improve each year to become the best player you can.”