JAKARTA, Indonesia — Workers in Indonesia marked international labour day on Saturday with significantly less-attended marches due to coronavirus restrictions, but thousands still vented their anger at a new law they say harms their rights and welfar
May 1, 2021 6:33 AM By: Canadian Press 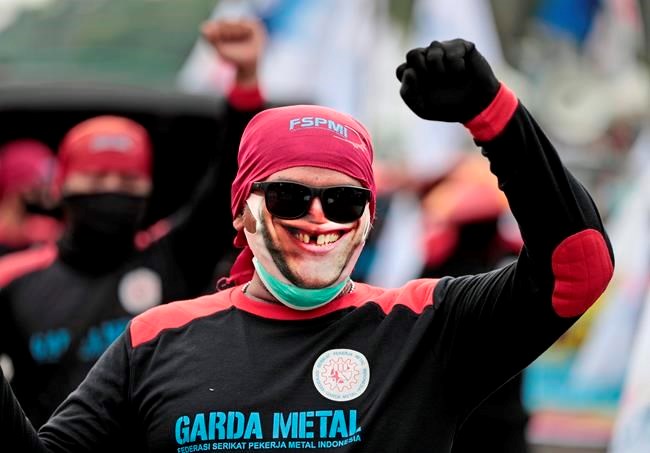 JAKARTA, Indonesia — Workers in Indonesia marked international day on Saturday with significantly less-attended marches due to coronavirus restrictions, but thousands still vented their anger at a new law they say harms their rights and welfare.

About 50,000 workers from 3,000 companies and factories were expected to take part in traditional May Day marches in 200 cities and districts in Southeast Asia's largest economy, said Said Iqbal, the president of the Confederation of Indonesian Trade Unions. However, most rallies are held outside factories or company compounds with strict health protocols, Iqbal said.

Elsewhere in the region, police in the Philippine capital of Manila prevented hundreds of workers belonging to left-wing groups from holding a May Day rally at a public plaza, said protest leader Renato Reyes. A monthlong coronavirus lockdown there has been extended by two weeks amid an alarming surge.

In Taipei City in Taiwan, hundreds of protesters marched in the streets to ask for better salaries and more secure pensions. Most protesters wore face masks to protect themselves from the virus.

In Indonesia's capital of Jakarta, the epicenter of the national epidemic, authorities have warned groups to adhere to social distancing and other health measures, which would significantly reduce crowds, said Jakarta Police spokesperson Yusri Yunus. He added that more than 6,300 police personnel were deployed to secure the capital.

Enraged over the new Job Creation Law, several hundred workers gathered near the national monument, waving colorful flags of groups and banners with demands. Others laid tomb effigies on the street to symbolize their hopeless and uncertain future under the new law.

“The Job Creation Law has incredibly buried our hope of a better future,” said Riden Hatam Aziz, one of the organizers. They later marched to the Court and near the presidential palace compound to demand the repeal of the legislation.

The demonstrators say the law will hurt workers by reducing severance pay, removing restrictions on manual by foreign workers, increasing the use of outsourcing, and converting monthly salaries to hourly wages.

President Joko Widodo signed the law in November despite days of protests in many Indonesian cities that turned violent weeks earlier. The act amended 77 previous laws and was intended to improve bureaucratic efficiency as part of efforts by Widodo’s administration to attract more investment.

The Confederation of Indonesian Trade Unions and dozens of other organizations have filed a legal challenge against the Job Creation Law with the Court.

“The difficult situation could lead to more strikes and protests this year,” Iqbal, the president of the trade unon group, said.

Television reports showed hundreds of workers rallying in several other cities, including Makassar. They shouted demands for a raise in minimum wage and relaxed outsourcing rules.

“Workers were largely left to fend for themselves while being locked down,” leader Josua Mata said. When workers protest the government’s mishandling of the pandemic that led to a massive loss of jobs and income, authorities suppress their basic right, Mata said.

Secretary Silvestre Bello III separately led a ceremony in Manila, where about 5,000 workers got their jabs for COVID-19.

In Taiwan, conditions and welfare for food deliverymen have become a major issue this year, as the companies they represent are not covering their pensions, nor guaranteeing any minimum salary for them.

A food delivery driver present at Saturday's protest said the pay per delivery had been cut several times, with some platforms even offering fluctuating rates, making it hard to make money. One supermarket employee said she had not seen a pay raise for several consecutive years, even though sales have been growing.

The protest lasted about two hours and led the marchers to the parliament.