LONDON — Britain’s Parliament is going back to work, and the political authorities have a message for lawmakers: Stay away. U.K.
Apr 21, 2020 8:56 AM By: Canadian Press 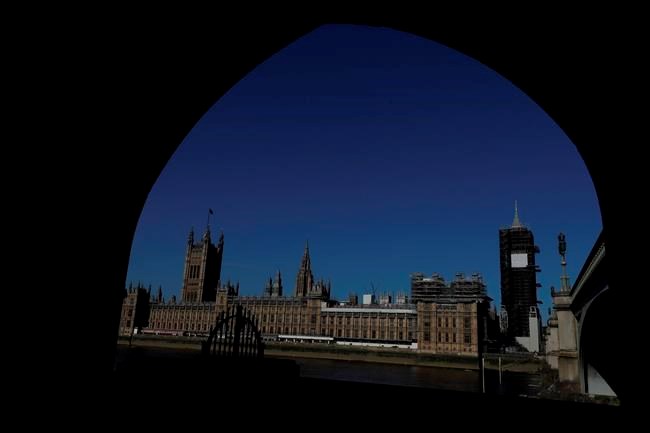 LONDON — Britain’s Parliament is going back to work, and the political authorities have a message for lawmakers: Stay away.

U.K. legislators and most parliamentary staff were sent home in late March as part of a nationwide lockdown to slow the spread of the new coronavirus. With more than 16,500 virus-deaths in Britain and criticism growing of the government’s response to the pandemic, legislators are returning Tuesday — at least virtually — to grapple with the crisis.

House of Commons Speaker Lindsay Hoyle plans to preside over an almost-empty chamber, with space being made for a maximum of 50 of the 650 members of Parliament. Other lawmakers will be able to ask questions from home using videoconferencing program Zoom, beamed onto screens erected around the wood-paneled Commons chamber.

Hoyle acknowledged “there are bound to be bumps along the way” as the tradition-steeped 700-year-old institution takes a leap into the unknown. But he urged lawmakers not to travel to Parliament.

“I do not want members and House staff putting themselves at risk,” Hoyle said.

A small number of legislators will meet in person Tuesday to approve the new digital arrangements. Taped spaces will keep them 2 (6.5 feet) apart.

The virtual Parliament will have its first big test Wednesday during the weekly Prime Minister’s Questions session. Foreign Secretary Dominic Raab will stand in for Prime Minister Boris Johnson, who is still recovering from a bout of COVID-19.

Dozens of British lawmakers, advisers, civil servants and journalists have had coronavirus symptoms, likely contracted in the cramped precincts of Parliament and other government buildings.

Johnson spent a week in the hospital, including three nights in intensive care, after contracting the virus. The 55-year-old leader is recuperating in the countryside, and there is no word on when he will be healthy enough to return.

Opposition politicians have been largely supportive of the national lockdown that was imposed on March 23 and runs until at least May 7. But political unity has frayed as Britain's coronavirus death toll mounts. Official statistics released Tuesday show that at least 1,500 more people with the new coronavirus have died in Britain than the 16,500 whose deaths have been announced by the government.

Opponents are attacking Johnson's Conservative government over a lack of testing for the virus, shortages of protective equipment for medical workers and an elusive strategy for ending the lockdown.

The government says it is too soon to consider easing the restrictions. But it acknowledges that widespread testing — so that infected people can be identified and their contacts traced and isolated — will play a key part. The number of tests being performed has grown from 5,000 to near 20,000 a day — still a long way off the government’s promise of hitting 100,000 a day by April 30.

Britain is not the only country grappling with how to conduct politics during the pandemic. Legislatures in France and Italy are working on a reduced schedule, while lawmakers continue to meet in Germany and Poland with social distancing measures. The U.S. Congress has postponed its return until May, while Canadian lawmakers have agreed to a mix of digital and in-person sittings starting next week.

It's unclear how fully British lawmakers will be able to scrutinize the government under the new digital arrangements. Approving legislation is on hold because there's no way yet for lawmakers to vote. In the House of Commons, that's done by the time-, time-consuming method of having legislators traipse out of the Commons and walk through “yes” or “no” lobbies.

Hoyle said authorities are “urgently” seeking a way that voting can be done remotely.

The pandemic has already upended everyday activity in the cramped, crumbling parliamentary complex, where several thousand people work, served by bars and restaurants, a post office and even a hairdresser. Even before parliamentarians were sent home March 25, Hoyle had suspended alcohol sales on the premises, to encourage staff not to linger.

The virtual arrangements are likely to curb Parliament's spontaneity and subdue its often raucous atmosphere. Jacob Rees-Mogg, the Conservative lawmaker who serves as leader of the House of Commons, accepted that “the new digital Parliament will not be perfect.” But he said “we must not let the perfect be the enemy of the good.”

And, he added, things have been worse.

“In 1349, the Black Death forced Parliament not to sit,” Rees-Mogg wrote. “Today, we can do better thanks to technology, Mr. Speaker and a determination to keep our democracy going.”

Meg Russell, director of the Constitution Unit at University College London, said the new arrangements were “unique and unprecedented.” But she said politics would be more difficult without “face-to-face and informal contact.”

“Politics is a lot more consultative than people think,” she said. “Informal conversations and things which go on out of the public eye are really crucial to the way that Parliament runs."