TULSA, Okla. (AP) — The commission formed to observe the 100th anniversary of the Tulsa Race Massacre announced Friday that it had booted Oklahoma Gov.
May 14, 2021 6:23 PM By: Canadian Press 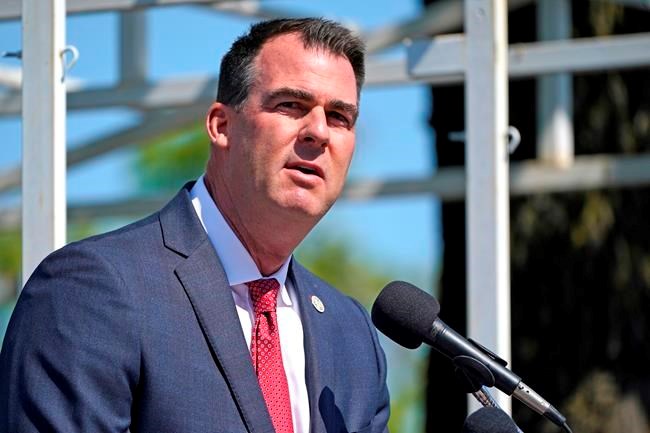 TULSA, Okla. (AP) — The commission formed to observe the 100th anniversary of the Tulsa Race Massacre announced Friday that it had booted Oklahoma Gov. Kevin Stitt from his seat on the panel a week after he signed a bill outlawing the teaching of some race and racism concepts in public schools.

A statement from the commission did not indicate the reason for the parting, and a spokeswoman said the commission had no further comment. However, commission project manager Phil Armstrong this week had sharply criticized the Republican governor for signing a bill into law that prohibits the teaching of so-called critical race theory in Oklahoma schools.

It went on to say that while the commission “is disheartened to part ways with Governor Stitt, we are thankful for the things accomplished together.” It also said, “No elected officials, nor representatives of elected officials, were involved in this decision.”

The Republican governor was informed of his ouster only when the commission issued its statement, said Stitt spokeswoman Carly Atchison.

Stitt’s role “has been purely ceremonial and he had not been invited to attend a meeting until this week,” her statement said.

The commission was formed to organize events for the anniversary of the massacre that occurred May 31 and June 1 in 1921. A white mob killed an estimated 300 people and wounded 800 while burning 30 blocks of Black-owned businesses and homes and neighborhood churches in Tulsa's Greenwood neighborhood, also known as “Black Wall Street.” Planes were even used to drop explosives on the area, burning it to the ground.

In a letter to the governor Tuesday, Armstrong said the commission was “gravely disappointed” that neither Stitt nor a representative chose to attend a meeting Monday night to discuss the signing of the GOP-backed legislation on "critical race theory,” which examines systemic racism and how race influences U.S. politics, legal systems and society. Among the concepts that are prohibited are that individuals, by virtue of race or gender, are inherently racist, sexist or oppressive, whether consciously or unconsciously.

Armstrong had said Stitt’s signing of the bill on May 7 was “diametrically opposite to the mission of the Centennial Commission and reflects your desire to end your affiliation.”

Atchison decried the commission's move in her statement Friday.

“It is disappointing to see an organization of such importance spend so much effort to sow division based on falsehoods and political rhetoric two weeks before the centennial and a month before the commission is scheduled to sunset," her statement said.

Another member of the commission, state Rep. Monroe Nichols of Tulsa, resigned from the panel Tuesday over Stitt’s signing of the bill, saying it “cast an ugly shadow on the phenomenal work done over the last five years.”

The commission has developed and promoted programs, events and activities to remember the 1921 massacre and memorialize its victims. Among the events are “Greenwood: An American Dream Destroyed,” a presentation that wraps a monthlong run this weekend, and “Greenwood Rising: The Black Wall Street History Center," which is scheduled to be unveiled June 2.