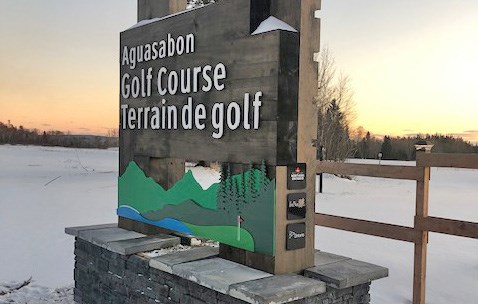 Despite all the GPS technology available to travellers, there’s nothing like wayfinding signage to assure you of your destination. Or that you’re heading in the correct direction. It can also provide a sense of security. And for residents, signage can instill a sense of pride in the community and sometimes even raise their awareness as to the amenities within their own community.

The Northern Ontario Wayfinding Strategy was commissioned by Destination Northern Ontario (DNO) in 2014. The strategy recommended starting with two pilot projects – one in a large community and one in a small community. These two pilots – Thunder Bay and Wawa – would be instrumental in developing a wayfinding toolkit for future communities to use in planning and designing their signage programs.

A three-year partnership, between DNO and FedNor was launched in 2017 and tasked with the goals to:

“This Wayfinding Strategy identified that signage was urgent and that even despite technology, people are still looking to connect with the person behind the counter at the local travel info centre or local attraction,” says Pat Forrest, Senior Coordinator, Partnerships & Initiatives, DNO. “Signage bridges that lack of connectivity.”

Attractive and informative signage can also make tourists aware that ‘something significant’ is in a particular community.

The decision to offer bilingual signage was a requirement of the FedNor aspect of the program and some communities even embraced a third or fourth language to ensure inclusive representation of community members.

“Seeing other languages on the sign makes you want to go further and learn more about the culture of the area,” says Pat.

Although a toolkit provided recommendations that would assist with consistency in messaging and important design elements, every participating community found a way to put their own stamp on it.

“We did have a toolkit and we asked the designer and the community to consider using the font and the colours suggested in the kit,” explains Pat. “It took a fair bit of co-ordinating but the unique personality of every community still shines through.”

Almost all participating communities were able to use the sign design and installation services of a Northern business. Maintenance and upkeep of the signage will become a responsibility of the municipality.

For Blind River, there was no doubt that the sign would be trilingual – English, French and Ojibwe. Visitors driving into the town are met with “welcome”, “bonjour” and “anii”. Leaving the town, visitors are bid farewell with “thank you”, “merci” and “meegwetch.”

“We wanted to reflect our strong sense of cultural identity while welcoming visitors and thanking them for experiencing our community,” says Karen  Bittner, Director of Facilities & Community Services, Blind River. “Everybody matters who is going through our community.”

The Ojibwe greeting was to show the community’s strong indigenous history and partnership with the First Nation community, located directly west of the town of Blind River.

“We really value and respect the teamwork we have with the Mississaugi First Nation, “says Karen.

It also ensures that not only local residents are effectively navigating their community but even potential future residents.

“We want to attract and retain retirees who are looking to retire in the north and these signs are a way of showing them that they’re not missing out by relocating here,” she explains. Signage shows that the community is a host to trails for skiing, hiking and cycling, a marina, art gallery, library, museum, shopping, an arena, parks, beaches, theatre and places of worship.

“Without the signs you may just pass through but instead you’re now dazzled by all these attributes that this small, but dynamic, community is hosting,” she says.

Karen says that ensuring consistency in signage has been important for both the boating traffic utilizing the marina and the highway traffic.

“Our marina traffic can now easily find what they’re looking for and see that it is a place they may want to stay and visit,” she says. Consistency is also important, for any visitors, because when they return, in the future or share their Blind River experience, the sign attributes will still be there.

“We are grateful for the partnership with DNO and FedNor for focusing on our northern communities,” she says. “Blind River is a valuable community and we have much to offer.”

For Kenora, the Wayfinding program was the third phase of a downtown revitalization project that started in 2017. They had already installed ten directional and wayfinding signs plus two kiosks (signs with more detailed information). This final phase saw the installation of two gateway signs positioned near the Harbourtown Centre and downtown.

These two gateway signs are distinctly different from the other wayfinding signage, says Megan Dokuchie, Economic Development Officer, City of Kenora, because they reflect the First Nations who have inhabited the area for thousands of years. Located at 2nd Street (near Park Street) and also at the roundabout, the two signs are intended to let the visitor know they have ‘arrived.’

The Ojibwe language greeting, which is translated to ‘Glad you are here’,  is prioritized and then translated, as close as possible to English, French and Michif. One sign consists of three aluminum mesh banners that appear to be pushed by the wind and sail-like in appearance. The Roundabout Gateway sign has the same multi-lingual greeting and is positioned between two rows of granite in the actual roundabout and includes plants native to the area.

“The signs are reflective of our local community,” says Megan. “There was already a mandatory bilingual component so our French was already included but we looked at Michi because it is a greeting that would be representative of the Metis population, as well.”

Wayfinding improves the visitor experience, she adds, noting that she’s looking forward to seeing a reflection of our visitors’ visits and comments on the wayfinding signs, in Kenora’s tourism department’s stats.

“The City of Kenora recognizes the support received from Destination Northern Ontario through the Bilingual Community Wayfinding Partnership”, says Megan. “The designs included four languages: English, French, Ojibwe and Michif and translations and appropriate greetings were developed in partnership with a member of Common Ground from Niisaachewan Anishinaabe Nation and a member of the Kenora Metis Council.”

All participating communities will continue with future sign maintenance through either their public works or parks and recreation divisions. Almost all participants obtained design and planning services through Ontario companies, many from Northern Ontario.

Destination Northern Ontario is funded by the Ontario Ministry of Heritage, Sport, Tourism and Culture Industries. It is the largest of Ontario’s 13 Regional Tourism Organizations Their mandate is to coordinate, align and invest in sub-regional programs and serve as the lead in pan-northern management functions.

The future of our workplaces? Hiring and managing staff during a pandemic
Dec 21, 2020 9:58 AM