Miss seeing live music and going to concerts? An exciting new music series is about to begin and you won’t want to miss a single show.

GFL Memorial Gardens is hosting the Mocha Shriners Concert Series from September 19th to the 23rd. The series brings a range of top musical acts to the Soo; each one is supremely talented, has a devoted following and is known for being one of best in their genre.

There’s truly something for everyone here, with music that caters to all tastes and ages. Best of all, tickets are on sale now with 25% off remaining seats using promo code: SHRINERS!

Walk Off the Earth with guests MONOWHALES

Indie pop and alternative rock band from Burlington, Ontario Walk Off the Earth is known for their cover songs. Members play multiple instruments, have fun reimagining existing songs and create their own amazing original compositions. The group has toured all over the world and won four Canadian Radio Music Awards. They’ve drawn tons of attention on social media—be sure to check out their cover of Gotye’s “Somebody That I Used To Know”. While they started out on YouTube and attracted lots of fans online, they’re a verified hit in real life too!

The MONOWHALES are a Juno-award winning alternative rock band from Toronto. The group debuted in 2017 and released their first album, Daytona Bleach, in March of 2021. The trio won Breakthrough Group of the Year at the 2022 Juno Awards.

Kim Mitchell and 54-40 with special guests

Veteran rocker Kim Mitchell has been making music and performing since the mid-70s. Mitchell was inducted into the Canadian Songwriters Hall of Fame in 2021 and he has sold over 1.5 million records in Canada. At the age of 70, he is showing no signs of slowing down: he is still a super-talented guitarist, singer and songwriter. For over 11 years he was also a popular afternoon drive DJ on Toronto’s Q107 radio station! Come hear your favourite classic rock anthems from his 50-year career.

54-40 is a Canadian alternative rock band that hails from Tsawwassen, British Columbia, a suburb of Vancouver. To date, they’ve put out 14 albums—four platinum, two gold—and earned eight Juno nominations. The band has been inducted into the BC Entertainment Hall of Fame and the Canadian Music Industry Hall of Fame.

Marianas Trench and The Trews with special guests

Pop rock band Marianas Trench, from Vancouver, British Columbia, will be fresh off a tour of Australia when they play in the Soo. The band has been making music for over 20 years and continues to thrill audiences with their mix of pop punk, pop rock and symphonic rock music. They’ve won numerous industry awards, including a MuchMusic Video Award, a Canadian Radio Music Award and a Juno!

Four-piece rock band The Trews are from Antigonish, Nova Scotia but are currently based in Hamilton, Ontario. They’ve put out seven studio albums since they first formed in 1997 and have won many accolades, including several East Coast Music Awards and two Independent Music Awards.

Legendary Canadian musician, singer and songwriter Burton Cummings brings his magical voice and memorable songbook to GFL Memorial Gardens. The former lead singer of The Guess Who and long-time solo performer is sure to impress with his many hits that stand the test of time—iconic songs like “American Woman”, “These Eyes”, “Stand Tall” and “Lay It On the Line”. Cummings has been performing since the mid-60s and this piano man hasn’t lost a bit of his charm or talent.

Don’t miss this chance to see so many great musical acts right here at home. Tickets are on sale now. To purchase, go to gflgardens.ca/concerts, visit the GFL Memorial Gardens box office or call 705-759-5251.

Get 25% off of the price of remaining seats using the promo code: SHRINERS!

Valid from September 12 at 10am to September 14 at 11:59 pm on all regular priced tickets. Click on the image below or visit gflgardens.ca/passwords to claim your discount! 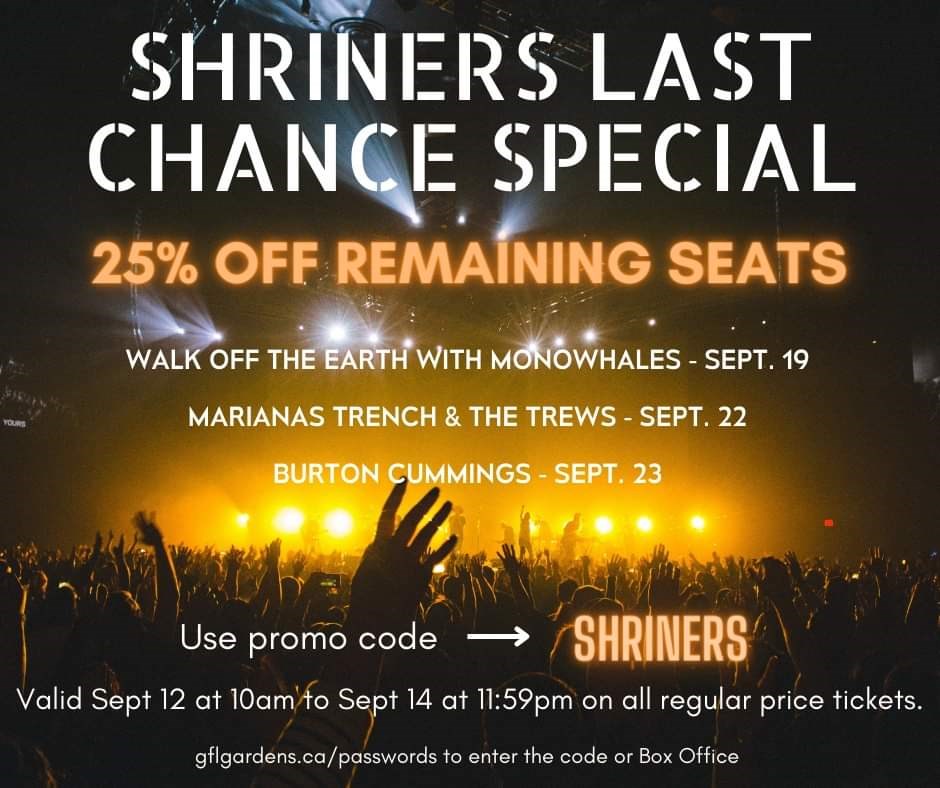