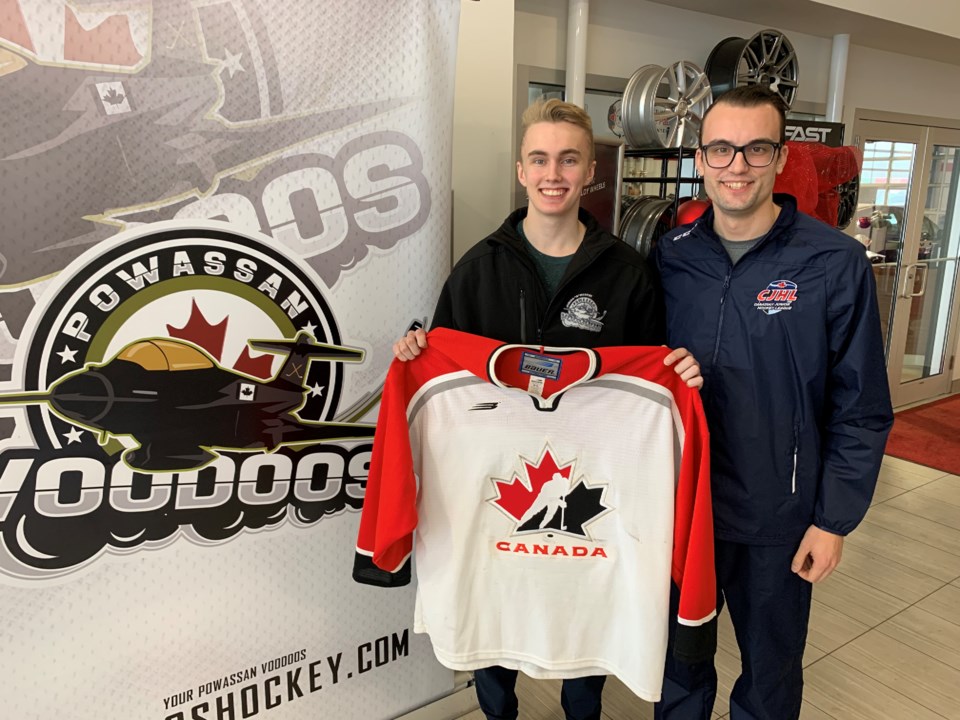 Voodoos goaltender Owen Say and trainer JJ Johnson will be going to the World Junior A Challenge with Team Canada East in early December. Photo by Chris Dawson/BayToday.
Powassan Voodoos goaltender Owen Say has been selected to play for Team Canada East at the World Junior A Challenge which takes place in Dawson Creek, B.C. from December 7 to 15. The club made the announcement in conjunction with the Hockey Canada roster announcement earlier today.

Say, will be joined by Voodoos head trainer JJ Johnson who was named to the Team Canada East training staff back in the summer.

Say has put up impressive numbers with the Voodoos sporting a 16-1 record along with a 2.14 goals-against average and a stingy 0.929 save percentage.

The 18-year-old London native joined the Voodoos this fall after spending last season with the Komoka Kings of the GOJHL.  Say also attended the Niagara IceDogs OHL main camp this summer.

"It’s a fantastic opportunity for me moving forward in my hockey career, but besides that, it’s something you dream of as a kid growing up, putting on the leaf to represent your country, it’s an honour," said Say during a media event at Northern Honda in North Bay.

"It’s without a doubt something I’ll cherish and remember for the rest of my life. I just have to say thank you to the Powassan Voodoos organization for what they have done for me so far this year and to my family for all the sacrifices they’ve made to get me to this point in my career."

The tournament includes two Canadian teams - East and West along with international squads from the United States, Russia and the Czech Republic.

"We are all very proud of Owen on being named to Team Canada East," said Voodoos head coach Max Gavin.

"He is a true pro on and off the ice and has been a big part of our success so far this year. He is truly deserving of this opportunity and we know he will represent his country with pride”

It's the second straight year that a Voodoos netminder will serve for Team Canada at an international event.  Last year goalie Joe Vrbetic, now with the North Bay Battalion, played for Team Canada Black at the World Under-17 Hockey Challenge last fall in New Brunswick.

The last local NOJHL player to compete for Team Canada East at this event was defenceman Sacha Guimond with the North Bay Jr. Trappers back in the fall of 2009.

Hunter heading to the Super Bowl
Jan 20, 2020 9:00 AM
Comments
We welcome your feedback and encourage you to share your thoughts on this story. We ask that you be respectful of others and their points of view, refrain from personal attacks and stay on topic. To learn about our commenting policies and how we moderate, please read our Community Guidelines.