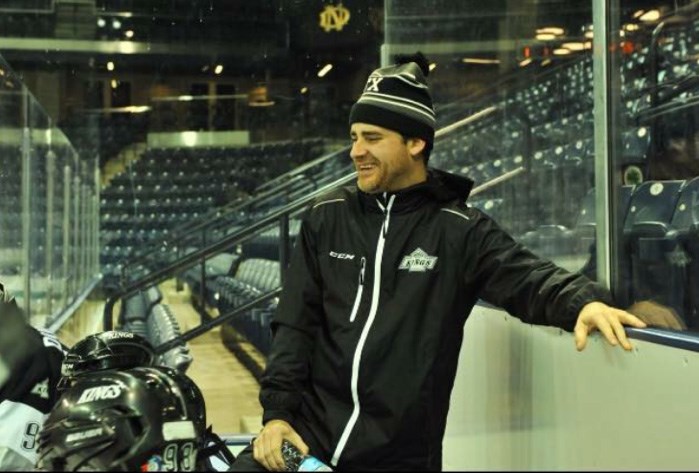 Beau Moyer on the bench with the Vaughan Kings of the GTHL. Photo courtesy GTHL.

The Powassan Voodoos reached to the Greater Toronto area and plucked a familiar face with heavy North Bay ties as Beau Moyer will return to the area to coach the Voodoos for the 2017-18 season.

"It's going to be a great challenge coaching the Voodoos,” said the 36-year-old North Bay native.

“I have been looking for the opportunity to coach at the junior level for past three years and coming home makes it that much more special. I'm hoping to add to a program that has a great foundation through all the hard work that Scott Wray and Chris Dawson have done the past three years. It is a challenge I am extremely excited about.”

Voodoos GM Chris Dawson is very familiar with Moyer, and he believes the North Bay native will make a smooth transition to the NOJHL.

“You can never argue about Beau’s passion for the game,” noted Dawson.

“He’s got a reputation for developing players and that’s what we do here in Powassan. I think many members of our staff, ownership and even the players already are excited to get going with Beau behind the bench.”

He also spent two seasons behind the bench with the North Bay Midget AAA Trappers from 2007 to 2009 and has been a scout with the Kingston Frontenacs since 2011.

Moyer is giving up his scouting job because of his move to the North Bay Battalion NOJHL affiliate team.

Moyer has some great support in the GTA from NHL legends like Doug Gilmour, who hired him with the Fronts, along with former NHLer and current Hamilton Bulldogs General Manager Steve Staios.

The most impactful thing about Beau’s coaching is that all the players that he coaches develop and gets better as the season goes on and that’s a real testament to a good coach,” said Staios, whose son played for Moyer.

“Plenty of coaches in the GTHL coach a safe way, but it takes a lot for a coach to step up and be able to coach and develop players, let them learn from their mistakes early on and he’s able to coach and allow the players to make plays and guide them along the way.”

Moyer also has a very good track record as a player.  Drafted in the late rounds of the 1998 OHL Priority Selection by the North Bay Centennials, Moyer played in the Ontario Junior ‘A’ Hockey League with the Couchiching Terriers and then went on to win a NCAA Division III championship with the University of Wisconsin-Superior Yellow Jackets in 2002.

The Voodoos will be holding an event next week to introduce Moyer to the Voodoos fans and the media on June 22nd.  Time and location still to be determined.