Greg Randall (middle) was presented his 2013 OVAtion award on December 14, 2013 during the U17 Challenge Cup in North Bay. 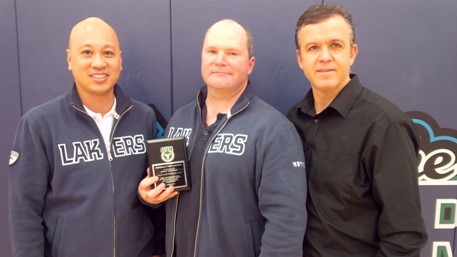 Greg Randall (middle) was presented his 2013 OVAtion award on December 14, 2013 during the U17 Challenge Cup in North Bay.
Celebrating Volleyball for Life in Ontario, the OVA holds a bi-annual OVAtions Award banquet to honour those volunteers and corporate partners that have distinguished themselves through the years by providing their time, effort and support to the promotion and development of volleyball in the province.
The banquet took place on Saturday, December 7th.  One of this years recipients of the 2013 OVAtion Award Winners is Greg Randall of NBYVC Lakers (North Bay Youth Volleyball)

Greg’s absolute focus over the past five years has been to communicate to the North Bay community that player development is the mission of The North Bay Youth Volleyball Club.  This simple philosophy has been a foundational element ensuring the growth of the club from an initial four teams to seven.  And more importantly, this focus has been the idea upon which all of his decisions as President have been based when selecting appropriate coaches, communicating with parents and the media and while facilitating Executive Council meetings.

Greg has also lead the club by changing the name of the club to LAKERS and linking it with Nipissing University’s Men’s and Women’s Volleyball Teams.  The Nipissing LAKERS Volleyball players – both male and female - have supported the club by hosting clinics in their new athletic facilities. Because of this partnership, Greg has managed to grow the club’s ability to host events and showcase Nipissing facilities.  The club has hosted a resounding four tournaments at Nipissing University in the past.  In addition, Greg has introduced three-ball to schools in all school Boards in the North Bay area as a way to promote the club.

The North Bay Youth Volleyball Club is an entirely volunteer organization and Greg continues to grow interest in the club by welcoming new parents to the club by opening up his home for meetings, celebrations for adults, coaches and athletes.  There is no greater ambassador for the sport of volleyball in North Bay, as Greg takes great pride in seeing all athletes achieve their personal best in the sport he loves.
"I am honoured to receive this award from the OVA. And I would like to extend a huge thank you to everyone who has dedicated their time to the club," said Randall in a press release.
"An organization is really only as strong as it's volunteers. This award is recognition of all the time and energy expended by the executive, coaches, and parent volunteers. I would also like to thank Nipissing Athletics, especially the coaching staff of the women's and men's Lakers teams for their support.  Our partnership with Nipissing has made our club that much stronger."