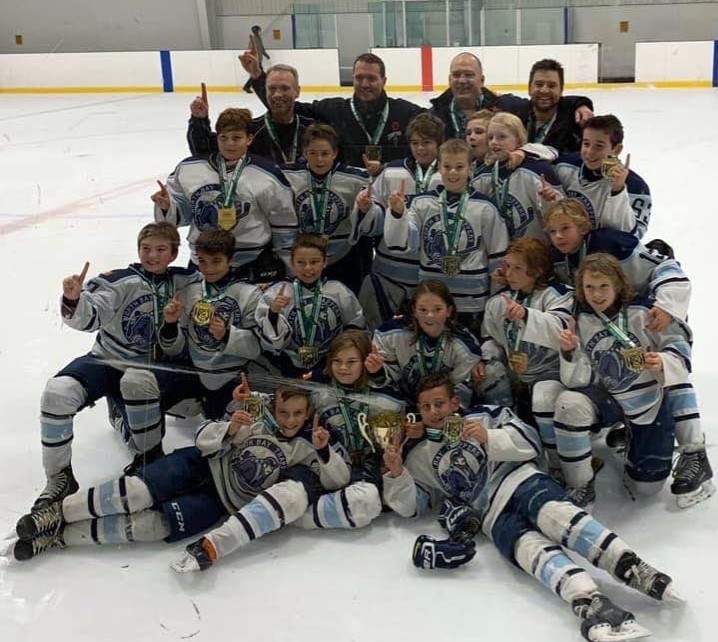 The Atom Major AA Trappers continue to see success as well as represent their city and the North Bay Minor Hockey Association with great pride!  Their latest championship win was at the London Green and White AA Tournament which took place in London, Ontario this past weekend. Friday started off slow with their first loss of the season against the Streetsville Tigers, a final score of 3-1.

However, they made up for that loss in the second match of the day against the Lasalle Sabres winning 8-0.

On Saturday the group faced the Vaughan Panthers where they won 4-0.

Next up were the London Jr Knights (Green) which the Trappers outscored with a 9-1 outcome.

The Atom AA Trappers showed their speed, skill and effort the quarter-finals on Sunday morning facing the Rochester Rattlers and winning 3-0. The semi-finals matched them up against the North York Knights, who are ranked second in the province. This game was a nail bitter and went into overtime, the Trappers came out on top with a 4-3 win.

This meant they were off to the finals, their seventh game in three days where they faced the Riverside Rangers.

Digging deep the boys showed up, gave their 100% effort to dominate the game and wrap up the tournament with a 5-3 victory.

These young athletes are off to a great start this season and definitely earning their number one ranking in the province.

Voodoos ink another local forward
Aug 6, 2020 5:00 PM
Comments
We welcome your feedback and encourage you to share your thoughts. We ask that you be respectful of others and their points of view, refrain from personal attacks and stay on topic. To learn about our commenting policies and how we moderate, please read our Community Guidelines.