Lakers secure comeback and finish off Gaels in OT 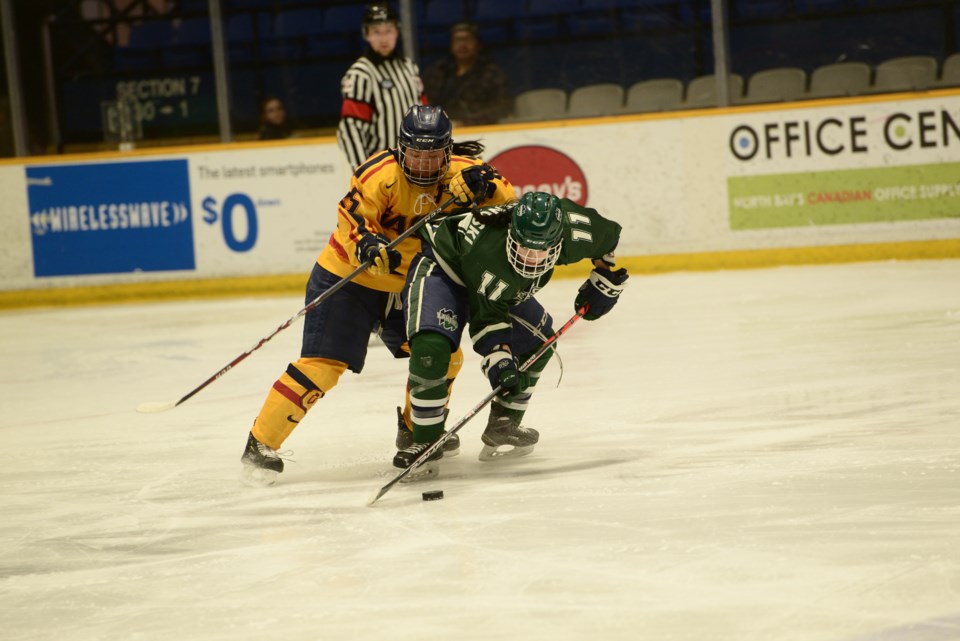 Photo courtesy Brian Doherty
The Nipissing Lakers women's hockey team was hoping to make short work of the Queens Gaels in Round 1 of the OUA McCaw Cup playoffs.
But on this night it was not easy.

After a dominating 4-1 Game one win, the Lakers were looking for the sweep Friday night on home ice and made no mistake, advancing to Round 2 thanks to a 3-2 overtime victory.

On their second power play opportunity, the Lakers made it 1-0 thanks to Brianna Gaffney, who redirected a pass into the back of the net.

Gaffney's second goal of the post-season was assisted by Teagan Feltz and Stacey Henshaw.

Despite being an exciting period and both teams having chances, there was no scoring to report in the middle frame.

Shots still favoured Nipissing through 40, as they led 17-16 in that department.

With the Lakers up, the Gaels struck twice before the midway mark of the third period.

First, they tied it the game at the 13:33 mark and took the lead just three minutes later.

Both goals barely crossed the goal line, but it was just enough to give the Gaels the advantage,

With time winding down and the Lakers down a goal, veteran defender Katelyn Heppner picked up the puck and went upstairs through traffic to tie the game.

The goal, assisted by Brianna Gaffney, came with 1:19 left in regulation.

Thanks to Heppner's heroics, the teams headed to overtime in the second game of the series.

The shots favoured Nipissing 32-23 through 60 minutes.

Chances at both ends didn't result in anything until the final three minutes.

Maggie McKee ripped slap shot from the slot on the power play to send the Lakers to the second round.

The Lakers will await their second-round opponent which will be determined this weekend as Round one wraps up.
--