Deverick Ottereyes and Gael Lubwele with two goals each
Nov 21, 2019 5:31 AM By: BayToday Staff 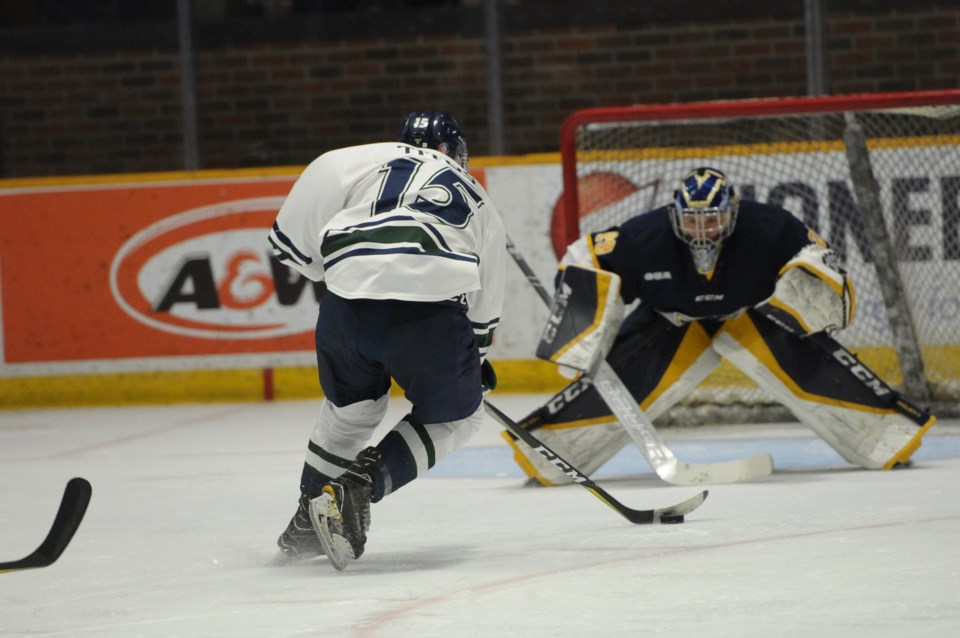 Photo courtesy Brian Doherty.
The latest chapter of the Battle of the North and the 705 Challenge Cup was written Wednesday night at Memorial Gardens.

The Nipissing Lakers men's hockey team entertained the Laurentian Voyageurs and it was the Lakers coming away with the 6-2 victory.

The win gives the Lakers another win as the teams look to claim this year's Challenge Cup.

After a scoreless opening period, Nipissing exploded out the gates and scored twice in the opening minute and a half of the second period.

Danny Desrochers had assists on both goals and Kylor Wall grabbed a helper on the second goal as well.

Things quieted down as the period progressed, until the final few minutes.

Laurentian cut into the Nipissing lead, scoring at the 13:33 mark, but the one-goal separation would only last a few minutes.

Tyler Brown would restore the Lakers two-goal advantage, scoring with under three minutes to go in the period.

Matthew Titus picked up the assist on Brown's first of the year.

After a fairly dominant 40 minutes, the Lakers held a 3-1 lead, but more than double Laurentian in the shot department, leading 40-16.

Up a pair, Nipissing looked to put the game away in the third period.

They padded their lead as Jacob Collins made it 4-1 Nipissing at the 8:07 mark and just over a minute late, Deverick Ottereyes found the back of the net to push the advantage to four goals.

Collins' goal was unassisted, while Ottereyes' tally was set up by Jacob Hickey and Lucas Brown.

Ottereyes scored his second of the night on a nice deflection in front of the net off a Devyn Mayea point shot.

Brown grabbed his second assist of the game on Ottereyes' second of the night.

Laurentian would get one back, scoring with just under seven minutes remaining in the third.

Talor Joseph picked up the win in net, finishing with 31 saves.

The Lakers led 58-33 in the shot department when it was all said and done.

Both games are set for 7:30 p.m. starts at Memorial Gardens.