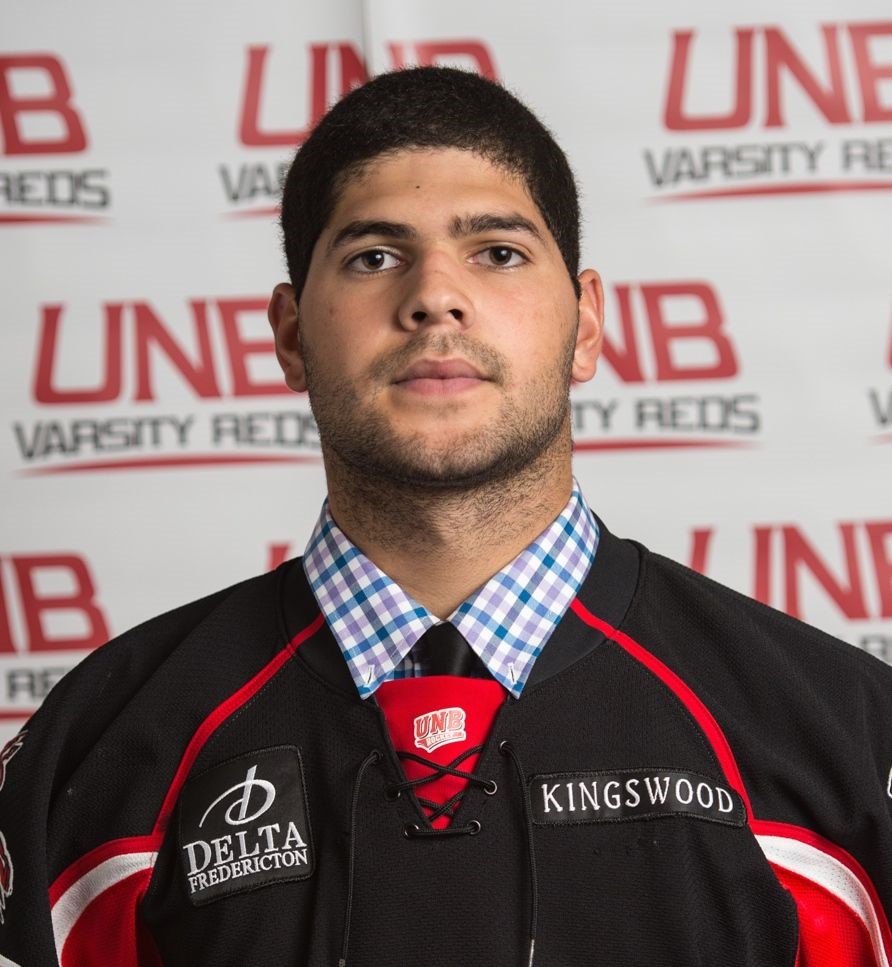 In the two seasons he was here, no matter whom he was up against, Marcus McIvor never backed down.  Ever.

As North Bay Battalion fans, we witnessed the intense battles, the visiting teams attacking with everything in their arsenals, and it was McIvor who bore the brunt of the assault, night after night against the world’s best.  Don’t just take my word for it.  Nineteen coaches in the OHL thought so too. Each season, the annual OHL Coaches Poll paints a rather telling picture of the League’s real stars.  And it’s not just hometown self-puffery either, as coaches aren’t allowed to select their own.  It becomes a true validation of the best of the best.

McIvor, now a defenceman for the University of New Brunswick Varsity Reds, was the best of the best.

If you were to have removed one piece, a solitary piece, so that the entire North Bay Battalion fortress would come crashing down, it would have been Marcus McIvor.  In the Battalion’s remarkable run to an Eastern Conference championship in our first year, and an appearance in the Eastern Conference finals in our second, McIvor was handed the dirty work, and he became our Tom Hanks in Saving Private Ryan: heroic to the end.

His detractors saw his size and decided he wasn’t mean enough.  They wanted McIvor to be a menace to opposing forwards, they wanted a ferocious junkyard dog that would punish opponents mercilessly.  But thuggery would never define McIvor’s game.  He fought, but only if necessary, and rarely went looking for it.  He tangled with heavyweight Justin Kea in his rookie season, Cody Mintz in his second, and Dylan Corson in his third, and that was it.

Though never a penalty minute leader, his intensity was never a question.  He was as fierce a competitor as the Battalion has ever seen.  Often leading from behind, the prototypical stay-at-home defenseman, who dedicated his years to protecting Matej Machovsky and Jake Smith, kept attackers to the outside, often stapling them to the half boards when they threatened the end around.  In McIvor, the Battalion coaching staff had a trusted lieutenant on the ice.  He understood the playbook better than anyone else, and in his years on the blueline had earned the coach’s trust, rising through the ranks.

“He’d be the guy that I’d rely on, on a nightly basis, to play big minutes, all situations,” recalls Ryan Oulahen, the Battalion’s assistant coach in charge of defense.  “By his overage season he was playing power play, penalty kill and, of course, against the other team’s top line.  He was kind of the unsung hero in a lot of respects because he would have the tough match up, he would have the tough minutes against the other team’s top guys, and he did a great job.”

The impact that McIvor had on the Battalion franchise can be traced back to his minor midget year, as OHL teams approached draft day.  As a big defenseman, the 6-foot-2, 190-pound Whitby Wildcat was a sought after prospect, and the Battalion were looking to shore up their blueline.

“At the final scouts' meeting before the 2010 OHL Priority Selection,” recalled Battalion team owner Scott Abbott, “there was a 20-minute discussion about whom we should take among five defencemen who were likely to be available at our first-round pick.  I think we made the right choice. From playing alongside fellow 16-year-old Dylan Blujus as a rookie, to his final season, and the franchise record for games played, Marcus was rock solid.”

Having been a dominant player in minor hockey, the step to the OHL required a period of adjustment.  Those who have been with the Battalion organization for a while, like Oulahen, saw McIvor’s development from day one, and were amazed.

“He's kind of taught me how a player can grow,” said Oulahen.  “I got to work with him when he was 16 years old, and even though Marcus was always a strong kid growing up, in this League, in the OHL, you need to be really physically mature, and over the course of his career, he really turned into a man amongst boys, near the end, and in his overage season.”

“His composure improved so much, his ability to play defensive hockey...in minor midget, and growing up, he was an offensive defenseman, and he really transformed into probably the premier defensive defenseman in the league, for the last one or two years of his career.”

His value to the organization was immediately obvious to former pro defensemen Bill Houlder and The OHL Tonight on TVCogeco’s hockey analyst Greg Theberge.

“He's a player that every team would have coveted,” said Houlder.  “As a player you could put him in any situation and knew what you were going to get.  He was known for making it difficult for the other team in his own end and for making a good first past out of his end.”

Theberge concurred, having provided colour commentary for every game the defenceman played at Memorial Gardens, and having always critiqued team defensive play, whether good or bad, Theberge was frequent admirer of McIvor’s work ethic.

“I think his maturation was a way beyond anybody else on the ice, where you never really saw him panic, or become annoyed, or frustrated,” said Theberge.  “He had perfect body language, where you couldn't tell if he had a bad shift, which is very rare.  Consistently, good shift after good shift, and was a mentor to the other defensemen.  Marcus didn't receive a lot of attention or accolades for his contribution to the Battalion's blue line, however, he was the leader in the room, and he set examples and led by his actions.”

To find out exactly what McIvor meant to his teammates, you need look no further than to the player who played with him longest, former team captain Barclay Goodrow, now with the San Jose Sharks organization.

“We grew from being teammates to becoming really good friends,” recalls Goodrow.  “He was a terrific player for the Battalion; he was actually my roommate for a year when we were in Brampton.  You always knew what he was going to bring every game.  He worked so hard and was such a big member of our team, each and every year.  When I was gone he took over the leadership and from what I've heard he did a really good job.”

Today Marcus McIvor is a student athlete playing for the Varsity Reds, a team that regularly competes for the University Cup, the country’s national title.  Finding a balance between athletics and academics often presents a challenge for OHL graduates.  True to form, however, McIvor is comfortable with the task at hand.

“It's different, an adjustment,” said McIvor.  “It's exam season, I've got three, and I just finished my last paper.  I like it.  Right now I'm in no degree, but I'm taking kinesiology classes.  I'll probably go into Recreation and Sport Sciences or Kinesiology Science.”

Given his legendary status on the Battalion blueline, the conversation slipped easily into a mode of reflection.  He was the embodiment of Battalion Hockey, from a defensive perspective, and his hard-nosed reputation was well deserved.  As fans of the game, we’re learning what Battalion Hockey looks and feels like, and had the good fortune to see it in full demonstration, especially in the playoffs, during the Bobby Orr Trophy-winning campaign.

“Battalion Hockey has meant the world to me,” beamed McIvor.  “I enjoyed every minute I was there, my five years was a great time.  Coach Stan Butler wants a hard-nosed game, and that suited my game well, so it was a good match.  It's always going to require a period of adjustment but once you buy into it, and do the right thing, then it becomes a lot easier.”

But things in Fredericton haven’t got off to the start that McIvor had anticipated.  It is bitter irony that the Battalion franchise’s ironman suffered a serious injury that has sidelined him for much of the season.

“I fractured my ankle, pinching down the wall, and I fell awkwardly,” explained McIvor.  “Definitely unfortunate, but I just have to keep rehabbing and hopefully I can get back soon.  We were playing an away game against the St Thomas Tommies on October 4.  You always want to be playing, and anytime you get hurt it’s definitely disappointing.”

Despite the setback, the Varsity Reds are happy to have a workhorse like McIvor in their stables.

“He had a great start for our team and played a key role in our team’s victories over the AHL’s Portland Pirates and NCAA’s top ranked Boston College team,” said Gardiner MacDougall, head coach of the Varsity Reds.  “Unfortunately in Game 4 of our regular season, and our 10th game overall, Marcus broke his ankle so is currently rehabbing from it, and we hope to have him back in line-up for early January. We’re very excited to have Marcus as part of our program here at UNB.”

With only four games under his belt, it may be early to gauge what McIvor thinks of CIS hockey, but he believes he has seen enough in those few games to draw some early conclusions.

“I was starting to adjust to the game, and finding out what I had to do to succeed at this level,” said McIvor.  “It was just one of those freak accidents that just happen.  You can't go into any league and expect that you're going to run through it. You have to respect the League, respect the players you're playing against.  These days, everyone in the League are ex-junior players who've played three years or more, so they're older and more mature.”

As it came time to part ways, McIvor reflected upon the scene of his considerable successes, the city of North Bay, and Memorial Gardens and its fans.

“The place is incredible.  The last years I was there were some of the best years of my life,” said McIvor.  “Those fans, the city, was just so great, so loyal.  I've nothing but a ton of respect for that city.  I can still remember that Jamie Lewis goal against the Oshawa Generals in Game 4, and I've never heard a louder building in my five years there.  The fans really helped us out a lot.”