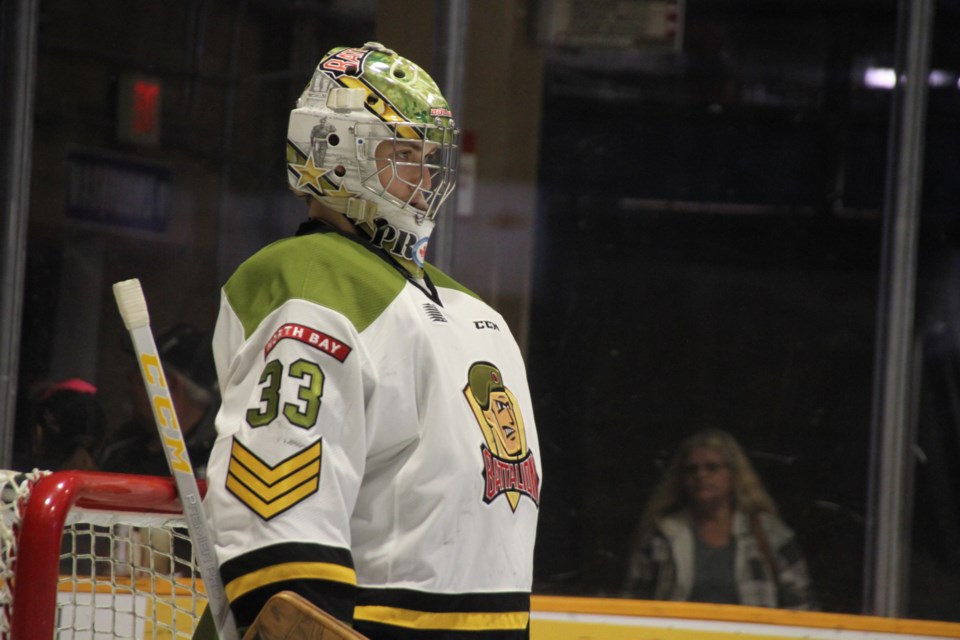 The North Bay Battalion has received a conditional 15th-round pick in the 2022 Ontario Hockey League Priority Selection in a trade that sent goaltender Christian Propp to the Sault Ste. Marie Greyhounds, it was announced Wednesday.

“Given our overage situation and what we feel is the depth in goaltending in our organization, we wanted to give Christian an opportunity to play in the league,” said Stan Butler, Battalion director of hockey operations and head coach on Battalionhockey.com.

“We found him a good opportunity with a good team. We’re appreciative of everything he did for us in his time here and we wish him well. We thank him for his contribution to the Battalion.”

The Hounds felt they had a need to add the overage netminder.

“When evaluating the goaltender position this off season, we knew we wanted to acquire veteran goaltending that will add depth to our team,” stated Kyle Raftis, Greyhounds GM in a Hounds release.

“In acquiring Christian, we now have a goaltender who has been a starting goalie in this league, and one that we believe is ready to take another step in his development. We think Christian has a lot more to prove moving into his overage year and are looking forward to having him in the Soo,” he ended.

The trade for the Greyhounds’ selection leaves the Battalion with four potential overagers, in defenceman Nick King, centre Matthew Struthers and left wingers Daniel Walker and Brad Chenier. Teams are allowed to dress a maximum of three in any given game.

North Bay’s goaltending ranks include Christian Purboo, who played 23 games last season as Propp’s backup, and Joe Vrbetic, who saw action in relief in one game and starred with the affiliated Powassan Voodoos of the Northern Ontario Junior Hockey League.

Other goaltenders in the system are Christian Cicigoi, also a standout with Powassan, locals Reece Proulx along with Owen Wray and William Nguyen from the Nepean Raiders AAA midgets.

Propp, who turned 20 on March 27, played one and a half seasons with the Battalion after being acquired in an Oct. 22, 2017, trade from the Owen Sound Attack, which got him earlier that day in a deal with the Barrie Colts. The Troops acquired Propp and a 10th-round choice in 2020 for defenceman Brady Lyle and a 2020 seventh-rounder.

In two playoff seasons with the Battalion, against the Kingston Frontenacs and Niagara IceDogs, Propp had a 2-8 won-lost record, a 3.61 GAA and a .914 save percentage.