“Our group has worked really hard on this one, given the circumstances there has been a lot of video being watched. But right across the board our entire staff was very comfortable with the player.”
Jun 30, 2020 2:35 PM By: Matt Sookram 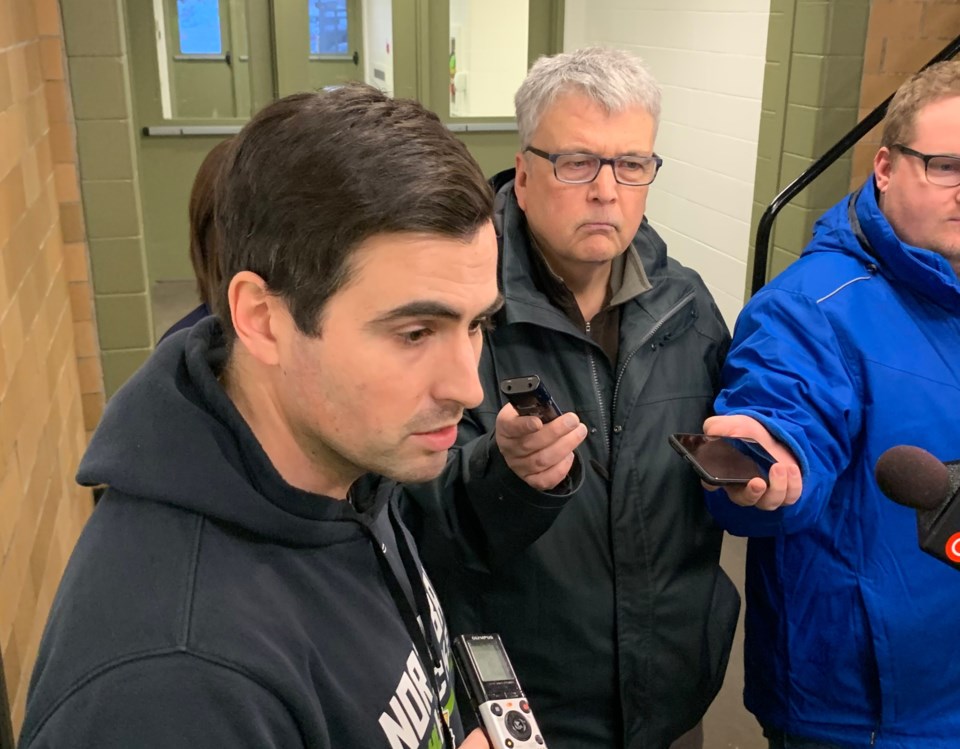 The North Bay Battalion have filled out their import slots with a pair of Russian forwards as they look ahead to the 2020-21 season.

In the Canadian Hockey League Import Draft on Tuesday, the Troops used the first overall pick to select Matvei Petrov of Gus-Khrustalny, Russia. Listed at 6’1” and 163 lbs. the Right Winger will look to bolster the front corps that has already been added to with his fellow country man Matvey Guskov, whom the Battalion traded for in June, sending picks back to the London Knights.

Battalion General Manager Adam Dennis says they are picking a guy that across the board was a consensus number one pick.

He says, “Our group has worked really hard on this one, given the circumstances there has been a lot of video being watched. But right across the board our entire staff was very comfortable with the player.”

“We had a couple of conversations with him prior to today and there is a familiarity with Matvey Guskov as well. So, we felt very comfortable making this selection and we think he can add a lot to the program.”

The 17-year-old Petrov was impressive in the U16 ranks overseas, playing for Rus Moskva in 2018-19 as he accumulated 32 goals and 51 points in 24 games. Last season he played in the Junior Hockey League (MHL) which is made up of teams that act as a feeder system to teams in the Kontinental Hockey League (KHL).

Head Coach Ryan Oulahen says he is a player that is “going to want to score goals.”

“He is an electrifying player. He can shoot, he’s got high end skill. He is a guy that I thought can be put into some situations to have somebody like Matvey Guskov do some work and he’ll become a bit of a playmaker.”

It is very early in the off-season and Oulahen says its all just speculation that the two Russian forwards will have chemistry on the ice. But even if they don’t Oulahen says, “we have other players on the team that can really help that combination as well, so we’re going to have to let the guys sort it out. But certainly, I think there is going to be a little bit more flair on this team. It should be fun watching those guys celebrate some goals.”

Usually the NHL draft will happen before the CHL Import Draft, which gives teams in the CHL a bit of an indication as to which players are more likely to report. But Dennis says with the conversations they have had with Petrov, they are confident he will be wearing a Battalion uniform when the season begins.

He says, “there was some uncertainty with the NHL draft, I’m sure for some teams that played a factor.  But we were very comfortable that he could come in and contribute right away and be here for a couple of years.”

As a 2003 birth year player, that gives Petrov a chance to grow with this already young and dynamic squad that Dennis has spent the last year shaping and moulding into a team that hopes to be in championship contention in the not to distant future.

He is joining a group that will feature just one over age forward in Captain Luke Moncada. Brandon Coe, Mitchell Russell, Mason Primeau and Harrison Caines, along with Guskov, are some of the 2001 birth year guys that will be leaned heavily upon in the upcoming season. Liam Arnsby, Josh Currie, Kyle Jackson and Alex Christopoulos are going into their second years and Oulahen says all that depth will pay off for the team in the long run. “We want to be a really hard team to come in and play against and to do that, you have to have depth in this league.”

“Now we have an opportunity to put combinations together in our minds, although we are going to let the players sort that out and give a lot of guys opportunity. But when you add to the depth and skill and talent, you now have competition on your team and you’re going to get the most of everyone on a nightly basis.”

This is the first time the Battalion have ever drafted first overall in the CHL Import Draft. Prior to this, in 1998 the team selected Nikolai Antropov from Kazakhstan at the number two spot, although Antropov never played for the Battalion. The troops have had five other top ten picks, and coincidentally they have all been used on players from the Czech Republic. Starting with Rostislav Klesla at number four in 1999. Followed by Kamil Kreps being the fifth overall pick in 2001 and Martin Lojek in 2002. In 2011, Patrik Machac, would be the last top ten CHL Import Draft selection for the franchise for six years as he was taken at number ten. Until this year, the last time the franchise drafted as high as the top ten was in 2017 when they looked to bring in New York Rangers prospect Filip Chytil, but he did not report to the club.

Since the Troops moved North, they have had mixed results with their import selections.

Both Alexander Henriksson (32nd overall) and Vincent Praplan (92nd overall) were chosen in 2013. At 34th overall Hampus Olsson was taken in 2014, followed by Max Kislinger in 2015 at 43rd overall. But that ended the string of players who would report to North Bay as in the same year as Kislinger, Robin Kovacs was taken 71st. Adam Thilander then made his way to the Gateway City in 2016, selected at 36th overall. Egor Postnov (22nd) and David Maier (62nd) came in 2018 after the Troops made Chytil their selection in 2017. In 2019 the Battalion picked two players who are no longer on the roster with Martin Hugo Has (23rd overall) being shipped to Guelph at last years deadline, and Niki Korpialho (66th overall) was released midway through the season.

There will be more coming on Petrov, as he is scheduled to take part in a Zoom Conference interview/meeting on Thursday alongside Matvey Guskov.

As for now, the Battalion continue to remodel themselves and look to take the franchise in a new direction as Dennis stated it was important for the team to get an impact player with this selection.

He says, “I think its important for everyone. The team, the coaching staff, the fanbase. Its all about being noticed and getting people that want to come play here. Its an exciting thing for our program and it is a testament to our coaching staff and our scouts that the team is showing a lot of promise and people want to be a part of it.”