MONTREAL — The expected signing of Canadian national team midfielder Samuel Piette is about the only thing anyone on the Montreal Impact has to smile about lately.
Aug 2, 2017 5:29 PM By: Canadian Press 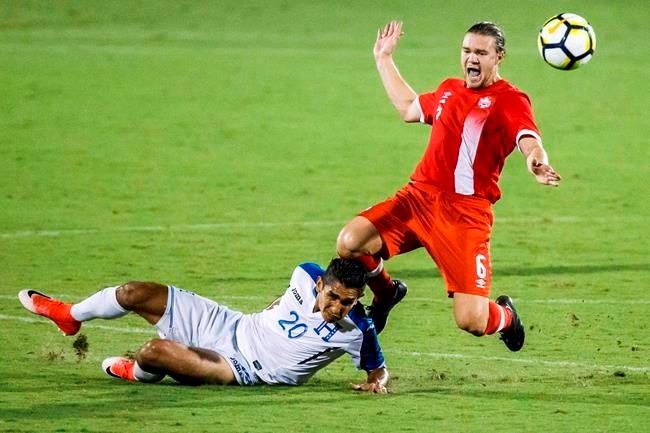 MONTREAL — The expected signing of Canadian national team midfielder Samuel Piette is about the only thing anyone on the Montreal Impact has to smile about lately.

Assistant coach Jason Di Tullio said Wednesday that the acquisition of Piette, a workhorse defensive midfielder from Repentigny, Que., is "close. We're confident that it will be done soon."

Piette, who would need to transfer from CD Izarra of the Spanish second division, has been playing in Europe since he was a teenager but looks ready to head home. The 22-year-old has already played 35 times for Canada, and was eye-catching in recovering balls at the back of the midfield at the recent CONCACAF Gold Cup tournament, where Canada fell to Jamaica in the quarter-finals.

He could be a valuable addition to a team whose starting defensive midfielders, Marco Donadel and Hernan Bernardello, are in their 30s, while Patrice Bernier, who sometimes plays in that spot, is expected to retire at the end of the season.

Piette would be the third player to join Montreal in the current transfer window after Jamaican left back Shaun Francis, who scored against Canada at the Gold Cup, and Romanian centre back Deian Boldor.

Otherwise, there hasn't been much to cheer about on a team that has lost four of its last six league matches and dropped to 10th in the MLS Eastern Conference. The Impact (6-8-6) are coming off a 4-0 away loss to the New York Red Bulls on Saturday that could have been worse if not for a goal post and some deft blocks by the defence.

"I don't think I've been a part of something in my career that was that bad," fullback Daniel Lovitz said of the defeat. "I hope that's as bad as it'll ever get.

"We've got to crawl our way back up and our first chance is this weekend."

That would be a home game Saturday against seventh-place Orlando City (8-6-6), who are winless in their last three.

Practices have been intense this week, with head coach Mauro Biello in a particularly foul mood. Before losing to the Red Bulls, the Impact were outplayed at home in a 2-1 setback to Dallas. In their four most recent losses, they were outscored 13-3.

"One of the things I noticed on the field on Saturday is that when things started to go south it was pretty quiet," said Lovitz. "That's not a good sign.

"That's something we're working on. It's been a point of emphasis."

It didn't help that they wasted some early chances against the Red Bulls, but they were overwhelmed when New York went ahead.

They will need to turn their season around soon. If they hope to make a push for the playoffs this is the time, with five of their next six games at home.

"We knew it would be a game where we were going to suffer, possession-wise," said Di Tullio. "We knew we'd create some chances and we did in the first half, but when you don't bury them and you have a confident group like the Red Bulls...

"The message has been that it's not about feeling sorry for yourself, it's about working hard and pushing and getting out of your comfort zone. So we tried to bring up the intensity this week and the players have responded fantastically. You could see the willingness to compete and do something good on Saturday."

The Impact hope to have star midfielder Ignacio Piatti back on full form. The Argentine, who was Montreal's lone representative at the MLS all-star game this week, looked to have chemistry with May acquisition Blerim Dzemaili before suffering an adductor injury.

Piatti even told the MLS Spanish website this week that he hopes to extend his contract with Montreal by up to two years.

Donadel is also back from having a knee treated in Italy.

There is a chance that Francis will see his first action, possibly replacing Lovitz.

They may be without centre back Kyle Fisher, who missed practice this week while undergoing concussion protocol. Young midfielder Ballou Tabla is also a question mark with pain, but no apparent damage, in a knee.