Ross Braude took a leap of faith when he boarded a plane from his native South Africa to take part in a Rugby Canada high-performance camp last November on Vancouver Island. "Definitely a lot of nerves," Braude said.
May 14, 2021 4:30 PM By: Canadian Press 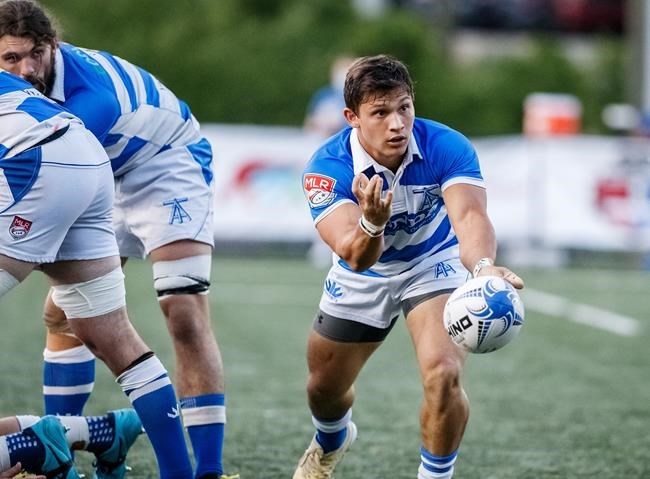 Ross Braude took a leap of faith when he boarded a plane from his native South Africa to take part in a Rugby Canada high-performance camp last November on Vancouver Island.

Eligible to play for Canada through his Montreal-born father, the young scrum half got a warm reception.

"That's one thing I can say about the Canadians I've been involved with. They're really good people and really made me feel welcome," he said.

Braude (pronounced Brody) has found a home with the Toronto Arrows, with national team coach Kingsley Jones watching his progress in Major League Rugby with interest.

Braude, now 21, and the Arrows are in Texas on Saturday to take on the Houston SaberCats.

Albornoz has won one cap for Canada while Povey, English-born but eligible for Canada through his mother who is from Montreal, has four caps.

Braude was with Super Rugby's Bulls before coming to North America. He represented the team at the under-19 and under-21 level as well as playing in the SuperSport Rugby Challenge, South Africa's second-tier competition.

Braude grew up in the Pretoria area and captained Grey College, a school in Bloemfontein renowned for the rugby talent it produces. He represented South Africa in sevens at the under-18 level and was named to a Junior Springboks camp roster before coming to Canada.

Interested in trying rugby elsewhere, Braude had his agent put out feelers with MLR one possible destination. Arrows COO and GM Mark Winokur, who brought him to Jones' attention, worked with the Bulls director of rugby Jake White to secure his release.

The trip to Langford, B.C., for the November camp was Braude's first visit to Canada. After spending the holidays back home, he signed with the Arrows and came to Toronto in February before moving to the Atlanta area where the team has set up shop during the pandemic.

"It's been interesting," said Braude. "I've never been to the U.S.A. before so every weekend, every trip, is something new for me. I've been enjoying it. Even with all the difficult times (with COVID-19), staying in an hotel the whole time, I still find it quite good."

The Arrows started receiving their COVID vaccinations in late April, with the state of Georgia making them available for everyone 16 years or older.

Braude says the trip to the New York area to play Rugby United New York has been a travel highlight so far, with this weekend's stop in the Lone Star State also much anticipated.

"I'm very excited for Texas this weekend because that's one of the places I wanted to go for a long time ," he said.

Braude, who first picked up a rugby ball when he was four, says he is impressed by the standards in MLR.

The five-foot-six 185-pounder has also benefited from time with former Wales star scrum half Rob Howley, an assistant coach with Canada and consultant to the Arrows.

"All my questions, I go to him and he's always got a good answer and an answer that makes a lot of sense," said Braude.

The Arrows are well-stocked at scrum half with Canadian internationals Jamie Mackenzie and Andrew Ferguson and Irish-born Jason Higgins, who has Canadian bloodlines.

Braude's father Gary was born to South African parents, who moved back home after a couple years in Canada.

The two countries have had previous rugby ties.

Winger DTH van der Merwe was born and raised in Worcester, South Africa, moving to Canada in 2003 as a teenager when his father, a doctor, brought his family of five to Saskatchewan for a better future.

Van der Merwe, who retired from international play in October 2019, went on to play 61 tests and became Canada's all-time leading try-scorer with 38. He played in four World Cups and captained Canada five times. He now plays in MLR for the Los Angeles Giltinis.

Centre Christian Stewart, born in Canada to a South African father and Canadian mother, went to school in South Africa and started his pro career there. He was invited to play for Canada in the '90s, winning 14 caps for Canada and then three for the Springboks after he was eligible to make the switch.

This report by The Canadian Press was first published May 14, 2021