SEOUL, Korea, Republic Of — Tears and hugs after North and South Korean women won the 1991 team table tennis world championships. A standing ovation when athletes from the two Koreas marched together to open the 2000 Sydney Olympics.
Jul 4, 2017 10:55 AM By: Canadian Press 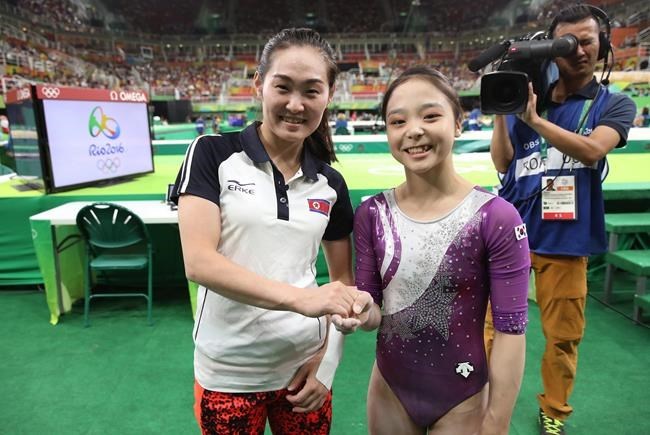 SEOUL, Korea, Republic Of — Tears and hugs after North and South Korean women won the 1991 team table tennis world championships. A standing ovation when athletes from the two Koreas marched together to open the 2000 Sydney Olympics. A selfie taken by a South Korean gymnast with her North Korean opponent that went viral at last year's Rio de Janeiro Games.

Seven months ahead of the Pyeongchang Olympics, South Korea's new liberal President Moon Jae-in hopes the first Winter Games on Korean soil could produce more of these feel-good sparks of seeming reconciliation and pave the way for deep engagement to ease the rivals' 72-year standoff.

In a good development for Moon, IOC President Thomas Bach on Monday expressed his support for Moon's overture while North Korea recently allowed its taekwondo demonstration team to perform in the South in the Koreas' first sports exchanges since Moon's May 10 inauguration.

But there is also plenty of skepticism about Moon's efforts because of a serious escalation in North Korean nuclear and missile arsenals — North Korea on Tuesday test-fired a missile likely capable of striking Alaska — and a weak North Korean winter sports program that sent only two athletes to the 2010 Vancouver Games and none to the 2014 Sochi Games. Sydney and Rio were both Summer Olympics.

North Korea's only IOC member, Chang Ung, said last week that on the Pyeongchang Games could prove hard considering the shortage of time and difficult politics.

What follows is an examination of South Korea's attempt to make North Korea a key part of the Olympics set for Feb. 9-25.

During a speech at the world taekwondo championship in the South that drew Chang and North Korean athletes, Moon appealed for North Korea's Olympic participation while talking about the power of sports and citing the historic "pingpong diplomacy" between the United States and China in the 1970s.

"I think (North Korea's Olympic attendance) would greatly contribute in realizing Olympic values, which are about bringing humanity together and promoting world peace," Moon said during the event's opening ceremony on June 24.

Moon has previously said he wants North Korean athletes to visit the South by crossing over the heavily fortified land border between the Koreas — a deeply symbolic event that would excite frenzied media coverage. He has also proposed holding a pre-Olympic celebratory event at the North's scenic Diamond Mountain, where the two Koreas once ran a tourism program.

During their meeting at Moon's presidential palace in Seoul on Monday, Bach said he actively supports Moon's push for Korean peace and said it's in accordance with the Olympic spirit, according to Moon's office. But some of the measures floated by the Moon government require formal IOC approvals, and Pyeongchang organizers say nothing has been officially determined yet.

Chang suggested it may be too late to try to field a single Olympic team, saying it took five to six months or 22 rounds of inter-Korean talks before fielding a single women's table tennis team in 1991. He also questioned how much sports could impact relations between the Koreas.

"Did table tennis improve relations between the United States and China? Pingpong was able to work as a catalyst because a political foundation had already been created. The world was saying pingpong made things work, but that wasn't the case," Chang told South Korean reporters last week. "Politics are always above sports."

North Korea is not strong in winter sports.

The only North Korean athletes who are thought to have a realistic shot at making the 2018 Olympics are a North Korean pairs figure skating team. Even if they qualify, it will mean less than 10 North Koreans — two athletes plus coaches and officials — would come to Pyeongchang.

This small squad — or no athletes at all — could make it difficult to create a mood of reconciliation. Still, South Korean officials are looking at other ways to get North Korea involved.

Pyeongchang's organizing committee said it's discussing with South Korean government officials whether to ask the IOC and other international sports bodies to give North Korea special entries if no North Korean athletes qualify for the Olympics.

South Korea is also reviewing whether to hold out-of-competition matches during the Olympics that would allow North Korean athletes to compete, according to Moon's Unification Ministry.

The South's organizing committee said special entries and extra games have not been allowed at past Winter Games.

Relations between the Koreas are dismal as the North pursues its nuclear ambitions.

Moon has pledged to improve ties and promised to use the Pyeongchang Games to ease cross-border animosities. But any big North Korean weapon test close to the Pyeongchang Games could trigger strong anti-North sentiments both at home and abroad and make it hard for Moon to press ahead with his overtures.

"What's most important is that North Korea not act in a way that earns President Moon criticism when he makes a gesture of reconciliation," said Jung Moon-hyun, a sports science professor at Chungnam National University in South Korea.

At the height of the Cold War, sports were another battlefield between the Koreas. North Korea boycotted the 1986 Asian Games and the 1988 Olympics, both held in Seoul.

But sports exchanges briefly flourished in the early 1990s before a nuclear crisis erupted. This included the North-South women's table tennis team championship over China in 1991, and a unified world youth boys' soccer team that reached the quarterfinals later that year.

These were the last unified Korean sports teams, but the rivals found other ways to .

After the leaders of North and South Korea met for landmark summit talks in Pyongyang in June 2000, athletes from the Koreas walked behind a blue-and-white "unification" flag for the first time at the opening ceremony of the Sydney Summer Games. This happened at other major international sports events, but the practice stopped after the 2007 Asian Winter Games in Chuangchun, China.

Despite terrible political ties amid the nuclear standoff, cross-border sports exchanges between the Koreas did not disappear entirely.

North Korea attended the 2014 Asian Games held in Incheon, South Korea. At the close of the games, three top Pyongyang officials made a surprise visit and held the Koreas' highest-level face-to-face talks in five years.

This spring, North Korea's women's ice hockey team came to the South to take part in the group rounds of the world championships, while the South's national women's soccer team to the North for an Asian Cup qualifying match.

One of the feel-good highlights of the Rio Games last year came when a 17-year-old South Korean gymnast named Lee Eun-ju took a selfie with North Korea's Hong Un Jong as they trained for competition. The photo captured global headlines, and Bach described it as a "great gesture."

It's far from certain whether Pyeongchang will have any similar gestures.