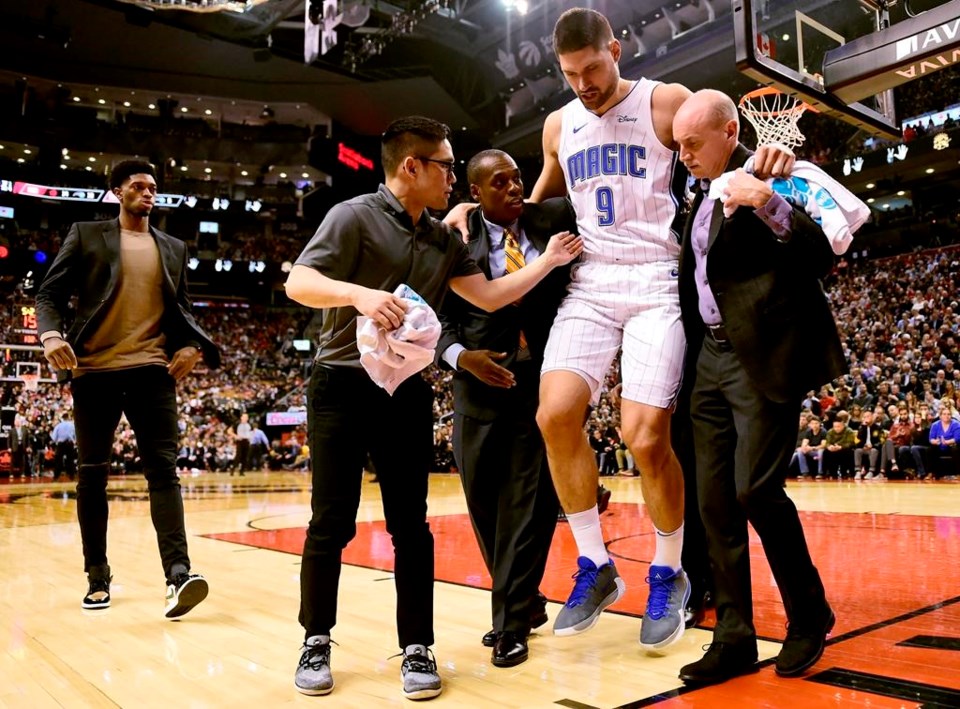 The Magic dropped to 0-5 away from home after a 113-97 loss in Toronto that saw all-star centre Nikola Vucevic and forward Aaron Gordon exit in the second quarter with right ankle sprains.

"It's tough," said Evan Fournier, who led the Magic with 21 points on the night. "Hopefully it's not too long for Aaron. Vuc seems to have a pretty big sprained ankle. We're going to have to find ways to score the ball differently and kind of adapt the way we play."

"They're hurt, they're not dead. We still have a lot of games left."

Orlando (6-8) and Oklahoma City are the only teams in the NBA yet to win away from home this season.

Vucevic had to be helped off the court with 5:29 remaining in the second quarter. The seven-footer from Montenegro landed awkwardly as he tried to stop a Norman Powell drive to the basket.

X-rays on Vucevic's ankle wee negative but the pain was real.

"It was hard for me to put any pressure on," he said. "We'll see. I'm supposed to get an MRI (Thursday) and then I'll know more after that. It's pretty painful right now.

"It was a full jump. I came down and landed on the back of someone's leg and rolled over," Gordon said. "That's why I knew it was hurt a little bit more, because I had jumped all the way up."

Gordon also had an X-ray but there was no immediate word on the result.

Vucevic was coming off an Eastern Conference Player of the Week performance for the period ending Nov. 17.

Vucevic had three points on one-of-seven shooting when he was injured Wednesday. His three-pointer in the first quarter ensured that Orlando has now made at least one three-point field goal in 998 consecutive games, dating all the way back to March 17, 2007 — the fifth-longest active streak in the league.

Gordon had two points on one-of-three shooting when he exited.

Orlando arrived on the back of three straight home wins over Philadelphia, San Antonio and Washington. The Magic, who lost six of their first eight games of the season, had won four of their previous five.

Wednesday was the first stop of a four-game road trip that will take the Magic to Indiana, Detroit and Cleveland.

Forward Jonathan Isaac returned to the Magic starting lineup after missing two games with an ankle sprain. Isaac, who scored a career-high 24 points in the Oct. 28 loss in Toronto, had 16 points and a career-high 13 rebounds.