TORONTO — There are some goaltenders this season chasing milestones, others trying to bounce back from a disappointing season, while others are looking to make a good impression on a new home. Here are five to keep an eye on in 2017-18: 1.
0
Sep 29, 2017 7:09 PM By: Canadian Press 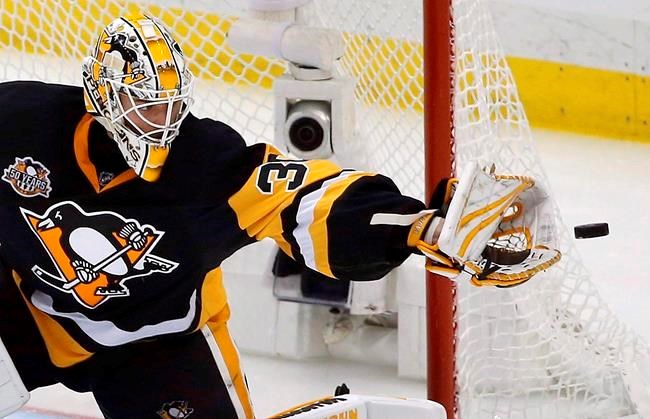 TORONTO — There are some goaltenders this season chasing milestones, others trying to bounce back from a disappointing season, while others are looking to make a good impression on a new home. Here are five to keep an eye on in 2017-18:

Murray already has two Stanley Cups rings and the confidence of his team despite being only 23 years old with 62 career regular-season games under his belt. The Pittsburgh net officially belongs to the Thunder Bay, Ont., native now that franchise wins leader Marc-Andre Fleury is with the expansion Vegas Golden Knights. The Murray-Fleury tandem gave Penguins head coach Mike Sullivan an insurance policy last season — most notably when Murray missed the beginning of the playoffs with an injury. A healthy Murray should easily exceed the 47 starts he made last season if healthy.

The Jets have struggled with consistent goaltending since relocating from Atlanta and think they have found, for at least right now, the solution with Steve Mason. Winnipeg signed the 29-year-old veteran on July 1 to a two-year deal after he spent the past five seasons in Philadelphia. He, at minimum, should ease the work load for 24-year-old Connor Hellebuyck. Mason has made 445 career starts in 10 years between Columbus and the Flyers, while Hellebuyck has made 79 over the past two seasons.

After years of erratic goaltending limiting their success, the Stars hope to have finally corrected the issue by acquiring Bishop in a trade with LA and signing him to a six-year deal worth US$29.5 million. The 30-year-old, statistically, is coming off the worst year of his career, but had injuries that affected him at different parts of the season with Tampa Bay and Los Angeles. The Denver native was acquired by the Kings leading up to last year's trade deadline to work in tandem with Jonathan Quick for a playoff push, but he won just two of seven starts and LA missed the post-season.

With Calgary looking for a starter, and Arizona tearing down to rebuild, Smith became the veteran option the Flames wanted and acquired him in a trade. The 35-year-old Smith is past his best days, but Calgary believes he can hold his own in front of a strong defence and take them further than last season's first-round exit. The Flames finished with the top wild card in the West last year, however they found themselves in a deep hole early in the season because of inconsistent goaltending from Brian Elliott, who left as a free agent. Smith had career-best numbers in 2011-12, but since then has statistically been below average.

Luongo had a difficult season in 2016-17 in large part because of injuries, but this year has a few milestones to reach if he can stay healthy. The 38-year-old Montreal native is 34 games away from reaching 1,000 for his career and would be just the third goalie in league history to hit the mark. He's six games away from passing Terry Sawchuk (971) for third on the all-times games list for a goalie and needs just two wins to pass Curtis Joseph (454) for fourth all-time.

Note to readers: This is a corrected story. A previous version listed Murray's home town as Sault Ste. Marie, Ont., instead of Thunder Bay.