TORONTO — Dylan Larkin scored on a breakaway at 2:48 of overtime and the Detroit Red Wings beat the Toronto Maple Leafs 5-4 on Thursday night after blowing a three-goal lead in the third period.
0
Dec 7, 2018 2:07 AM By: Canadian Press 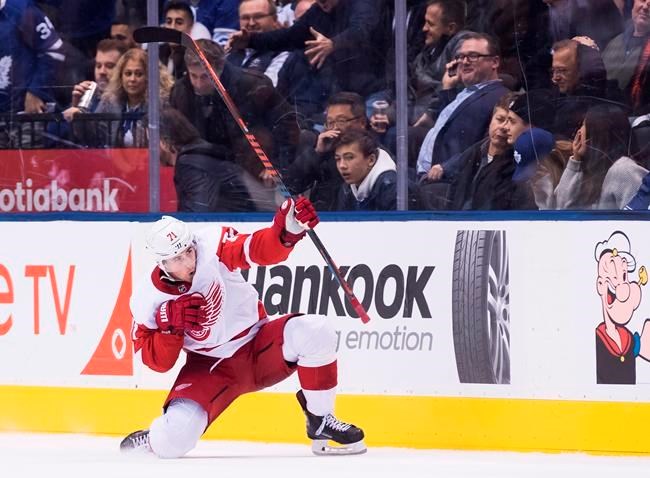 TORONTO — Dylan Larkin scored on a breakaway at 2:48 of overtime and the Detroit Red Wings beat the Toronto Maple Leafs 5-4 on Thursday night after blowing a three-goal lead in the third period.

Gustav Nyquist set up the winner, and finished a goal and two assists. Mike Green had a goal and an assist, Jonathan Ericsson and Luke Glendening also scored, Larkin had an assist and former Maple Leafs goalie Jonathan Bernier stopped 27 shots.

Andreas Johnsson and Kasperi Kapanen had a goal and an assist each for Toronto. John Tavares and Zach Hyman also scored, and Sparks made 27 saves.

William Nylander suited up for his first game since coming to terms with Toronto on a new six-year, $45 million contract over the weekend. The 22-year-old winger got a mostly warm reception when he stepped on the ice for his first shift, and started on a line with Auston Matthews and Patrick Marleau before getting benched midway through the third period.

Sidney Crosby had his 15th goal and had two assists, and Riley Sheahan scored his fourth goal. The Penguins have won two straight and five of eight following a slump in which they won once in 10 games.

Jake Guentzel had three assists and has a career-best six-game points streak for Pittsburgh.

Casey DeSmith made 19 saves to win for the fifth time in six starts.

Anders Lee and Brock Nelson scored for the Islanders.

Jakub Vrana scored his third goal in two games and Matt Niskanen had one on his birthday to help the Capitals end Arizona's four-game winning streak. Alex Ovechkin added an empty-net goal and became the fastest player in NHL history — ninth overall — with 5,000 career shots, reaching the mark in 1,031 career games. Marcel Dionne was the previous fastest at 1,215 games.

Boston pulled to 3-2 on David Krejci's goal with 1:45 remaining.

Brayden Point also scored and Louis Domingue made 33 saves to help the NHL-leading Lightning improve to 22-7-1. David Pastrnak also had a goal for Boston, and Tuukka Rask stopped 27 shots.

PHILADELPHIA (AP) — Seth Jones scored his second goal of the game 10 seconds into overtime to lift Columbus past Philadelphia.

Cam Atkinson fed a wide-open Jones in the slot moments into overtime, and Jones beat goalie Anthony Stolarz over his left shoulder. Brandon Dubinsky and Boone Jenner also scored for the Blue Jackets, and Atkinson extended his career-best points streak to 12 consecutive games.

Sergei Bobrovsky made 23 saves to improve to 12-3-1 against his former team. Travis Sanheim scored twice, and Claude Giroux had a goal and an assist for the Flyers.

Smith got his second shutout of the season and has won his past five games.

The Golden Knights won for the seventh time in eight games and moved into a third-place tie with San Jose in the Pacific Division with 33 points. The Blackhawks, meanwhile, dropped their sixth straight and have been outscored 30-17 during the skid.

After allowing the Blackhawks to score three consecutive goals for a 3-2 lead in the third, the defending Western Conference champions responded. Marchessault fired a shot past goalie Corey Crawford to tie the game, and 12 seconds later it was Tuch punching one in to put Vegas back in front.

Bo Horvat and Jake Virtanen each had a goal and an assist for the Canucks, who have just two wins in their last 14 games (2-10-2).

Ryan Hartman, Colton Sissons and Matt Irwin scored for the Predators. Pekka Rinne had 21 saves before being replaced to start the third period by Juuse Saros.

The right wing, who leads the Devils with 14 goals, had not scored in his last 13 games against the Kings and had only two goals in 18 meetings.

Taylor Hall had three assists while Travis Zajac and Will Butcher each had a goal and an assist. Nico Hischier and Blake Coleman also scored for the Devils, and Keith Kinkaid made 29 saves.

Brendan Leipsic, Adrian Kempe and Kyle Clifford scored for the Kings, who have dropped four of five and are last in the NHL with 21 points. Jonathan Quick stopped 29 shots.