TORONTO — Head coach Nick Nurse told his Toronto Raptors one simple thing heading into the fourth quarter: get the ball to JV.
0
Dec 6, 2018 12:19 AM By: Canadian Press 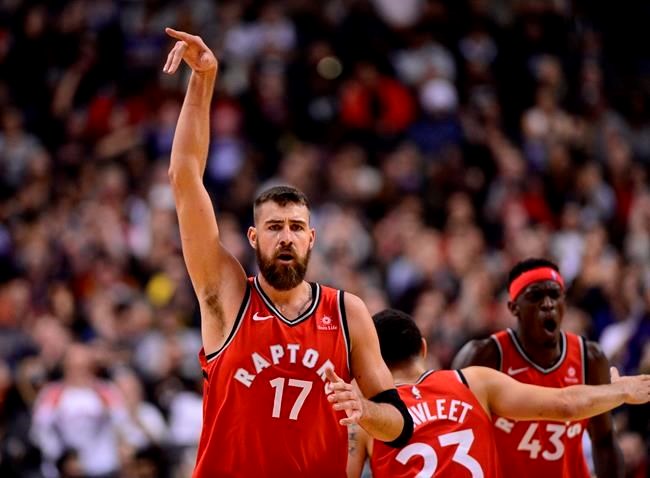 TORONTO — Head coach Nick Nurse told his Toronto Raptors one simple thing heading into the fourth quarter: get the ball to JV.

Jonas Valanciunas had started the game on the bench and only had eight points and four rebounds in six minutes of play through three quarters but Nurse thought his seven-foot centre could exploit a matchup with 76ers big man Joel Embiid.

Nurse was right, as Valanciunas finished with 26 points, eight rebounds and a game-best plus-14 defensive rating as Toronto beat Philadelphia 113-102 on Wednesday.

"May not seem like the best matchup in the world throwing it in to JV against Embiid, but JV had it going and he did a good job," said Nurse. "He was playing that well that we were pumping it in to him in the fourth quarter."

Valanciunas was pleased with the vote of confidence after he had struggled in his past six games, averaging 9.8 points, 6.3 rebounds and a minus-1.2 rating.

"It felt good, it felt good," said Valanciunas. "I'm just doing my job. When the coach feels it like that, that's just extra motivation for me."

Serge Ibaka started at centre for the Raptors (21-5), finishing with 18 points and eight rebounds. Valanciunas impressed in the first quarter with eight points in 3:30 of work but also picked up three quick fouls, forcing Nurse to rely on veteran Greg Monroe and keep Valanciunas on the bench. Monroe finished with four points and four rebounds over 5:36 of play time.

"As long as we're working, I'm totally fine with that," said Valanciunas. "He showed some really good minutes in the five position. As long as we're winning games, it's supposed to be like that."

Ibaka and Valanciunas were effective defensively too, limiting Embiid to 10 points with 12 rebounds for Philadelphia (17-9). Raptors point guard Kyle Lowry said that Valanciunas's post-up game was no match for Embiid, a 2018 all-star who was named to the NBA's all-defensive second team last season.

"I think JV's one of the best offensive bigs there is," said Lowry. "If it was a post-up game then he'd be a max-max player. The league's changed a little bit but when he gets going, he can make shots, he's big, he's strong.

"I've played with him for seven years now, he's just continuously getting better. The feel that he has on the offensive end is amazing."

A 9-0 run by the Raptors bench early in the fourth took an 81-81 game and broke it open. Valanciunas was at the heart of it, grabbing an offensive rebound off a Delon Wright miss and putting away his own layup. Then, after a Pascal Siakam field goal, he hit a fadeaway jumper to make it 90-81.

Before the game Nurse said that Valanciunas can be hard on himself, getting frustrated when the ball isn't falling. Nurse feels that the high standard is why he can rely on Valanciunas in close games.