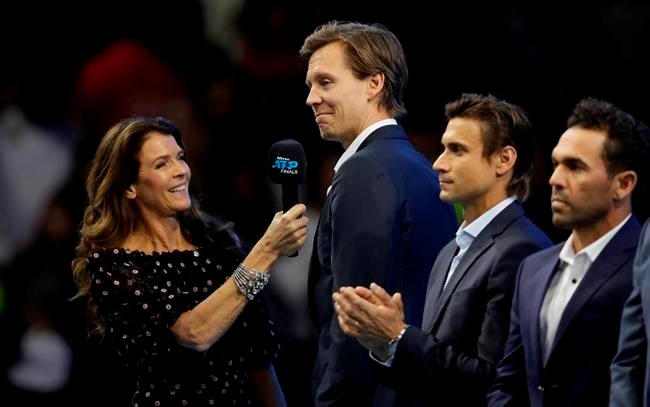 The 34-year-old Berdych confirmed the decision at the ATP Finals, saying his body no longer allows him to compete at the highest level after struggling with a back injury for much of the last 18 months.

The former No. 4 said he made the decision shortly after losing in the first round of the U.S. Open in August. He hasn't played since and is currently ranked 103rd.

"I said, ‘OK that's it. That's enough.’ In terms of just my body doesn't allow me to do so, and it's very unpredictable," Berdych said. "There is no real point to continue."

The Czech said the highlight of his career was reaching the 2010 Wimbledon final, beating Roger Federer and Novak Djokovic along the way before losing to Rafael Nadal.

"Even the final that I lost, it was a very, very special moment," he said.

He also reached the semifinals at least once at each of the other three Grand Slams and earned 13 career titles — including the 2005 Paris Masters — with a career-high ranking of No. 4.

Berdych said he doesn't have any immediate plans for what to do in retirement, but will focus on resting up and spending time with his family.

"The plan is actually not to have any plans," he said. "The last 15, 20 years was so hectic and so demanding that I just need to just breathe out easily after all those years."

Canadian golfer Graham DeLaet withdraws after injuring his troublesome back
Jan 23, 2020 10:56 AM

Toronto Argonauts, Saskatchewan Roughriders to square off in Halifax
Jan 23, 2020 10:43 AM
Comments
We welcome your feedback and encourage you to share your thoughts on this story. We ask that you be respectful of others and their points of view, refrain from personal attacks and stay on topic. To learn about our commenting policies and how we moderate, please read our Community Guidelines.