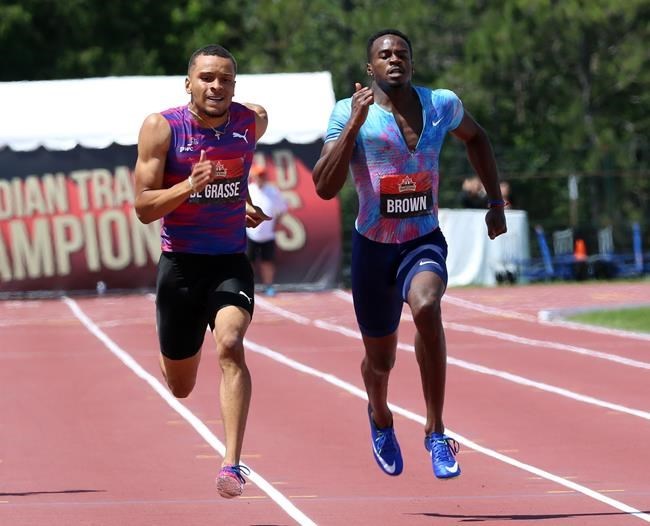 OTTAWA — Long after Andre De Grasse had raced to his second victory at the Canadian track and field championships, the sprint star was still posing for pictures and signing autographs.

The triple medallist from last summer's Rio Olympics raced to his first Canadian 200-metre title on Sunday, and second gold medal of the meet, sprinting to a slightly wind-aided time of 19.96 seconds. De Grasse won his third national 100 title on Friday.

The 22-year-old from Markham, Ont., was the headliner this week, and his star power was visible in the crowds that squeezed into the 6,500-seat Terry Fox Stadium. According to an Athletics Canada official, it was the biggest crowd the national meet has ever seen.

"I'm amazed and shocked that so many people want my autograph," said De Grasse, estimating that number to be "probably hundreds, maybe thousands."

"It's a cool feeling for me, I'm just happy to see all the little kids' faces light up every time I take a picture with them."

De Grasse had some-60 friends and family members — all dressed in red De Grasse T-shirts — in attendance. They posed for a group photo. The photographer instructed them to "Say 'De Grasse!'"

Sunday's 200 was one of the meet's highlights, featuring Canada's three fastest sprinters in history in that distance — De Grasse, and Toronto's Aaron Brown and Brendon Rodney.

De Grasse was pushed by the two around the bend, finally taking the lead down the straightaway. The sprint star said he's been focusing more on the 100 this season.

"But after today I see my 200 needs a little bit of work if I want to become a gold medallist," he said.

He has five weeks before the world championships in London, where he'll face Usain Bolt one final time before the Jamaican superstar retires. Bolt has said he won't run the 200 at worlds. De Grasse, whose last race before London will be a 200 at a Diamond League meet in Monaco on July 21, said it will take a Canadian-record run from him to have a shot at gold. His national record is the 19.80 he ran to win silver in Rio.

Rodney's time, meanwhile, would have qualified him for next month's world championships in London, but the wind was an illegal 2.7 metres per second. Anything over 2.0 is illegal. What's worse, he missed the standard in the previous day's semis by 0.01.

"I'm a little bit gutted," Rodney said. "I have no control over nature. (Saturday), I eased up a little bit too much at the line. . . But that's how it goes."

Crystal Emmanuel of Toronto ran an impressive 22.55 to win the women's 200. Her time would have broken the Canadian record of 22.62 set by Marita Payne-Wiggins — mom of basketball star Andrew Wiggins — in 1983. But the wind was an illegal 2.8 for her race.

Emmanuel won Friday night's 100, winning both sprints for the second consecutive year. Her consistency, she said, has come from a psychological shift.

"I was really up and down with being confident and positive in my races, going in scared, and running just to run and see what I do," said Emmanuel, who raced in knee-high Canada flag socks. "Now I come out positive, confident, knowing I can execute Point A to B and still be amazing."

Reigning world champion Shawn Barber cleared 5.40 metres to win a rain-soaked pole competition. The competition was halted during the downpour, but it left the pole vault mat a soggy mess.

"Sun came back and it was kind of nice again, but of course when you do that the pit is soaked and every time you take a jump, you come off a few pounds heavier," Barber said. "Keeping your pole dry and everything else is tough."

Sage Watson of Medicine Hat, Alta., captured the women's 400 hurdles title in 54.97, fresh off her NCAA title for the Arizona Wildcats.

Brittany Crew of Toronto rubber-stamped her spot on the world team with a victory in the women's shot put. Her throw of 18.32 was the seventh time this season she's thrown the world qualifying standard.