TORONTO — Montreal head coach Claude Julien said back in the spring his young, largely inexperienced roster had a real opportunity to grow after being given a second life by the NHL's restart.
Aug 2, 2020 1:40 AM By: Canadian Press 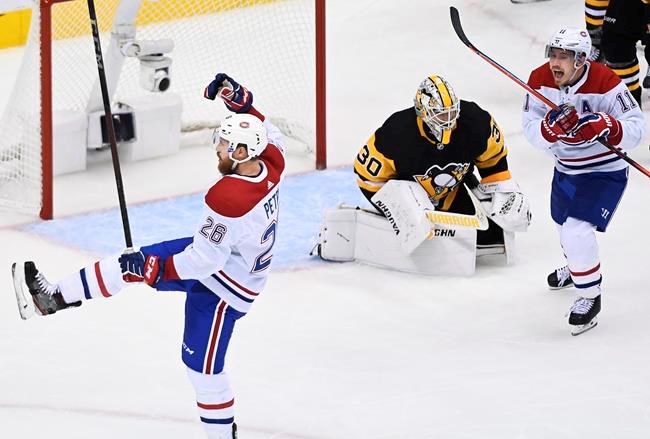 TORONTO — Montreal head coach Claude Julien said back in the spring his young, largely inexperienced roster had a real opportunity to grow after being given a second life by the NHL's restart.

They did that, and a whole lot more, Saturday — with a big helping hand from a couple veterans.

Jeff Petry scored at 13:57 of overtime, Carey Price made 39 saves, and the underdog Canadiens stunned the Pittsburgh Penguins 3-2 to open their best-of-five qualifying round series as the league raised the curtain on the resumption to its pandemic-halted season.

Petry, who along with Price are two of Montreal's oldest players at age 32, picked up a loose puck in the right circle, took an extra stride, and ripped a shot through Matt Murray before being mobbed by teammates in an empty Scotiabank Arena.

"We're playing an experienced team," Julien said. "They've won Stanley Cups, they know how to win, and we have what we have. The only chance we have is that we play on our toes and not on our heels."

Jesperi Kotkaniemi and Nick Suzuki — 19 and 20 years old, respectively — had the goals in regulation for Montreal, the Eastern Conference's No. 12 seed in the league's 24-team format.

"It gives us a lot of confidence," Suzuki said. "A lot of people didn't see us as contenders. We want to show them we can compete with anyone.

"This is a good first step."

A step that wouldn't have been possible without Price, who was lights out early and led 10-1 on the shot clock after just six minutes.

"He made some really big saves," Petry said. "He's calm and collected back there, especially when a team is in on the forecheck and controlling the play."

Sidney Crosby and Bryan Rust replied for Pittsburgh, the No. 5 seed in the East, which will look to rebound in Monday's Game 2 after finishing 1 for 7 on the power play, including coming up empty on a long 5-on-3 in the third.

"The one area where we could have improved throughout the course of our overall game, the power play included, is more of a net presence, just making it hard on Price to see the puck," Penguins head coach Mike Sullivan said. "We had opportunities to get to the net, take away his sight lines, and we didn't do as good a job."

Murray stopped 32 shots as the league returned following a 142-day absence after COVID-19 ground the sport — and much of society — to a halt some 4 1/2 months ago.

Jonathan Drouin had a chance to win it for Montreal earlier in overtime on a penalty shot, but the puck rolled off the end of his stick and dribbled wide.

Tied 2-2 through 40 minutes, Montreal killed off that Pittsburgh two-man advantage for 1:32 early in the third period despite some sustained pressure.

Pittsburgh's Conor Sheary had a golden opportunity to put his team ahead with 3:03 left in regulation, but the winger missed the net on a penalty shot of his own after Crosby hit the post. Montreal then came within a whisker at the other end, but a deflected point shot rang off iron behind Murray and stayed out.

The Canadiens carried a 1-0 lead after the first thanks to Price's stellar performance, and doubled that advantage at 6:53 of the second when Suzuki stole the puck from Brian Dumoulin at the Montreal blue line and raced in on a 2-on-1 before ripping a shot upstairs on Murray.

The battle-tested Penguins, who still have the core from their Cup-winning teams from 2016 and 2017, got that one back on a delayed penalty at 9:55 when Crosby banked a shot in off Price. Then with Drouin in the box, Rust poked a shot home from the lip of the crease 2:39 later to bring Pittsburgh back level at 2-2.

The Penguins came out firing, but Price shut the door at every turn, including two pad stops on Evgeni Malkin as the Canadiens wobbled early.

Coming off a tough sophomore season where he was demoted to the minors and suffered a spleen injury, Kotkaniemi provided Montreal an unlikely counterpunch when a point shot went in off the former No. 3 pick at 11:27.

Tomas Tatar nearly made it 2-0 later in the period with a pair of shotes on a power play, but the winger failed to find the range as Pittsburgh outshot Montreal 18-6 through 20 minutes.

The Canadiens were playing out the string — 15 points back of the Penguins — and looking to next season after dealing some key veterans prior to the trade deadline when the novel coronavirus forced the NHL to suspend its schedule March 12.

Sitting a pedestrian 24th in the standings at the time, Montreal was handed this lifeline when the league decided on a 24-team format.

And while the Canadiens have a second at competing for the Cup, a significant section of their fans are hoping they lose to the heavily-favoured Penguins and then win the NHL's second draft lottery for the right to pick Quebec-born junior star Alexis Lafreniere at No. 1.

Montreal and Pittsburgh squared off in the third game of the day at Scotiabank Arena, which could have been mistaken for a meat locker as the league looks to protect the ice surface from the summer heat, after the Carolina Hurricanes beat the New York Rangers 3-2, and the New York Islanders downed the Florida Panthers 2-1.

"The guys bought in," Petry said. "We've got focus on enjoying this one, but knowing the next game is the biggest one."

This report by The Canadian Press was first published Aug. 1, 2020.