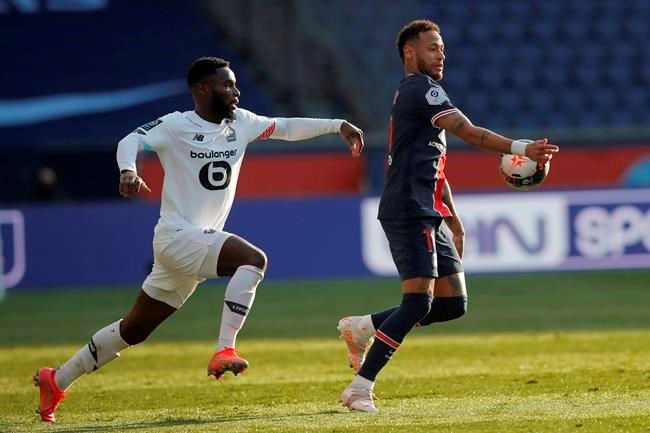 PSG star Neymar was sent off late in the top-of-the-table clash and then tried to confront a player after the game.

David scored in the 20th minute with a slightly deflected strike that had goalkeeper Keilor Navas going the wrong way as PSG slipped to a fifth home defeat and eighth overall, with a tough trip to Bayern Munich on Wednesday in the Champions League.

It was the 10th of the season for the 21-year-old from Ottawa, who was set up by a fine pass from winger Jonathan Ikone.

David did not finish the game, leaving in the 34th minute with an injury.

Neymar was shown a second yellow card in the 90th minute for kicking right back Tiago Djalo off the ball, having been booked in the first half for shoving midfielder Benjamin Andre in the face. Djalo was also sent off and remonstrated angrily with the referee.

As both players argued as they walked back to the locker-rooms, footage from broadcaster Canal Plus captured Neymar pushing Djalo on the shoulder and then trying to get past some security officials to confront him.

An angry Djalo also reacted, trying to reach Neymar, causing one security official to fall over, while another intervened swiftly to block Neymar and lead him away.

“Each time we lose we say the same thing, that we lacked commitment. We shouldn’t find any excuses," PSG captain Marquinhos said. “We need to be stronger than that at home. A lot of teams have come here and won, which we’re not used to. We’re at an important point of the season and must improve."

PSG has been poor against the other sides in the top four, twice losing to Monaco, losing once to Lyon and drawing its other game against Lille 0-0.

“We need more consistency because there have been too many ups-and-downs,” Marquinhos said. "Our next match is one of the biggest.”

Frustration got to Neymar, who now faces another suspension after getting red-carded against Marseille at the start of the campaign. Shortly after shoving Andre in the face, he fell to the ground in a failed bid to win a penalty.

Lille goalkeeper Mike Maignan, who came through PSG's youth ranks before leaving, kept out Neymar's shot on the hour mark and was relieved to see Neymar's diving header go wide in the 70th.

Starting his first game for two months after recovering from a torn adductor muscle, Neymar was wasteful, volleying a cross wide from a good position and squandering two free kicks.

After Maignan got a hand to Kylian Mbappe's low shot in the 15th, Lille caught PSG cold five minutes later on a classic counterattack.

Jonathan Ikone found space down the right and pulled the ball back to David, whose shot from just inside the penalty looped over goalkeeper Keylor Navas.

Andre and Boubakary Soumare, another promising player released by PSG, controlled midfield with relative ease in the absence of PSG's Marco Verratti.

With PSG camped in Lille's half, a counterattack was waiting to happen.

It arrived in the 78th as Timothy Weah squared the ball from the right to Turkey striker Burak Yilmaz, but Navas read his first-time shot well.

Verratti, already ruled out with a thigh injury, tested positive for the coronavirus for the third time. He will miss the first leg against Bayern.

Two hours before facing Lille, right back Alessandro Florenzi was removed from PSG’s squad as a precaution, even though he tested negative, the club said. He was on international duty for Italy recently with Verratti.

Lille was without attacking midfielder Yusuf Yazici, who has the virus.

Monaco, which has now lost only once in 16 league games, struck a double blow early in the second half.

Striker Wissam Ben Yedder was surprisingly left on the bench but came on to notch a fine third when he cut inside a defender and thumped the ball under the crossbar in the 76th.

Ben Yedder was fouled by central defender John Boye and took the penalty to make it 4-0 in the 88th and move onto 15 league goals, one more than Volland.