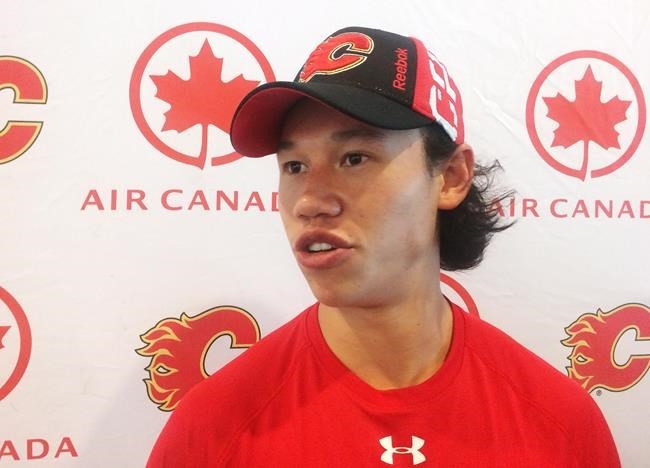 CALGARY — Spencer Foo was "just another college invite" at the Calgary Flames summer development camp a year ago.

The 23-year-old forward from Edmonton was certainly of interest a year later after choosing to sign a contract with the Flames. The coveted college free agent says the Flames took an interest in him before there was a hot market for his services.

His hometown Oilers with star Connor McDavid and their shiny new arena were also on Foo's shortlist of possible destinations.

"When it comes down to it, the NHL's a business," Foo explained Tuesday during the Flames prospects' physical testing in Calgary.

"It might be your favourite team growing up, but they don't see you as that. You're just another player for them. You really have to go where you're wanted the most and where you think you're going to have success.

"The biggest thing it came down to was where I felt wanted the most and where I felt like I could really fit in with the organization.

"I've been talking to Calgary since my freshmen year. Coming to camp here last year, that definitely helps too because I was able to see the type of people that were here."

After 26 goals and 36 assists in 38 games for Union College this past season, the Hobey Baker finalist announced he would forego his senior year even though his brother Parker will play for the Dutchman as a freshman next season.

Foo's destination became part of the annual who-is-going-where hype that surrounds the NHL draft and free agency, and was further fuelled this year by the expansion draft for the Las Vegas Golden Knights.

The six-foot, 180-pound right-winger committed to the Flames prior to the start of unrestricted free agency Saturday.

Foo's two-year, entry-level contract — a US$925,000 annual salary plus bonuses according to CapFriendly.com — became official Saturday.

Making the leap from a relatively light schedule to an 82-game marathon plus playoffs is always a question mark for college players.

Foo points to Pittsburgh Penguins forward Jake Guentzel as an example of success.

After his junior year at the University of Nebraska-Omaha, Guentzel signed with the Pens just over a year ago, was called up last November and scored 13 playoff goals en route to a Stanley Cup in June.

"It just shows you guys are able to make that jump if they're willing to put the work in," Foo said.

Flames general manager Brad Treliving says there is no timetable for Foo.

"I'll be the buzzkill right off the bat," Treliving said last week. "Let's give Spencer some time and let him develop at his own rate.

Foo's father John was born in the South American country of Guyana before moving at age seven to Edmonton.

His mother Diane is from Drumheller, Alta., and met John while attending the University of Alberta, Foo said.

Parker, drafted in the fifth round by the Chicago Blackhawks on June 24, helped the AJHL's Brooks Bandits reach the RBC Cup final this year.

Should Foo make the Flames opening-day roster or get called up during the season, Calgary is an easy drive for his parents to see their son play in the NHL.

"Being close to home, but not right at home where there's all the added distractions helps too," Foo said.

Foo choosing the Flames was an eyebrow-raiser adding yet more spice to the NHL's Battle of Alberta that is truly on again.

"Yeah definitely a little bit, but it's just Twitter at the end of the day," Foo said.