Bianca Andreescu looks to move up in rankings after U.S. Open win

TORONTO — Winning the U.S. Open has made Bianca Andreescu such a big deal that she can leave Drake on read.
Sep 11, 2019 2:44 PM By: Canadian Press 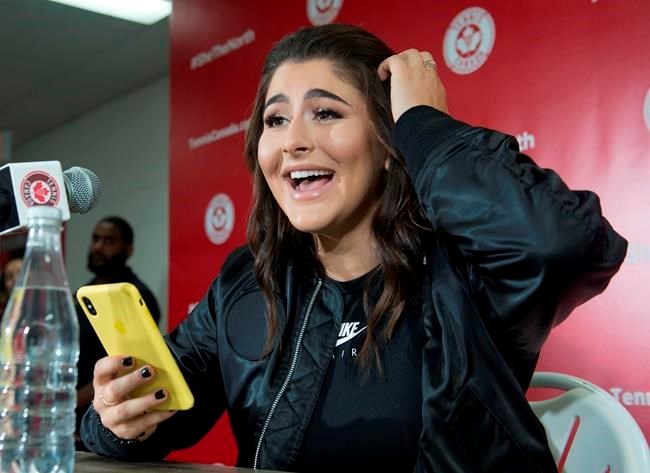 TORONTO — Winning the U.S. Open has made Bianca Andreescu such a big deal that she can leave Drake on read.

Andreescu was on "The Tonight Show Starring Jimmy Fallon" on Monday and mentioned to the talk-show host that she still hadn't heard from Drake, whose hit "5AM In Toronto" had been one of her pump-up songs along the way to becoming the first Canadian singles player to win a Grand Slam.

Drake dutifully reached out to Andreescu after seeing the interview, but the 19-year-old tennis phenom from Mississauga, Ont., didn't reply right away.

"I'm actually having a conversation with him, this is unreal," said Andreescu at a news conference on Wednesday. She then started reading Drake's messages to her out to reporters. "He's like 'here I am, smiley face. Congrats. We are all so proud of you. I've been liking every post with you in it LOL I thought you'd see.'

"I didn't, I was barely on social media. I was just posting things. That was cool. I don't even know what to reply to that. It's going to take me a while"

That's the surreal existence Andreescu has been living since defeating tennis legend Serena Williams 6-3, 7-5, on Saturday in the U.S. Open final.

It's been a whirlwind of talk-show appearances, messages from Drake, Shania Twain, members of the Toronto Raptors, and being flown back to Toronto in a private jet provided by LeBron James's social media platform Uninterrupted.

"I still can't believe I was on 'The Tonight Show,'" said Andreescu. "I didn't think (Jimmy Fallon) was a real person before I actually met him. I've watched his show many, many times and to be able to sit in that chair was really cool."

Nearly 30 reporters, 20 television cameras, and a dozen photographers were at Aviva Centre on York University's main campus Wednesday as Andreescu made her first media appearance in Canada since winning the Grand Slam.

She answered questions about how she celebrated (dinner with her parents), who would play her in a movie (Jennifer Lawrence), what song did she listen to before the U.S. Open final ("Hot Girl Summer" by Megan Thee Stallion) and how her parents and her dog Coco were handling their fame-by-proximity.

"They've been getting a lot of attention too, especially my mom. I think she has her own BuzzFeed post. I think that deserves a round of applause" said Andreescu, clapping and laughing. "It was really funny all the tweets my mom has been getting and obviously my dog Coco."

It was exactly a month ago that Andreescu sat in the same room, addressing reporters after she won the Rogers Cup when her idol Williams retired with back spasms just four games into that tournament's final.

A lot has changed for Andreescu since then.

She has rocketed up the WTA's world rankings to sit at No. 5, made herself the favourite to win year-end awards as Canada's sportsperson of the year, earned US$3.85 million at the U.S. Open and elevated herself to worldwide fame.

Andreescu is hungry for more, however.

"It's time to move on to the next after today, after all this media stuff," said Andreescu. "Of course, today, I'll celebrate a little bit and I'll see my friends. But I'm still focused on what's to come."

Andreescu said one of her immediate goals is to qualify for the WTA Tour Finals in Shenzhen, China next month. She is currently fourth in the standings for that event, with the top eight qualifying. The world No. 5 is expected to make her return to action later this month at the Beijing Open.

The only thing that has slowed Andreescu down this season is an injured shoulder and ongoing tightness in her upper thighs. She has won 23 consecutive matches, not counting when she has had to retire from matches due to injury.

Because of those injury concerns, Andreescu has expanded her team to include a full-time physiotherapist to help her avoid any further issues.

"If I'm healthy than I think I can do even bigger things in the sport," said Andreescu. "One of an athlete's biggest enemies is being injured because we're sitting on our butts watching people play when we're injured. I don't think any athlete likes that.

"The main goal right now is to stay as healthy as I can because I've been injured quite a bit in my short career."

When asked about a possible parade or celebration in Toronto or Mississauga, Andreescu was open to the idea, but said nothing has been finalized.