At birthplace of NFL, last stop for football art collection

CANTON, Ohio — It's the last chance for football fans to see a one-of-a-kind art exhibition devoted exclusively to football, now on display in the birthplace of the NFL.
Aug 2, 2017 5:04 PM By: Canadian Press 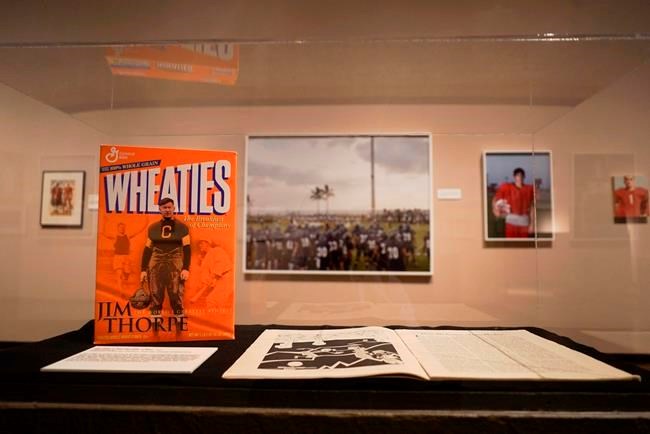 CANTON, Ohio — It's the last chance for football fans to see a one-of-a-kind art exhibition devoted exclusively to football, now on display in the birthplace of the NFL.

The exhibit, titled "Scrimmage," opened Tuesday at the Canton Museum of Art and features 78 works by big names including artists Andy Warhol and Norman Rockwell and football players-turned-artists Frederick Remington and Ernie Barnes.

The exhibition comes as the Canton-based Pro Football Hall of Fame prepares to hold its enshrinement weekend, which kicks off Thursday with a game pitting the Arizona Cardinals against the Dallas Cowboys. Though Canton hasn't had an NFL team since 1926, the NFL was founded in Canton in 1920 by a consortium of Ohio teams.

The collection's curators say it's the first comprehensive display of art about football by American artists in the country. It was the brainchild of curators at a museum at Colorado State University, where it made its debut in 2015.

When the collection was spotted by Max Barton, executive director of the Canton Museum of Art, he knew instantly that it had to come to Ohio.

"I said, 'Is there any reason why this can't come to Canton, birthplace of the NFL?'" Barton said.

Though the pieces date from the Civil War to 2014, the works are organized by theme, not chronology. That's to encourage viewers to ponder common issues that have challenged people throughout football's history, Barton says, touching on topics from gender dynamics to the physical dangers of football.

He sits to watch one work, a seven-minute video. On the screen, football players dressed in white uniforms crouch around a player dressed in black. They pause, then strike, knocking the player off balance. Barton winces.

"This is about some of the questions of the game today," he says. "What are players facing?"

The video depicts a football exercise called Bull in the Ring, once common but now banned by many leagues and teams over concerns of its effects on players' brains.

Other objects on display include a Wheaties cereal box branded with a picture of legendary player Jim Thorpe, the first president of the NFL, and Polaroid photos of O.J. Simpson taken by Warhol in 1977.

It took two years for curators to pull together the display, borrowing pieces from museums and private collectors. By honing in on the intersection between art and football, they aimed to reach sports fans and art lovers alike.

Danielle Knapp, a curator at a museum at the University of Oregon who helped put together the exhibit, said a lot of people were surprised.

"They assumed it would be all sports memorabilia," Knapp said. "It's introducing this material to diverse audiences."

The exhibition will run until Oct. 29, after which the objects will be returned back to their owners.