OTTAWA — A retired Supreme Court judge is calling for urgent reforms to Canada's military justice system to prevent victims of misconduct, sexual and otherwise, from continuing to suffer.
Jun 20, 2021 1:00 PM By: Canadian Press 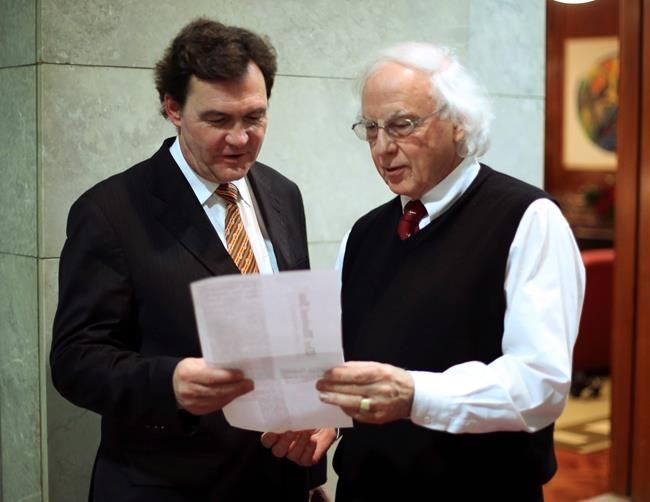 OTTAWA — A retired Supreme Court judge is calling for urgent reforms to Canada's military justice system to prevent victims of misconduct, sexual and otherwise, from continuing to suffer.

Morris Fish says the current system is rife with areas where the potential for interference in police investigations and courts martial from the chain of command exists, which is why action is needed now.

“Reform of the military justice system along the lines developed by my recommendations is no longer an option: It’s essential to protect present and future generations of military members,” Fish said in a recent interview with The Canadian Press.

“So that’s why I say there is an urgent need for reform of the military justice system in order to prevent present and future victims of sexual misconduct and other misconduct from continuing to suffer needlessly and unduly.”

Fish’s comments follow the release of an explosive 400-page report earlier this month on the system that the Canadian Armed Forces uses to investigate and try everything from minor disciplinary infractions to heinous criminal acts.

Fish spent six months starting last November quietly studying the system, which functions separately from its civilian counterpart and is subject to mandatory reviews every decade or so, with his final report tabled in Parliament on June 1.

Much of Fish’s review coincided with the military’s latest reckoning with sexual misconduct as several senior commanders have been accused of improper, and in some cases criminal, behaviour.

Underlying much of the current crisis are questions of fairness and accountability in how the military handles such allegations, with concerns that those higher up in the ranks are treated less severely than those near the bottom.

Rouleau is not only responsible for administration of the military police, who are currently investigating Vance on allegations of sexual misconduct, but has the power through the National Defence Act to issue orders in relation to police investigations.

While Rouleau and the military’s top police officer insist that he has never issued such an order, the vice-chief of defence staff's power was one of the areas of potential interference identified by Fish in his report even before the golf game.

But it was far from the only one, with Fish finding numerous other areas where commanders have both direct and indirect influence over military police, prosecutors, defence lawyers and even judges themselves.

The retired justice heard directly from military police officers and others of instances in which they had either seen interference or otherwise felt like they were not truly independent of the chain of command.

Fish in his report called for all military police, not only members of the Canadian Forces National Investigation Service, to be able to lay charges. As it stands now, non-CFNIS officers can only recommend charges to the chain of command.

“I heard about charging recommendations of members of the uniformed military police being rejected — even for serious offences — on the basis of extraneous and irrelevant considerations,” Morris wrote in his report.

Those included “the performance of the accused in the unit, a wish to give the accused ‘another chance’ or to avoid compromising the accused’s career.” Some officers also worried laying charges could draw attention to their own failure to maintain discipline.

Fish also specifically flagged the vice-chief of defence staff’s ability to issue orders in relation to military police investigations as a serious and clear concern, and called for it to be repealed.

More insidious, particularly in the given context of allegations involving the very top echelon of the Canadian Armed Forces, were the many ways that Fish found the independence of military judges, prosecutors and defence lawyers is threatened.

For example, the director of military prosecutions is appointed by the judge advocate general for renewable four-year terms. While the prosecutor is supposedly independent, “I was told by the DMP that the possibility of renewal makes them vulnerable to political pressures.”

Similar concerns were raised about the defence lawyers assigned to protect troops facing disciplinary or criminal charges. Fish said he heard stories of some being reluctant to cross-examine high-ranking witnesses, especially at promotion time.

Fish was quick to say in his report and by telephone that he has full confidence in the current judge advocate general, Rear-Admiral Genevieve Bernatchez, as well as the military’s current top prosecutor, defence lawyer and judges.

But he says the system’s proper functioning should not be dependent on personalities or individuals.

The retired judge found numerous other problems with the military justice system outside potential interference, including the time it takes to resolve cases, light sentences on convictions and the fact it is legally impossible to court martial a chief of the defence staff.

That could be relevant if military police decide to charge Vance or his successor as defence chief, Admiral Art McDonald. Vance has denied wrongdoing and McDonald has not commented.

Fish also dedicated an entire chapter in his report to the system’s handling of sexual misconduct cases, and many of his recommendations on that front have been accepted outright by the military and Liberal government.

But much of Fish’s report — and many of his recommendations — focused on boosting independence in the system. Those include “civilianizing” military judges, and having senior police and legal officers appointed by cabinet rather than the chain of command.

Yet while the government says it accepts all of Fish’s recommendations “in principle,” it has not given a timeline for implementation.

Fish said he was optimistic they would be implemented, based on the public commitments delivered by senior military leaders and Defence Minister Harjit Sajjan earlier this month, which he believes were approved by Prime Minister Justin Trudeau’s office.

“I cannot imagine … this commitment could have been made without it having passed through the PMO, the highest authorities of government,” he said.

“So I read into this an acceptance not only by the CAF and the (Defence) Department, at least an implicit acceptance by the PMO.”