Quebec reopening plan, Canadian COVID vaccine shows promise: In The News for May 18

In The News is a roundup of stories from The Canadian Press designed to kick-start your day. Here is what's on the radar of our editors for the morning of May 18 ... What we are watching in Canada ...
May 18, 2021 4:15 AM By: Canadian Press 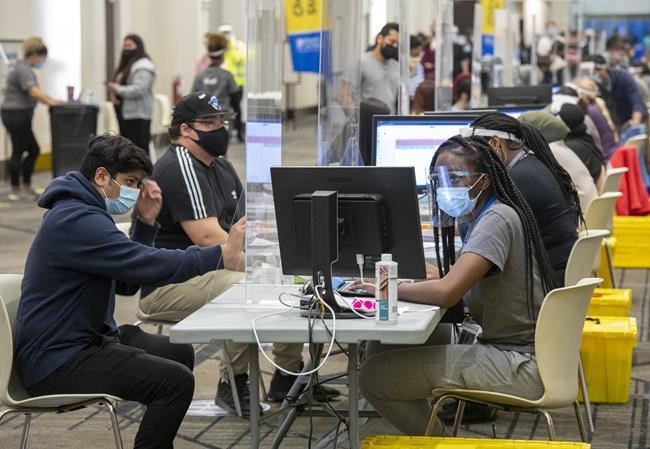 In The News is a roundup of stories from The Canadian Press designed to kick-start your day. Here is what's on the radar of our editors for the morning of May 18 ...

What we are watching in Canada ...

Quebec Premier François Legault is scheduled to announce the province's reopening plan today, which is said to be similar to Saskatchewan's "Re-Opening road map."

Quebec has set a goal of vaccinating 75 per cent of all adults in the province by the June 24 Fête nationale holiday. So far, 49 per cent of Quebec adults have received at least one dose of vaccine.

The reopening plan comes one day after Quebec reported 551 new COVID-19 cases, the lowest number of daily new cases reported in the province since September.

The provincial government is expanding eligibility ahead of schedule after expected doses arrived early.

Mayors in large Greater Toronto and Hamilton Area cities have called for more vaccines to keep up with an expected surge in demand for appointments today.

Medicago executive vice-president Nathalie Landry says the Quebec-based company's vaccine produced 10 times the antibodies in adults compared with those who have had COVID-19.

The results are not yet peer-reviewed but Landry says her team is "quietly confident" the vaccine will also prove to be very effective at preventing COVID-19 infections.

Medicago's vaccine uses a cousin of the tobacco plant to grow a particle that resembles the virus that causes COVID-19 but contains none of the genetic material.

Canada pre-purchased 20-million doses of Medicago's vaccine but most Canadians will be vaccinated before the shot is approved.

WASHINGTON – A case that could dramatically alter nearly 50 years of rulings on abortion rights in the United States is going to be heard by the Supreme Court.

The court agreed Monday to take on the case about whether states can ban abortions before a fetus can survive outside the womb.

Mississippi, which is asking to be allowed to enforce an abortion ban after 15 weeks of pregnancy, is not asking the court to overrule the 1973 Roe v. Wade decision confirming a woman's right to an abortion, or a decision 19 years later that reaffirmed it.

"The court cannot uphold this law without overturning the principal protections of Roe v. Wade," Nancy Northup, president and CEO of the Center for Reproductive Rights, said in a call with reporters.

Even if the court does not explicitly overrule earlier cases, a decision favourable to the state could lay the groundwork for allowing even more restrictions on abortion, including state bans on abortion once a fetal heartbeat is detected, as early as six weeks.

The case probably will be argued in the fall, with a decision likely in the spring of 2022.

What we are watching in the rest of the world ...

WASHINGTON – A lawyer for a 73-year-old man from Pakistan says his client has been approved for release after more than 16 years in custody at the Guantanamo Bay detention centre in Cuba.

Saifullah Paracha is the oldest prisoner at the U.S. base.

He has been held on suspicion of ties to al-Qaida but never charged with a crime. He was cleared by the prisoner review board along with two other men, said Shelby Sullivan-Bennis, who represented him at his hearing in November.

As is customary, the notification did not provide detailed reasoning for the decision and concluded only that Paracha is "not a continuing threat" to the U.S., Sullivan-Bennis said.

It does not mean his release his imminent. But it is a crucial step before the U.S. government negotiates a repatriation agreement with Pakistan for his return. President Joe Biden's administration has said it intends to resume efforts to close the detention centre, a process that former president Donald Trump halted.

Paracha's attorney said she thinks he will be returned home in the next several months.

"The Pakistanis want him back, and our understanding is that there are no impediments to his return," she said.

Paul Joseph Chartier was killed when a homemade bomb exploded in a Parliament Hill washroom. The 45-year-old man apparently planned to bomb the House of Commons.

TORONTO – Daniel Levy is navigating new waters after the success of the CBC sitcom "Schitt's Creek" and finding people are much more receptive to his ideas these days.

The Toronto-raised co-creator and star of the show is working under a three-year overall deal with ABC Studios, a part of Disney Television Studios, which has him developing and producing scripted projects.

Levy says he's picking and pulling some ideas he used to jot down in a journal when he had rare downtime during the making of "Schitt's Creek," which ended its sixth and final season last year.

"Fortunately I'm now in a place where people are really interested in those ideas, which is a stark contrast to when I started and nobody cared," he said from Los Angeles.

"I've been dabbling in the animation world, I've been playing with the concept of what would a thriller look like, I'm hopefully going to be putting a rom-com together for myself. That's always been a dream, to write a romantic comedy for me, because Hollywood certainly isn't. And really exploring all the areas outside of what I had been doing on the show."

"Schitt's Creek" followed the formerly wealthy Rose family as they grew accustomed to a more humble life in a motel in a small town.

Many fans are hoping for a film featuring the Roses, who are also played by co-creator Eugene Levy, Catherine O'Hara and Annie Murphy. But "as of now, there's nothing going on" on that front, said Levy.

The 100th anniversary of groundbreaking research that led to the discovery of insulin is being featured in a new Heritage Minute.

Historica Canada released the latest in its ongoing series which highlights some of the country's crowning achievements.

Set in late 1921, the minute-long video centres on 13-year-old Leonard Thompson, the first patient to receive successful injections for his Type 1 diabetes.

As Thompson's health deteriorates, the short also follows scientists developing insulin at the University of Toronto, including Frederick Banting and Charles Best, as well as J.J.R. Macleod and James Collip.

Insulin is considered by some as the most important medical discovery of the 20th century.

It would eventually lift a death sentence for millions of people around the globe who suffered from diabetes.