The second anniversary of a devastating Saskatchewan bus crash will be a quiet one for the still-mourning families as the COVID-19 crisis holds the country in its grip.
Apr 5, 2020 10:59 AM By: Canadian Press 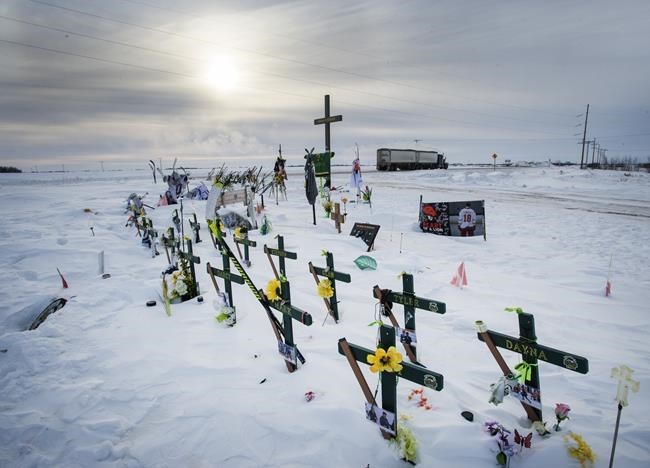 The second anniversary of a devastating Saskatchewan bus crash will be a quiet one for the still-mourning families as the COVID-19 crisis holds the country in its grip.

Sixteen people died and 13 were injured after a transport truck barrelled through a stop sign and into the path of the bus carrying the Humboldt Broncos junior hockey team on April 6, 2018.

Some families hoped to attend a small ceremony Monday in Humboldt, others wanted to visit the crash site, and some wanted to gather with family and friends.

Instead, they'll stay home because of restrictions related to the novel coronavirus outbreak.

"It's going to be a lonely day," said Toby Boulet, whose son, Logan, was killed. "Not as many hugs. We can't get together as a family."

Boulet, who lives in Lethbridge, Alta., said memories from that day two years ago still churn in his mind.

Scott Thomas of Saskatoon said he's only starting to accept that his son, Evan, won't be coming home.

In many ways, Thomas said, it's only gotten worse.

For some of the survivors and their families, there's a different type of reminder about what happened that day.

Kevin Matechuk's son, Layne, suffered a brain injury and his recovery since he woke up from a coma has slowed. A new physiotherapy he was to start in Regina is on hold because of the pandemic.

Matechuk said his son is usually upbeat, but has trouble moving his right side and appears to be losing interest in the sport he once loved.

"His skating improved a little bit, but he drags his right side," he said. "He's starting to realize that it's not going to be like it used to be."

The Matechuk family has been to the crash site many times and was going to visit again on the anniversary before COVID-19 changed their plans.

Myles Shumlanski, whose son Nick was the only one to walk away from the crash with minor injuries, sees the site every day. It's just down the road from the family's home.

He said his son had been playing hockey at the University of Prince Edward Island, but has since quit and come home.

"He couldn't handle it no more," said Shumlanski. "He said he didn't have enough support there and needed to be closer to his family. He just couldn't do the grind anymore."

Ryan Straschnitzki, who was paralyzed from the chest down, still hopes to play for the national sledge hockey team. But his mother, Michelle Straschnitzki, said she's worried about her son's mental health.

For her, the collision could have happened yesterday.

"I'm still at the same place that I was two years ago," she said. "I'm still bitterly angry. I just firmly believe it should never have happened and I hope to God it never happens again."

Her husband, Tom, said the family hasn't visited the crash site and won't until his son is ready. They will be home together on Monday's anniversary, he said.

Straschnitzki said he will turn on the green lights outside their house in memory of those who died and leave them on Tuesday for Green Shirt Day, created in honour of Logan Boulet to promote organ donation.

Boulet, 21, had signed up shortly before the crash to be a donor. Canadian Blood Services estimated that within two months of his death more than 150,000 people registered to donate their organs — a movement that became known as the Logan Boulet Effect.

"We'll get people to take pictures of themselves wearing their green shirts," he said. People will be encouraged to post photos and videos on social media with the hashtags #greenshirtday and #LoganBouletEffect.

In Humboldt, the anniversary memorial and tribute Monday will also be held online.

Mayor Rob Muench said the city had hoped to display some of the thousands of gifts it has received from around the world, but pandemic restrictions changed those plans.

At 4:50 p.m., the approximate time the crash occurred, church bells will toll and a moment of silence will follow.

"Even (with) the situation that's taking place in the world right now," Muench said, "it's important that we do not let this fall through the cracks."

— With files from Colette Derworiz in Edmonton

This story by The Canadian Press was first published April 5, 2020