Essential workers talk about how COVID-19 affects them

Health-care workers, grocery store staff, transit drivers and food delivery workers are among those being hailed as heroes for continuing to provide much-needed services amid the COVID-19 pandemic.
Apr 5, 2020 10:24 AM By: Canadian Press 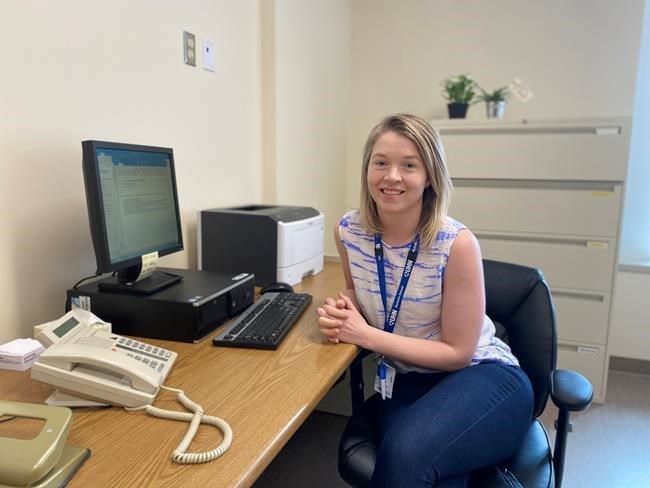 Health-care workers, grocery store staff, transit drivers and food delivery workers are among those being hailed as heroes for continuing to provide much-needed services amid the COVID-19 pandemic. The Canadian Press spoke to people whose work has been deemed essential by their provincial governments, about how the public health emergency has affected their lives:

When shoppers clogged the aisles of a Toronto No Frills store weeks ago in their frenzy to stock up for a potential quarantine, Helen Stathopoulos was the one who directed staff on how to handle the crowd.

Since then, Stathopoulos —  who works six days a week as an associate manager for No Frills and one day a week as a part-time clerk for Loblaws — has had to navigate daily changes to help keep herself, her coworkers and customers safe as officials recommend strict physical distancing to curb the spread of COVID-19.

Her employer and union have worked together to put safety measures in place and provide protective equipment, and staff are striving to support each other emotionally, she said.

"The fear is there, whether we want to admit it or not," she said. "But the demeanour that we have, both my locations that I work at, we all try to keep it light... we crack jokes, we do our thing and we just stick together just to make it through the day, and we take it as it comes."

Stathopoulos, 41, said she is glad to do her part during the pandemic and appreciates the unprecedented wave of gratitude towards grocery workers.

"In my 25 years of working for this company, it's the first time where somebody will actually call to speak to the manager, and not for a complaint but to thank my staff," she said.

Some shoppers have let their fears and anxieties get the best of them, however, particularly as greater restrictions are imposed. Some fight among themselves, others are curt with employees, she said.

At the end of the day, Stathopoulos barely has the energy to pick up groceries for herself, she said, though she tries to stock up on essentials.

"I probably have eaten takeout more in the last three, four weeks that I've had in an entire couple of years. You're just so beaten up after a 12-hour day that you're just like, OK, I need something quick and fast," she said.

Twice a week, she buys food for her 82-year-old mother and drops it off outside the woman's home. Stathopoulos, who lives alone, said not being able to see her family has been the biggest adjustment, but she keeps in touch by phone or video chat.

The pandemic is throwing a wrench in her family's plans to celebrate Orthodox Easter, which coincides with her mother's birthday this year, she said.

"We were planning this absolute massive bash to celebrate Easter and my mother as well, and I think of all these things that we won't be able to do," she said.

"It scares me, it really does, because what does that norm look like in three months from now? Does it slow down, does it not? Does the grocery industry in itself still maintain the same pace as it is right now?" she said.

"We all talk about (how) we're tired, but I think it's not that we're physically tired. I think we're mentally tired."

Many of the people Michelle Anbar-Goldstein works with on a daily basis don't fully understand the public health crisis unfolding around them.

As a social worker, she helps people found not criminally responsible for crimes due to a combination of developmental disability and a major psychiatric disorder, who are either at a facility or in the community.

Some supports, like group work, have been temporarily halted due to the pandemic, but Anbar-Goldstein continues to visit those in her care, navigating restrictions put in place by various ministries and organizations to help contain the virus.

"I am still going into the community and seeing my guys and spending time," the 35-year-old said.

"Just because of the pandemic doesn't mean that we're not having mental health crises. And in fact, it's much worse now."

Part of her job is helping people follow safety measures imposed by health and government officials, but that's proven difficult, she said.

The lack of compliance has contributed to her anxiety over the virus, as well as her family's, even though she practises physical distancing and makes sure to change clothes and shower as soon as she gets home, she said.

Anbar-Goldstein said her husband recently asked why she had sat on the couch during a visit to a patient's home. Her four-year-old son has also shown signs of anxiety over the pandemic.

Her husband and son have at least been able to spend time at her husband's music studio, since no one else has been there in weeks, she said.

"So they get to leave the house and go there and they're playing music together and recording songs. So that's really fun for them," she said.

As for her own concerns, so far they're balanced out by the rewarding aspects of her job, she said.

"While I'm anxious beyond a shadow of a doubt about becoming ill, I also am grateful for being able to leave my house and see people as much as possible," she said.

Along with helping people prepare for life after a major illness or injury, Katie Stock now also helps them think of how they'll manage risks related to COVID-19 as they reintegrate the community.

"Having an injury or an illness that's changed how they function in a time in the world where the entire world has changed how it's functioning is causing that much more uncertainty," said Stock, a social worker at a Toronto rehabilitation hospital.

Some aspects of her work have changed due to physical distancing restrictions and other safety precautions, but the nature of it remains the same, she said.

Phone calls and video conferences are replacing face-to-face communication with patients' families due to a ban on visitors, she said.

"I'm having to do a lot more of that work on the phone and actually trying to send people videos of what things look like because it's really hard to describe how someone's moving or functioning without physically observing it," she said.

Stock said she appreciates the public support shown to essential workers and feels equally grateful for the work done by grocery staff and others whose jobs rarely get the recognition they deserve.

The pandemic has affected how she behaves outside of the hospital, she said, noting she is acutely aware of her responsibility to patients and others in the community not to spread the virus.

She now cycles rather than walking or taking transit, she said, and tries to limit grocery shopping and contact with others, which has meant not seeing her family.

Stock has also discussed safety precautions with her roommate, and makes sure to change clothes as soon as she arrives home from the hospital, she said.

Before COVID-19, Stock said she was rarely home, spending her free time playing recreational soccer and softball, going to trivia nights or concerts with friends, and trying new restaurants.

But public health measures urging people to stay home have brought Stock closer to her roommate, with whom she's been living since November, she said.

The two now cook and eat meals together, go for jogs, and play Dance Dance Revolution, a dancing videogame, she said.

"I couldn't have thought of a better roommate for the pandemic," she said. "She's just so positive and easy to get along with."

As the number of COVID-19 cases rises in the U.S., Ron Kang is finding it increasingly difficult to find truck drivers willing to haul goods across the border.

In some cases, he said, the drivers themselves feel comfortable making the trip, but their relatives are urging them not to, for fear of exposure to the potentially deadly virus.

Kang, who oversees roughly 25 staff and contract drivers, said he's trying to ease their fears and has changed company policies to ensure they have as little contact as possible with anyone outside their vehicle.

For example, truckers can now pay for fuel at the pump, rather than going inside the truck stop, he said. They've also been given masks, gloves and hand sanitizer, he said.

"If you look at it, you're actually quarantined in a truck, but the only time when you get out, you just need to take those precautions and use the protective equipment," he said.

Kang, 43, said he's also wearing gloves to handle paperwork and other materials while working at the company's Toronto-area office.

Though the business has been deemed essential, the shutdown of other industries means fewer goods need to be transported, which — combined with drivers' reluctance to go into the U.S. — is affecting the company, he said.

He's been applying for loans and seeing what payments can be deferred, while counting his lucky stars that the business can operate at all, he said.

Truckers haven't hesitated to take on domestic trips so far, though some are finding it difficult to eat well on the road now that restaurants can only do takeout, Kang said. At least they are once again able to use restrooms in businesses following a plea from government officials, he said.

His family has also had to make adjustments in light of the pandemic, he said.

It was his wife's birthday this week and she couldn't have any visitors, so a friend dropped off a gift at their front door, he said. Meanwhile, Kang picked up a cake at Dairy Queen and a small gift at Shoppers Drug Mart, he said.

The couple's three boys, aged 12, 14 and 16, have been keeping busy at home, which is on a farm property in Caledon, Ont.

"If this thing goes on for another three, four months, at least we can hang out outside without any problems," he said with a laugh.

This report by The Canadian Press was first published April 5, 2020.