LOS ANGELES — As tempting as it might have been for the Colorado Avalanche to look ahead to their showdown with Vegas in two days, Devon Toews knew it wouldn’t matter if they didn’t beat the Los Angeles Kings first.
May 9, 2021 2:19 AM By: Canadian Press 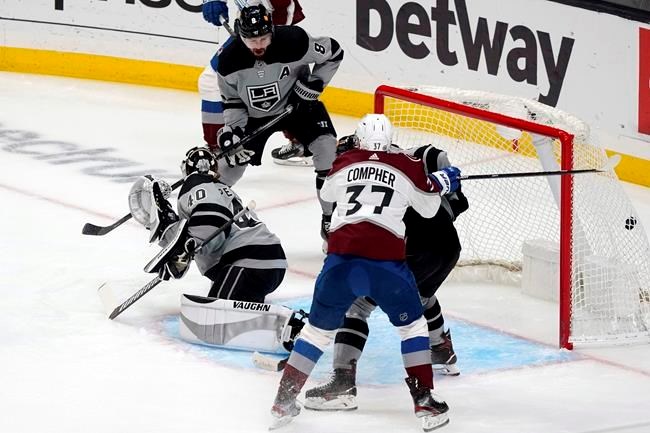 LOS ANGELES — As tempting as it might have been for the Colorado Avalanche to look ahead to their showdown with Vegas in two days, Devon Toews knew it wouldn’t matter if they didn’t beat the Los Angeles Kings first.

He and defensive partner Cale Makar made sure there was no letdown.

Toews scored twice for his first multigoal game, Makar had a goal and an assist for the second straight game and the Avalanche defeated the Kings 3-2 on Saturday night.

Jonas Johansson made 16 saves for Colorado, which can secure first place in the division with a win over Vegas in regulation on Monday and then beating Los Angeles at home on Wednesday and Thursday.

“First meeting we had in the beginning of the year, (the message) was we’re gunning for first,” Toews said. “That’s our goal, that’s what we expect, and we have three games left and we have a chance to do it. It started with these two games in LA here, putting ourselves in a position to be able to do that. We got to go one game at a time, but now we got the big one. We’re ready for it, we’re prepared, and it should be a fun one.”

Playing without top Nathan MacKinnon for the second straight game because of a lower-body injury, it was the blue line that drove the for Colorado’s fourth win in five games.

The Avalanche scored first for the 35th time in 53 games, going ahead on Toews’ eighth goal. The Kings couldn’t clear the puck after being caught in transition, leaving it for Toews to collect and score on a wrist shot from the left circle.

“I just think that’s what we expect to do out there is just contribute offensively while playing against top lines defensively,” Toews said. “You know, our as a team starts in our own zone. If we’re able to close quick and force turnovers and get guys on their heels, and our forwards play with such good pace, it puts a lot of D on their heels.”

Colorado then struck on the power play to make it 2-0, with Makar burying his fourth goal with the man-advantage on a one-timer through traffic at 10:31.

Makar had the primary assist, marking his sixth game this season where he scored and set up goals, including both in the back-to-back set against Los Angeles. He has 11 total multipoint games.

“Best word to describe (Makar) is dynamic,” Colorado coach Jared Bednar said. “I mean, he was all over the ice. He skated unbelievably during both games, he’s making plays, creating scoring chances. Every time he’s on the ice, something’s happening.”

Rasmus Kupari scored his first career goal, Walker had a goal and an assist, and the Kings lost both games against the Avalanche by identical scores of 3-2. Cal Petersen made 27 saves.

“Obviously a great feeling to score my first NHL goal, and I've got to give credit to Lias (Andersson) for his great pass," Kupari said. "I've got time to take that puck and kind of take a look where’s the hole.”

Los Angeles made a strong push in the closing minutes, but Johansson broke up a pass by Anze Kopitar to Andreas Athanasiou during a 2-on-0 break with less than six minutes to go and Gabriel Landeskog blocked Adrian Kempe’s shot in the final three seconds.

“We made a few mistakes and against teams like that with their ability to score, they make you pay, but the character and the drive, there’s nothing there to question," Kings coach Todd McLellan said. "Our guys showed up with it tonight and they pushed, they played hard to a man right through the whole lineup.”

Avalanche forward Andre Burakovsky had two assists for the second straight game. He has three goals and five assists during a five-game point streak.

“I’m just a little bit lucky right now,” Burakovsky said. “Things are going the right way for me and I’m just trying to create stuff. And if it ends up in a goal, I’m happy about that.”

Colorado has swept four straight back-to-backs for the first time in franchise history. They are 8-1-0 in the first game and 6-0-3 in the second.

Colorado Patrik Nemeth played after leaving in the second period Friday because of an upper-body injury.

Avalanche forward Carl Soderberg was a late scratch because of tightness in his back.

Avalanche: At Vegas on Monday night.