TAMPA, Fla. — Joe Pavelski had two goals and two assists to help keep the Dallas Stars' post-season hopes alive with a 5-2 victory over the Tampa Bay Lightning on Friday night.
May 7, 2021 11:13 PM By: Canadian Press 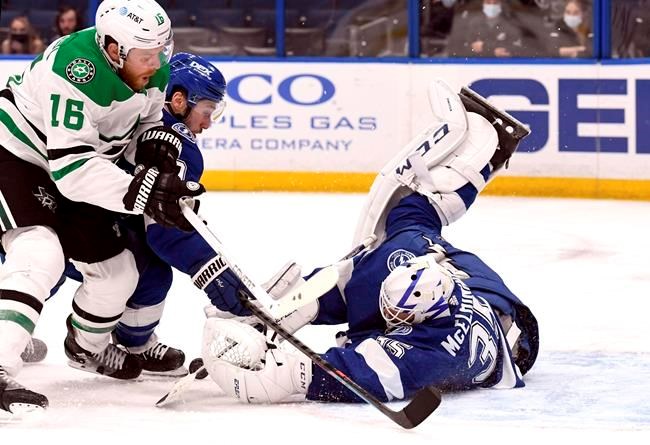 TAMPA, Fla. — Joe Pavelski had two goals and two assists to help keep the Dallas Stars' hopes alive with a 5-2 victory over the Tampa Bay Lightning on Friday night.

The win moved Dallas within two points of Nashville heading into the final weekend of the regular season. The Stars play Chicago on Sunday and Monday, while the Predators host Carolina, which clinched its first division title since 2006 on Friday with Tampa Bay’s loss, on Saturday and Monday.

“Obviously, we had to be desperate tonight," Pavelski said. “We did a lot of good things. Early on, we got pucks behind them, forechecked, we controlled the play that way. It gave us a boost, I think, for sure."

The Lightning, which had a seven-game point streak (6-0-1) stopped, are locked into a first-round playoff matchup with in-state rival Florida, with a two-game set Saturday and Monday at BB&T Center to determine the division's Nos. 2 and 3 seeds.

“We didn’t play very well," Lightning coach Jon Cooper said after Tampa Bay allowed five goals in a game for the first time since April 17. “We didn’t execute, we didn’t defend well and we didn’t play hard in the way we normally do."

Knowing their season would end with a regulation loss, Dallas scored the important first goal when Oleksiak jumped down low to collect a rebound off his own deflection for his career-best sixth goal of the season 5:50 into the game.

“In (Friday’s) morning meeting, we put a lot of focus on two areas," Dallas coach Rick Bowness said. “We need to spend more time deep in their zone, we need to get our () involved, get more shots from our D, which we got tonight, and we need to put more pucks toward the net, which we did tonight.’’

Pavelski exited the penalty box and converted a breakaway for his first of the night at 5:17 for a 2-0 lead.

Coleman scored his 14th to bring Tampa Bay to within one at 13:05, but Pavelski answered with his second of the period, burying a feed from Hintz out of the corner at 13:05.

“I think (chemistry with Pavelski) has been really good for us," Hintz said. “It’s been going good all season together. I think we’ve found each other well and we like to play with each other, so that’s the biggest thing."

Hintz made it 4-1 on a breakaway with 14.9 seconds left in the second period.

Kiviranta made it 5-1 on a scramble play in the Tampa Bay crease at 3:49. Barre-Boulet scored a power-play goal at 8:29.

“Just a lack of attention to details," Coleman said. “We’ve been pretty strong lately on the strong run we’ve been on and for whatever reason we had some pretty glaring errors defensively. We left (McElhinney) out to dry a little bit, unfortunately, and they were able to convert."

Tampa Bay captain Steven Stamkos missed the past month with an undisclosed lower-body injury on April 8, but returned to practice earlier in the week. Stamkos expects to be ready for Game 1 of the NHL playoffs, expected to start sometime next week.

"I’m feeling much better," Stamkos said. “Definitely in a better place than I was a couple of weeks ago. So the goal has always been to be ready come game one of the playoffs. Everything has been trending in that direction, so that’s been exciting. … You can see the light at the end of the tunnel now.”

After delays in the schedule due to COVID-19 protocols and weather-related issues forced Dallas' schedule to be shuffled, Friday marked the Stars’ 42nd game in 74 days dating to Feb. 22. Dallas has not had more than a day off between games and has played eight sets of back-to-backs in that span and the Stars close out the season with back-to-backs in Chicago on Sunday and Monday.

It has been taxing both physically and mentally.

“When you go through 11 weeks of four games every six nights and you don’t get a two-day break in there, it’s a tremendous physical toll," Bowness said. “You can’t help but feel tired and beat up a little bit. The mental side of trying to play at a high level, which you have to do when you are in our position in particular, it’s tough to stay up for every game. But I give our guys credit because they’ve kept us in both and kept us in the hunt."

Stars: At Chicago Blackhawks on Sunday.

Lightning: At Florida Panthers on Saturday.