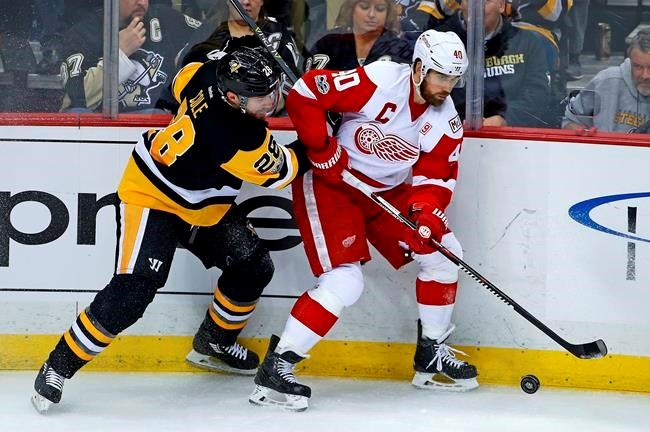 "It's just an unbelievable building," Detroit coach Jeff Blashill said. "It's got to be the best building in the world."

The NHL team that plays there? Well, it needs a lot to go well to surpass low expectations.

The Red Wings failed to make the playoffs last year for the first time since 1990, ending a streak that was tied for the third longest in NHL history, in their last year at Joe Louis Arena . In the , they added a solid , Trevor Daley, and found out forward Andreas Athanasiou may choose to make more cash in the AHL than he would in Detroit.

"We didn't make a lot of changes," general manager Ken Holland acknowledged. "We have to get better internally. We need players to bounce back that didn't produce as much as they or we would like last year, and we need some of our young people to step forward."

In their first season at Little Caesars Arena , the proud franchise will aim to avoid missing out on the in consecutive years for the first time since a five-year drought from 1978-83.

"Coming off a very disappointing season, we know we have to be a lot better," Holland said. "The challenge is, everyone in the Eastern Conference is good and eight teams will make it and eight won't."

Here are some things to watch when Detroit opens the season in its new home on Oct. 5 against Minnesota:

The Red Wings planned on having Athanasiou back this season and they still might, but preseason games rolled on without the restricted free agent signing. His agent said the speedy may leave to play in Russia. If Detroit loses the 23-year-old Athanasiou, who scored 18 goals last season, it might have to settle for a stop-gap veteran to take his place. PA Parenteau, who split last season between New Jersey and Nashville, accepted an opportunity to try out for a team that might need him. The 34-year-old forward had 13 goals and 15 assists last season and has nearly 300 points in his career.

The Red Wings have struggled on since seven-time Norris Trophy winner Nicklas Lidstrom retired in 2012. Niklas Kronwall has been solid, but he is not a star, while Jonathan Ericsson and Danny DeKeyser have been relatively average players. Holland's priority in the was to add one of the top available and he did, signing Daley to a $9.5 million , three-year deal at the start of free agency.

Detroit was one of the NHL's worst teams on the power play last season, scoring just 15 of the time it had an extra skater. Coach Jeff Blashill believes the team will take advantage of opportunities on the power play more often this season because players in the unit will be together for a second season.

"There's chemistry that was built a year ago," Blashill said.

The Red Wings haven't rushed captain Henrk Zetterberg (neck), forward Justin Abdelkader (lower body) or Kronwall (back) into early preseason games, hoping to help them recover from injuries. They need those veterans to get and stay healthy after enduring a season stunted by injuries.

Holland chose to keep Blashill after he won an average of 37 games in his first two seasons as an NHL coach. Instead of starting over with a new coach in a new arena, Holland determined the team's best chance to win was to stick with the 43-year-old Blashill.

"He's one of the youngest coaches in the National Hockey League and if you look at the injuries he had to deal with, those experiences will prepare him to do his job even better," Holland said. "He's won at every level and I'm sure he's learned a lot to help him win at this level, too."