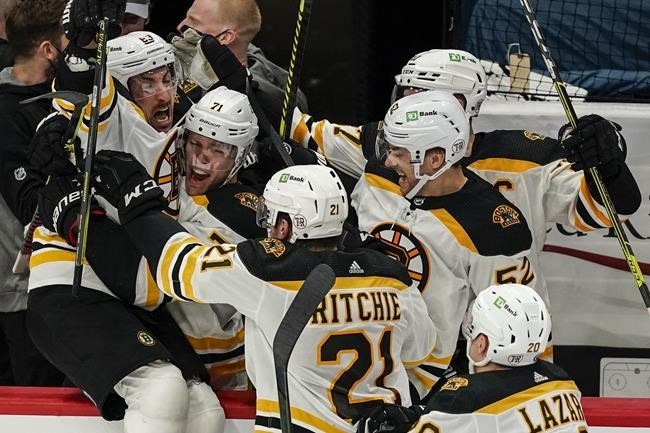 Game 3 is Wednesday night in Boston.

The Bruins were less than three minutes away from pure desperation mode in the series.

Two penalties early in the third period took Boston out of rhythm as Garnet Hathaway scored his second of the game to give Washington the lead with 12:56 left. Anderson — who made 38 consecutive saves after allowing two goals on the first five Bruins shots — was a rock until Hall whacked a loose puck past him with 2:49 left in regulation.

Boston got first-period goals from Jake DeBrusk and Patrice Bergeron, and 36 saves from Tuukka Rask, who was beaten twice by deflections. Hathaway scored twice and T.J. Oshie redirected a shot in for Washington.

Niederreiter hammered the puck past Saros from between the circles at 2:26 of the third, finishing a perfect pass from Martin Necas only moments after Saros had made a terrific stop on Vincent Trocheck.

Filip Forsberg and Erik Haula scored for the Predators. Saros finished with 33 saves.

DENVER (AP) — Nathan MacKinnon scored the tiebreaking goal 30 seconds into the third period and wrapped it up with an empty-netter, Philipp Grubauer stopped 22 shots and Colorado beat St. Louis in Game 1 of their first-round playoff series.

Gabriel Landeskog also added a third-period goal by tipping in a blue-line blast from MacKinnon. Cale Makar got things started for the Avalanche with a power-play goal in the first period.

Colorado kept Jordan Binnington busy through the first two periods, outshooting the Blues by a 32-16 margin. They finally were able to solve him in the third with MacKinnon leading the way.