The New Jersey Devils were one of the NHL's youngest teams this past season, and many times they played like it.
May 13, 2021 3:13 PM By: Canadian Press 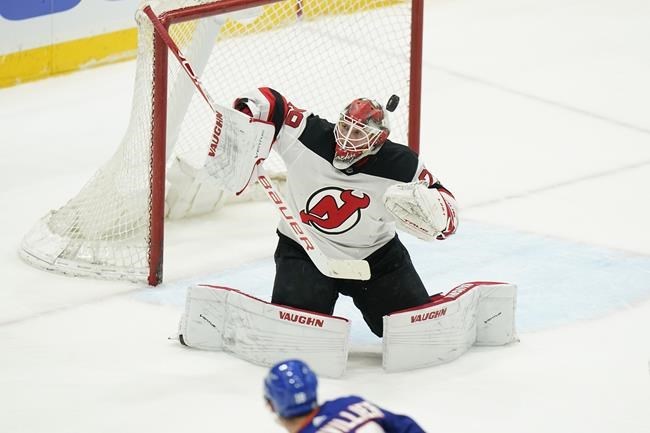 The New Jersey Devils were one of the NHL's youngest teams this past season, and many times they played like it.

Using 11 rookies at times over the course of Lindy Ruff's first season as coach, the Devils made mistakes and showed their inexperience in missing the playoffs for the third straight year and eighth time in nine seasons.

While the 19-30-7 record was disappointing, the Devils showed promise. They grew from hockey infancy in general manager's Tom Fitzgerald's rebuilding effort to walking, although it was unsteady at times. The goal for next season will be to run. There are signs they can.

A stronger Jack Hughes, the No. 1 overall draft pick in 2019, took major steps in his second season. Rookie Ty Smith showed the potential to be a top defenseman. Miles Wood and Pavel Zacha had career seasons with 17 goals apiece and Yegor Sharangovich had a surprising 16 as a rookie. Mackenzie Blackwood showed flashes of being a No. 1 goaltender, but his game (14-17-4) suffered after a COVID-19 outbreak sidelined the team for two weeks in late January.

The really encouraging sign was the team played hard almost every game despite having contests almost every other night after returning from its pandemic pause.

Hughes, who had 11 goals goals and 20 assists in the 56-game season, said Devils fans should be excited about next season.

Blackwood understands some Devils fans might be skeptical after seeing the franchise come up short most of the past decade.

“Even when we were losing, we’re in close games with the best teams,” Blackwood said of being in the tough East Division. “Give the young players a year or two of developing and growing and it’s going to be scary team.”

The Devils should also benefit if center Nico Hischier, the No. 1 overall pick in 2017, can stay healthy. The new captain had six goals and five assists in a season where he was limited to 21 games because of a broken leg in the preseason and a fractured sinus in a game.

“You’ve got to learn from your struggles and you can’t repeat the struggles,” Ruff said Wednesday. “So let’s learn from some of those big mistakes. Let’s get better at the areas in the game that we really feel can push us into a place where we want to be, competing for the playoffs by the end of the year.”

The Devils thought they would go into the season with two top goaltenders in Blackwood and Corey Crawford, who was signed as a free agent in the offseason from Chicago. However, Crawford announced his retirement before the start of the season.

The backup job fell to Scott Wedgewood, Aaron Dell and Evan Cormier. While they have some good games, they combined for a 5-13-3 record.

The Devils don't have any big decisions to make in protecting free agents. Defenseman Ryan Murray might be the best of the bunch. He was one of two regulars who finished the season on the plus side at plus-4 in 48 games. Fellow defense Connor Carrick and Matt Tennyson also are unrestricted.

New Jersey has roughly $11 million of salary-cap space available. They need a goal scorer, a solid defenseman and a backup goaltender. The only had four goal scorers in double figures.

New Jersey might lose one of its young, fast players in the draft to Seattle or Fitzgerald might expose defensemen Will Butcher and/or P.K. Subban and his $8 million salary.