MONTREAL — Moments after scoring his first NHL goal —an overtime winner — Cole Caufield walked, bewildered, into a silent Montreal Canadiens' locker-room. "We were all waiting for him. And we gave him the silent treatment . . .
May 1, 2021 11:36 PM By: Canadian Press 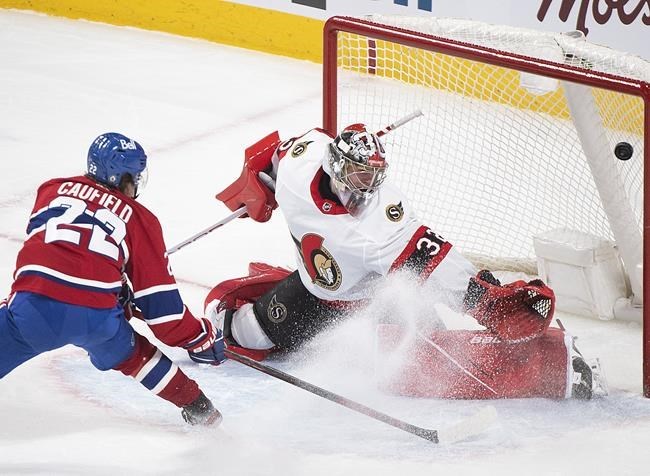 "We were all waiting for him. And we gave him the silent treatment . . . let him sit there just kinda looking around, a little confused. And then yeah, everyone broke out and congratulated him," Montreal's veteran defenceman Jeff Petry said, with a laugh.

Caufield got the winner at 2:25 of the extra period off a feed from Petry to lift the Canadiens to a come-from-behind 3-2 victory over the Ottawa Senators on Saturday.

"I really didn't know what to expect," Caufield said of the post-game locker-room. "But the guys have been great to me. So, I couldn't be happier with the reaction after the silent treatment.

"(Your first NHL goal) is something you always dream about as a kid . . . but to have a moment like that, it's pretty unbelievable. It still hasn't hit me yet. I haven't even seen it, I don't really remember everything about it. But it was a really special moment and I'm just happy to get those big two points tonight."

Tyler Toffoli and Petry each scored and added an assist in the second comeback victory in as many nights for the Canadiens (23-18-9), who pulled to within two points of Winnipeg for third in the North Division.

Caufield, who was taken 15th overall by Montreal in the 2019 NHL draft, only made his Habs debut last week — the latest big moment in a whirlwind year full of them. Caufield won gold at the world junior championship with the United States in January, and then recently captured the Hobey Baker Award as the NCAA's top player (with the University of Wisconsin).

"Really happy, happy for the kid," said Canadiens coach Dominique Ducharme. "It's special to be scoring your first NHL goal in overtime. Happy for the team too, it's a big win. And know we were resilient, we played with attitude and character, and that's something that we talked about the last few days. I liked the way we reacted and it was an happy ending for everyone."

The game was a quick turnaround for the Canadiens after Friday's thrilling come-from-behind 5-3 win over Winnipeg.

The Senators, on the other hand, arrived rested and on a roll. They'd won six of their previous eight games, and climbed out of the North Division basement with Wednesday's 6-3 victory against the Vancouver Canucks.

After a scoreless first period, Stutzle finally got the Senators on the scoreboard at 14:52 of the second period when he snapped a wrist shot from outside the top of the circle over the glove of Cayden Primeau. The goal was the rookie winger's ninth of the season and second this year against Montreal. The first-round pick also has five assists on the season versus the Habs.

Chabot doubled Ottawa's lead at 5:51 of the third period off a beautiful backhand pass from Evgenii Dadonov.

Petry sliced the difference in half with his first goal in 23 games at 8:12 of the third. Sens defenceman Erik Brannstrom bit on a fake by Petry, leaving him open to fire a wrist shot past Filip Gustavsson.

Nick Suzuki, who'd scored twice in Friday's win, appeared to tie the game at 10:37 of the third, but after a video review, the goal was called off for goaltender interference, leaving Ducharme shaking his head in frustration.

The Canadiens, with all the momentum, tied it up for real four minutes later. Toffoli took a beautiful pass from Suzuki to connect at 14:25, his 27th goal of the season. Montreal outshot the Senators 18-3 in the third.

Caufield got the winneroff a feed from Petry.

Veteran winger Corey Perry scooped up the puck as a memento for Caufield. Eric Staal went immediately to congratulate the 20-year-old newcomer.

"Those guys are legends," Caufield said. "I was talking to my parents the other day about how cool it is just to be in the same locker-room and on the same team as those guys because you grow up watching them and they're such unbelievable people, and they've been so great to me."

Caufield said the puck would "go somewhere special . . . to hear that Corey picked that puck up is something that I'll never forget too."

Primeau made just his second start in net for Montreal in place of Jake Allen, who had played 12 of the previous 14 games. Primeau also started in a 5-2 loss to Calgary a week ago. His lone career NHL win came against the Senators on Dec. 11, 2019.

The Senators had Gustavsson in net in the latest of their revolving door of goaltenders. Ottawa has used five goalies this season, and recently lost Matt Murray to a lower-body injury.

The game was the ninth of 10 meetings between the two teams this season, with the Canadiens now holding a 4-3-2 record. Montreal lost the previous two games 6-3 and 4-0.

Montreal hosts the division-leading Toronto Maple Leafs on Monday. The Senators are at home to the Jets on Monday.

This report by The Canadian Press was first published May 1, 2021.