WASHINGTON — Falling flat after an emotional week, the Washington Capitals cost themselves their easiest path to a division title and showed worrying signs with the playoffs approaching.
May 7, 2021 10:11 PM By: Canadian Press 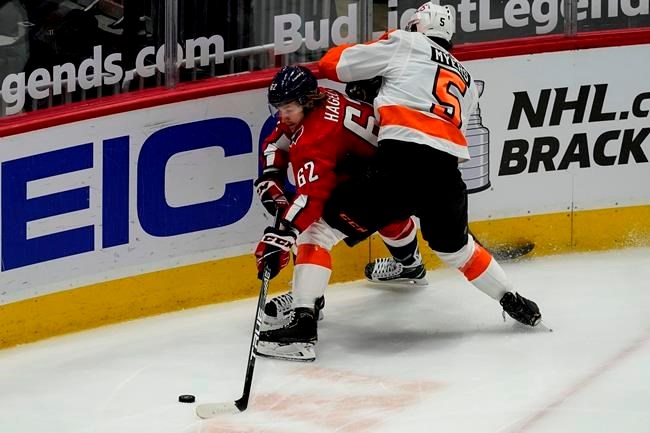 WASHINGTON — Falling flat after an emotional week, the Washington Capitals cost themselves their easiest path to a division title and showed worrying signs with the playoffs approaching.

The Capitals lost to the Philadelphia Flyers 4-2 Friday night, missing their chance to reclaim first place in the East Division. They trail the Pittsburgh Penguins by two points with two games left on their regular-season schedule.

A victory in their regular-season finale against last-place Buffalo on Saturday and another Washington loss to Philadelphia hours later would clinch the division for Pittsburgh.

“They’re big points for us that we let get by here, so there can’t be any excuses,” Capitals coach Peter Laviolette said. “We needed to be better. I just thought we were just on our heels too much.”

Long since eliminated from playoff contention, the Flyers nevertheless outplayed the Capitals, who were again without captain Alex Ovechkin and Justin Schultz because of lower-body injuries and top Evgeny Kuznetsov, who's on the NHL COVID protocol list. Rookie goaltender Vitek Vanecek allowed three goals on 28 shots in his third consecutive start with Ilya Samsonov also out for protocol reasons.

“There were times in the game where we were the better team and there were times where we put out foot off the gas and they had their chances,” said Washington's Daniel Sprong, who scored his sixth goal in his past six games and has 13 this season. “We know playoffs is coming up, and that’s not how we want to play.”

Capitals winger T.J. Oshie scored his fourth goal in the past two games since the death of his father, but the Capitals' comeback bid from a 3-1 deficit fell short.

“We didn’t capitalize on a couple chances, and we kind of dug ourselves too big a hole to get out of,” Oshie said. “Those aren’t types of games that we want to have at this point in the year.”

Flyers rookie Wade Allison scored twice, and Brian Elliott made 28 saves. Joel Farabee took advantage of a defensive-zone miscue by Washington to open the scoring 1:44 into the game, and Sean Couturier sealed it for Philadelphia with an empty-net goal with 30.1 seconds left.

“I thought our whole group skated well,” Flyers coach Alain Vigneault said. “I liked the energy we brought to the table.”

Ovechkin has missed six of the past seven games and played a total of 39 seconds in the past two weeks. The six games out with injury matches the most of any season in Ovechkin's career.

Yet even without Ovechkin, Kuznetsov and Schultz, salary cap-strapped Washington was able to dress the full complement of 18 skaters for the first time in three games. The Capitals won the previous two with 17 skaters.

“It seems like it’s been the ‘Adversity Caps’ this year on many different fronts,” right winger Tom Wilson said. “A couple guys are dinged up, but I think it says a lot about the coaching staff, about management, about the character in our room that no matter who’s out, who’s playing you’re able to win games and kind of collect wins.”

Top Flyers prospect Cam York made his NHL debut, giving the team something to celebrate at the tail end of a disappointing season. York, who captained the U.S. to a gold medal at the world junior championship and played at Michigan, got the solo lap treatment at the start of warmups and was paired with veteran Justin Braun.

“The first shift, you got some shaky minutes, but after that they feel good,” said York, who played just under 21 minutes with his parents in attendance. “Once you get into the game, you’re in it and it’s just another hockey game. It was nice to get the first one out of the way.”

The Flyers and Capitals face off for the eighth and final time this season Saturday night, with Washington looking for a sixth victory in the rivalry series.