Thatcher Demko doesn't have many complaints about his personal circumstance during the COVID-19 pandemic. Holed up just outside San Diego, Calif.
May 14, 2020 2:39 PM By: Canadian Press 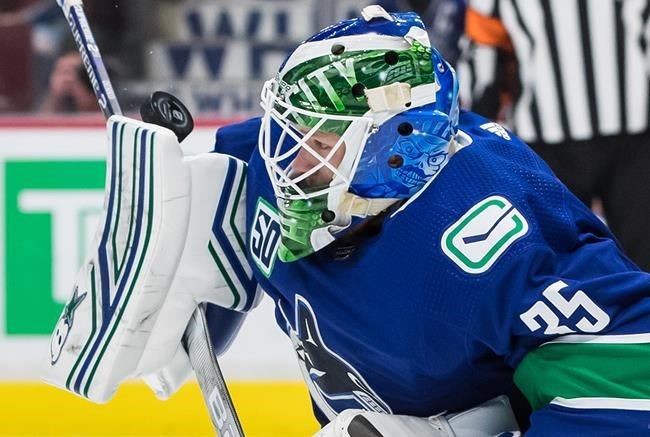 Thatcher Demko doesn't have many complaints about his personal circumstance during the COVID-19 pandemic.

Holed up just outside San Diego, Calif., the Vancouver Canucks goalie has been enjoying the warm weather and doing home workouts — like most NHLers, it's his only option with arenas and team facilities closed — in an effort to stay in shape.

A recent text message from crease counterpart Jacob Markstrom, however, had him wishing he could trade the sun and sand for Sweden.

"He was like, 'I just got my gear shipped out. I'm skating tomorrow,'" Demko said. "I was just like, 'Oh my god that's awesome.' I would be in such a better mental state if I could be getting on the ice.

"I was joking with him that I might have to fly out there and crash on his couch."

Markstrom, the Canucks' No. 1 netminder, and other Swedish players have been allowed on the ice because officials there chose a different path compared to many countries — including Canada and the United States — with regards to lockdown rules during the novel coronavirus outbreak.

HockeyNews.se posted videos of Markstrom going through drills with two other goalies and a coach on Instagram, while New York Rangers veteran Henrik Lundqvist shared a clip on his official account of an empty locker room and pictures of on-ice action with the caption: "Back at it."

Demko was happy to see Markstrom getting some work in, but also joked he wishes he was born in Sweden.

"Glad he's getting on the ice," the 24-year-old said on a recent conference call. "That's got to be nice."

Thrust into the job as Vancouver's starter when Markstrom went down with a knee injury Feb. 22, Demko pointed out it will take some work to get close to where he left off two months ago if the league eventually gets the green light to resume the season.

"This is probably the most time I've been off the ice since I was eight or nine years old," Demko said. "It's definitely an odd feeling — a feeling that can be overwhelming sometimes. You just don't really feel like yourself.

"It's an opportunity to relax."

And in some of those quiet moments when he isn't taking care of his new puppy, Demko has reflected on his first full-time stint in the NHL.

Like many young netminders there were highs and lows — moments where he looked like the Canucks' goalie of the future, and others where he seemed to wilt under the expectation of a team grinding to get back in the playoffs for the first time since 2015.

Demko wobbled after Markstrom first went down, but felt like his game was trending in the right direction when the league suspended play March 12.

"It just really showed me the difference between being a backup and being a starter," he said. "Having that added pressure, having those added minutes, it's a big jump. It was awesome for me to see that firsthand and understand what came with that responsibility."

"He was never shy about it," Demko said. "He's like, 'You're in a position right now where it's a little bit of added pressure. You're gonna either deal with that or crumble. It's up to you.'"

The goaltender rebounded with a .915 save percentage in his next four starts to push the Canucks within a whisker of the second wild-card spot in the Western Conference when the NHL pressed pause.

"At that time of year it's all about the result," said Demko, who would be subject to a 14-day quarantine after returning to Vancouver if the NHL opens team facilities. "Had I been thrown in that situation in December or January, when maybe the stakes aren't as high, it would have been a different feeling, different environment.

"I hadn't really felt that much pressure in a long time."

Demko is keenly aware that the 30-year-old Markstrom's contract is up after this season, but said he hasn't thought beyond the 2019-20 campaign because there's a chance the games will return.

He's keeping up to date on potential league scenarios, including a rumoured 20- or 24-team playoff format that would follow a training camp.

It's also clear there's no perfect solution. Arenas will be empty, the post-season tournament will look nothing like it ever has before, and groups of teams might be quarantined in so-called "hub cities" for health reasons.

"Everyone's gonna have to make a sacrifice — players, owners, union," Demko said. "I don't think that there is a scenario where everyone's going to be happy with the situation.

"I'm kind of just going to go with the flow."

He'd just feel a little more comfortable if he was Swedish.

This report by The Canadian Press was first published May 14, 2020.