This area had been declared unsafe to travel without a permit
Sep 11, 2019 8:30 PM By: BayToday Staff 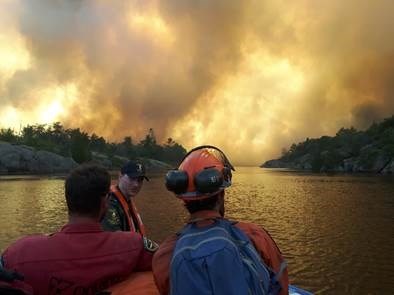 A Toronto man found that ignoring forest fire zone travel restrictions can be a costly gamble.

He violated an Emergency Area Order and an Implementation Order, which were put in place to protect public safety and to allow for effective forest fire suppression efforts to be carried out last summer.

On July 28, 2018, conservation officers were notified that a man had entered a forest fire emergency area in a restricted fire zone that had been established on July 21.

At 11 a.m. that same day, while in a boat patrolling to make sure no one was in the restricted fire zone, conservation officers spotted Dale Roddick paddling a small canoe in the Key River Basin, west of Port Loring. This area had been declared unsafe to travel without a permit. Roddick had camped on the near shore islands of Henvey Inlet for two nights.

On July 12, 2019, before Justice of the Peace Diane Lafleur in Sudbury, Roddick pleaded guilty to violating an Emergency Area Order and Implementation Order and was fined $2,500.