This week, Vin muses over a problem with taking wine on airplanes and shares some interesting stories about wines as well as his picks for quality wines at excellent prices
Jun 3, 2017 11:21 AM By: Vin Greco

Vin Greco, Wine All The Time

Frequently, interesting stories surface from the world of wine, many appearing on-line courtesy of The Wine Spectator.  Here are a few which caught my attention..

Usually, when it comes to “wearing wine”, it probably means somebody has splashed a lovely red wine all over one’s shirt or dress.  Recently, Italian architect and designer, Gianpiero Tessitore has found a way to convert pomace, the stuff left over after the wine has been pressed, into a leather-like synthetic fabric that might one day make its way on to furniture, be made into handbags or even clothing,.

Tessitore describes it as an “eco-friendly” alternative to traditional animal and synthetic leathers.  What makes it even better is that Italian wineries are happy to donate the pomace, which is often just waste, free-of-charge.

In the Languedoc region in the south of France, we learn that not all wine spills are accidental. There, protests are escalating as young French winemakers contend that cheap Spanish wine, packaged at times in ways that persuade consumers they are buying French, has been undercutting local producers who can’t compete, given their higher taxes and labour costs.  Spanish wine is almost half the price of bulk wine from France.

French growers have stopped tanker trucks filled with Spanish wines at the border, and in one case, emptied the contents on to the pavement. They have also raided supermarkets, sweeping bottles and bulk cartons on to the floor, smashing them open.

The Jeunes Agriculteurs, aren’t shy about revealing their identity, though they have also softened tactics, and will meet with top supermarket retailers to find a solution. They hope to negotiate long-term contracts and partnerships with the retailers and the négociants; that is, the wine merchant middle-men.

Ironically, the French industry has promoted the production of wines of higher quality, whereas the Spanish have embraced a model that allows for large scale, low-end, mechanized production, resulting in loads of inexpensive bulk wine.  To compete, the French would have to change regulations and production methods, including the move to vines that are higher producing, though of lower quality.

The young protesters are sceptical that this would work, saying it would set the industry back 20 years, and even then they would be unlikely to match the lower Spanish costs. There may be more spillage yet.

Even in Spain, there can be wine Blues, as the Wine Spectator reported back in March. In this instance, it involves a confrontation over the production of a blue wine. For a couple of years, the industry has been opposed to “Gik” a wine made from red and white grapes, with a blue complexion resulting from two organic pigments, one from red grape skin, and the other a food dye.  The producers have altered the composition so that it is 99 per cent wine and one per cent grape must (There’s that pomace again!). They are actually hoping to get the product to North America this year.

On a more serious note, as the Globe and Mail reported last Saturday, the owners of Lulu Island Winery in Richmond B.C. have been charged with smuggling for falsifying prices on wines they shipped to China.  John Chang and his wife, Allison Lu are said to have declared the prices under $10 for wines which would sell in Canada for up to $95. Chang said that he had placed his trust in the expertise of a Chinese Customs clearance firm, and thought his prices were fair.

Chinese criminal law classifies anyone who evades payable duties as a smuggler, for which the maximum punishment is life in prison and a fine of up to five times the amount owed – in this case it is claimed to be $20 million, and they have had 267,000 bottles of wine confiscated.

It is a dire situation for the winery owners, and reminds me of the high Chinese interest in Canadian Ice Wine, with Chinese ownership of wineries in Ontario also on the rise. 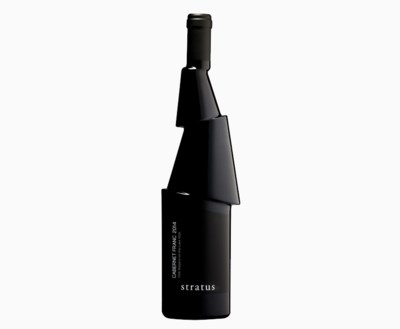 And now, something very new: from one of the top wineries in Niagara-on-the-Lake, a “de-constructed” wine bottle, designed for Stratus’s 2014 ‘Decant’ an unfiltered Cabernet Franc. The brain-child of industrial designer Karim Rashid, it might, just from appearance alone, be easily attributed to Picasso.  Rashid “chopped up a black glass wine bottle and stacked the pieces back together, not unlike how Stratus’ clay is interspersed with limestone and granite” writes the Wine Spectator. Apparently the edges will catch the sediment during pouring, acting like a decanter.

Finally, reader Bill Kerr wrote to me about his frustration with not being allowed to carry wine onboard air flights when you aren’t checking any bags. He had been visiting wineries in Prince Edward County, and wanted to bring a couple of bottles home.

When you purchase duty-free spirits or wines at an airport, you are able to carry them on-board. Why can’t we come up with a system where-by wines purchased from Canadian wineries could be packaged and duly sealed for carry-on purposes? It would certainly be a benefit to the industry.

As for potential risk that the package could be dangerous, they have all the equipment at the security clearance to ensure that it is safe. I recall on one trip having a bottle of duty-free Grand Marnier confiscated because it set off some signal indicating possible explosives – the only thing I could think of is it was in my carry-on along with the little nitro-spray for a heart condition. If the equipment is that sensitive, surely there can be a solution other than having to pay $25 to check a bag.

I am not sure what the answer is. In correspondence with Transport Canada Bill got nowhere, but would hope that the wine industry might be able to lobby more successfully.  Any thoughts?

At the Wine Rack

A new label, Rugged Roots, has recently been launched and should attract some admirers.  The Sauvignon Blanc displays the goose-berry and grapefruit notes often associated with this varietal; however, with 10 grams of residual sugar, the acid bite on the finish has been softened. It is just a shade off-dry, unusual for Sauvignon Blanc, and should be a most appealing sipper this summer.

The companion Rugged Roots Merlot is soft, smooth and satisfying. There is enough body here to carry the day, and while it isn’t really complex, it is friendly, undemanding and easy to like.  It has 5 grams of sugar per litre, which means it is still pleasantly dry.

I recently tasted three of the red wines on limited-time-offer in vintages, and found that the Gnarly Head Old Vine Zinfandel, $3 off at $14.95 was the most pleasurable - and least expensive.  Dark brambleberry fruit underpins a very tasty red with good depth and length – a great choice with barbecued beef, or even chicken.

While there were no faults, I found the Ranch 32 Cabernet Sauvignon, $2 of at $22.95,  a bit too one-dimensional – clean, but needing more complexity.

Chapoutier’s Bila-Haut Occultum Lapidem, $2 off at $23.95, is a very good red from the south of France, one that normally would be right in my pleasure zone.  It is very well integrated with good depth, and nuanced dry flavours, but the Gnarly Head was just yummier – that’s all there is to it.

On the general list, consider comparing two inexpensive Viogniers, Chile’s Cono Sur Bicicleta, now $10.10, and Australia’s Yalumba Y Series, now $12.95, both $1 off. Viognier, the white grape of Condrieu, is noted for its apricot and peach flavours, creamy texture, yet crisp finish. Both these examples are excellent value.

Bellingham Homestead Series the Old Orchards Chenin Blanc 2015, $15.95 – Chenin Blanc is a South African specialty, and this example is a winner.  In Platter’s South African Wine Guide, all the Bellingham wines are highly rated.  The Chenin Blanc also has a 93 from the reliable decanter.com. 2015 was a “Goldilocks” Vintage, neither too hot or too cool, and the ripe stone  fruit has terrific concentrated flavour – expect honey, sweet orange and lime, along with the suggestion of peach.

Wildass Rosé 2016, $16.95, from Stratus Vineyards tends to be one of the more deeply flavoured rosés, and may be just this side of what you could expect from a light red wine. Here, tangy Ontario rhubarb and sweet strawberry seem to be at play, along with fresh herbal notes.

Chateau Val Joanis Tradition Rosé 2016, $15.95, is a consistently good Rosé from the Rhone. Dryness is key in a mouth-watering and refreshing sophisticated sipper.

Sister’s Run Bethlehem Block Cabernet Sauvignon 2014, $18.95 is an Australian favourite, year in and year out.  It is delicious with ample dark currant fruit, spice, and a smooth texture.

Tawse Gamay 2014, $19.20, is a lively Gamay (The Beaujolais grape) from Niagara, now with a bit of bottle age.  It is mid-weight and earthy with lots of fruit on the nose and black cherry and pepper on the palate. It has impressive length and concentration.

Mazzei Belguardo Serrata 2014, $19.95, has the IGT Toscana designation, an indication of a wine that blends Sangiovese with other less-typical grapes, in this case, Alicante (one of the old stand-by grapes for home winemakers, along with zinfandel). This wine is rich and full-bodied, with dark berry and balsamic notes, and spent 10 months in small oak barrels.